I have finally put the finishing touches on another project for my dune buggy today.  One of the features that was built into this fabulous little vehicle was a set of independent rear brakes.  In order to operate these brakes a set of levers were installed between the seats to activate either a left or right rear brake when driving the dune buggy in the sand.  Dune buggies don't steer very well in the sand and so the independent brakes are needed.  Since I never plan on driving my dune buggy off road these levers and of course the independent brakes serve no real purpose other than to look nice. So this project was born. 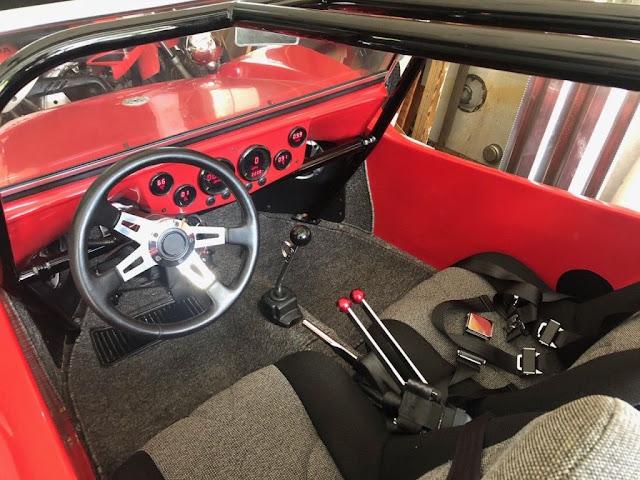 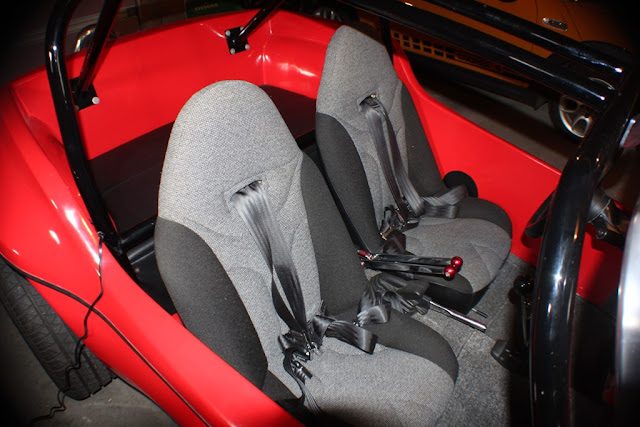 Here you can see the two levers between the seats that look nice and all but serve no purpose when driving the car on the street.  So these had to go. 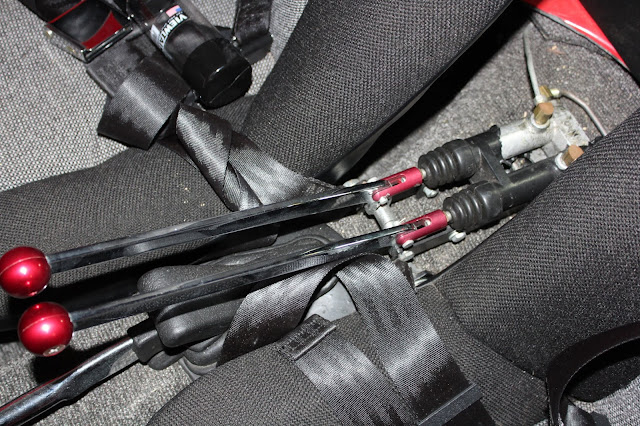 Here's another reason to get rid of the levers and cover up the hydraulics that are between the seats. The original builder of the car lived in Arizona and so the brakes for driving in the desert are what is needed but this car never saw the sand much less even rain.  Everything else in the car is near perfection but I could not stand the look of the hydraulics between the seats.  It threw the look of the interior right out the window. 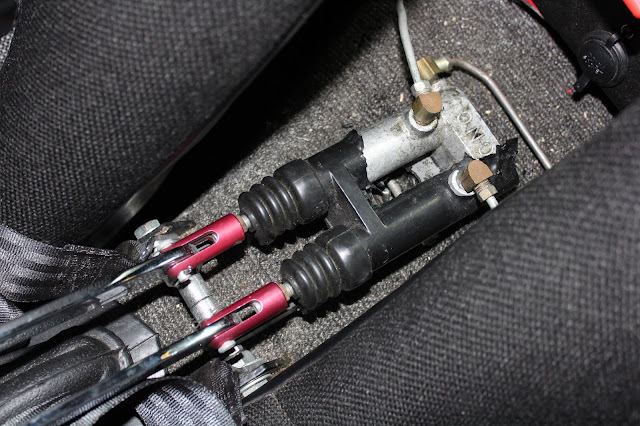 With a closer look you can see how badly this all looks. The guy that built the car did an excellent job but gave up I think when he got to this point in the build. I did not want to actually remove the hydraulic setup as the next owner after me may want to drive the dune buggy in the sand.  So the actual hydraulics will stay. 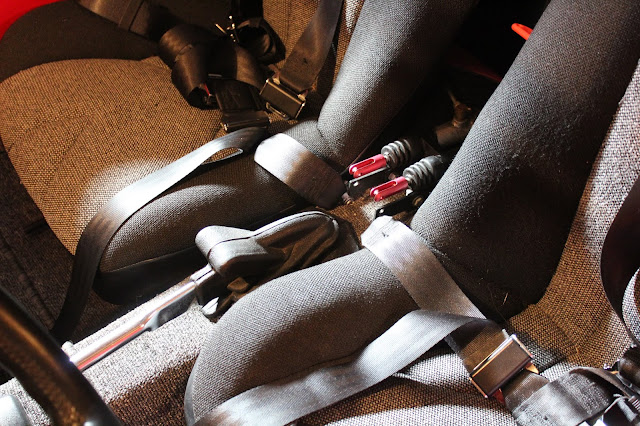 I simply removed the levers which in itself cleaned up the interior of the car quite a bit. To remove the levers took me only a couple of minutes and I've stashed them away with a pile of other things that I will save when I decide to sell the car some time in the distant future. 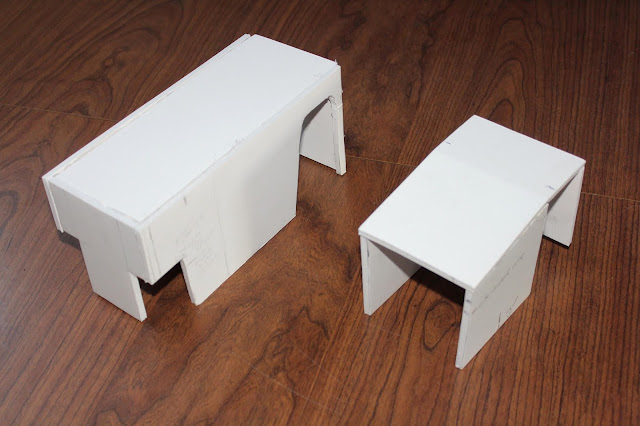 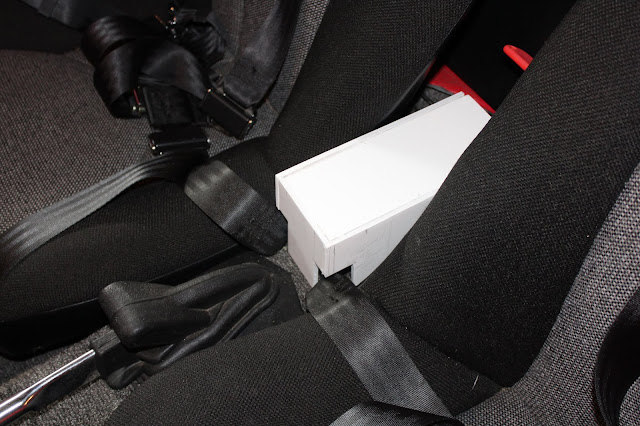 To figure out how big the new housings to cover up the hydraulics needed to be I simply took some basic measurements and made a couple of foam core boxes. In the top photo you can see both foam core covers that I had worked on.  The smaller cover would be used to just cover up the brake hydraulics and still use the brake levers.  The larger cover is the one I will use to cover the all of the hardware after the brake levers have been removed. I slid this larger foam core cover over the hydraulics and hardware that was left after I removed the levers to make sure that everything would fit properly. 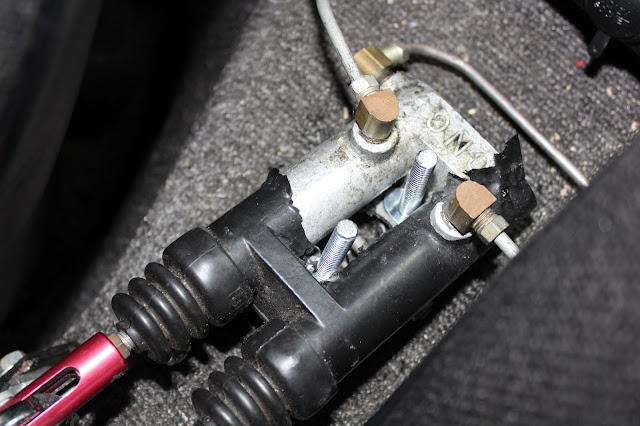 The real puzzle I needed to solve to mount the new housing was how to secure it to the hydraulic cylinders so that it would not come loose after driving the car for some period of time.  In the photo above you can see two bolts that extend upward between the two cylinders.  These are known as "T" bolts and I was able to slide them between the cylinders and then rotate them 90 degrees so that they would not come out.

With most all of my projects I do some testing of parts to make sure everything will go together smoothly during the final assembly. This project was no different.  Pictured above are six test parts that I needed to lock down the final center mount for the new housings.  As you can see a lot of changes were made to finally come up with the finished part pictured below. 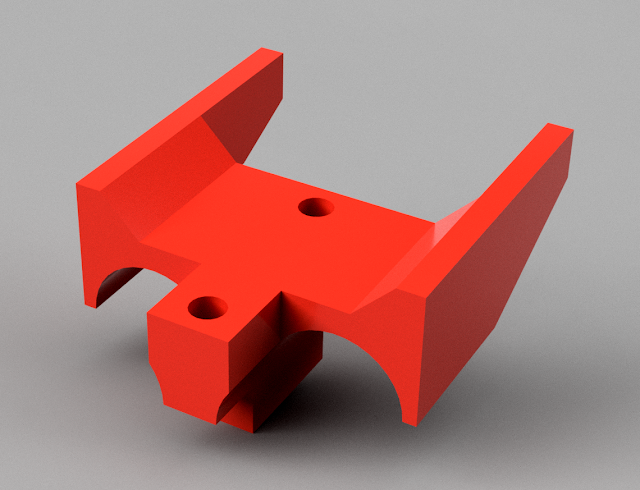 This is an image of the final design for the center mount that slides down over the two bolts that hold the housing in place and over top of the two hydraulic cylinders.  This took me a while to figure out but is the key to the puzzle of how to mount the housings. 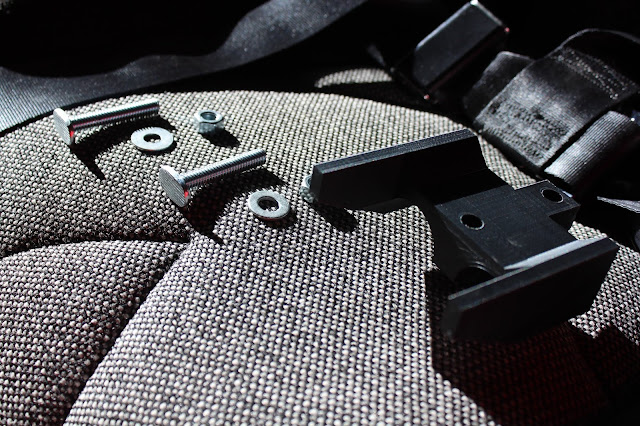 In the photo above you can see the "T" bolts placed on the driver's seat along with a 3D printed center mount that I designed and 3D printed. 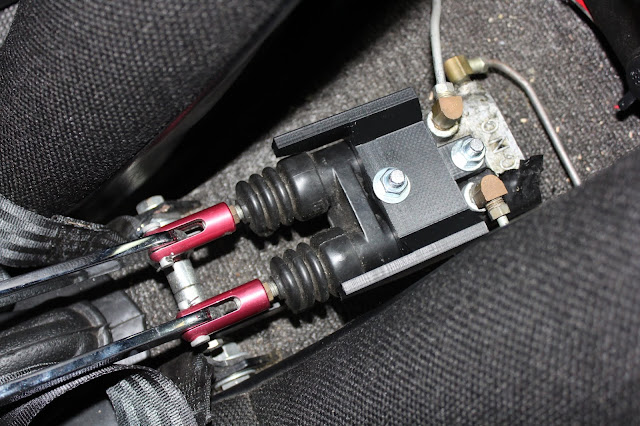 Once this center mount was securely fastened to the hydraulic cylinders with washers and nuts I could move on to the next step in making the new housings. 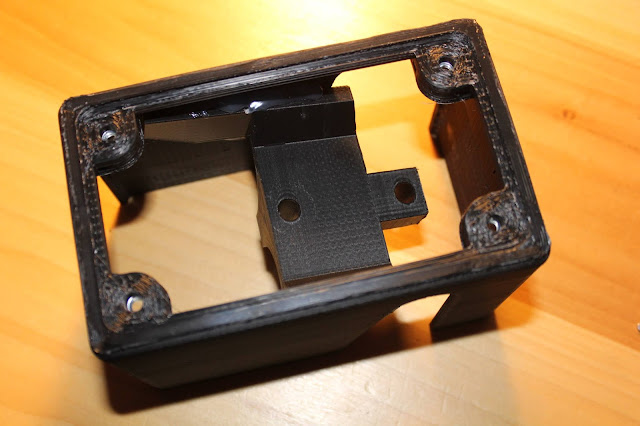 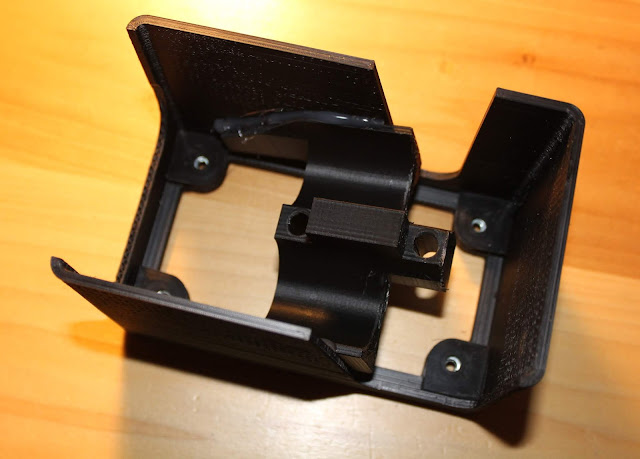 I was able to easily slide the housing to cover up the hydraulics over top of the inner mount.  The center mount was the exact width of the inside of the housing. Once this was in place I only needed to use a hot glue gun to lock the inner mount to the outer housing. In the photos above is pictured a smaller housing that I had built that would allow use of the brake levers and still cover up the ugly hydraulics that make the brakes work. 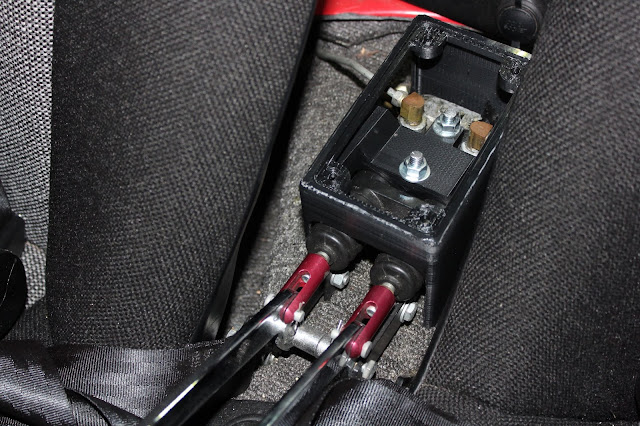 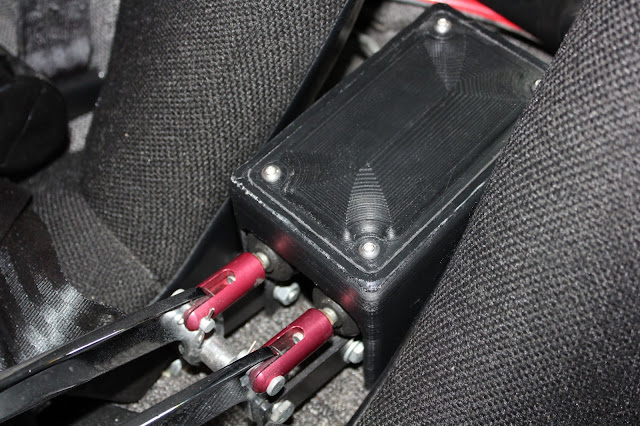 This is how the short cover looked before the cover was smoothed and painted glossy black. Even without it being smoothed out the look is a big improvement over what was there from the start. 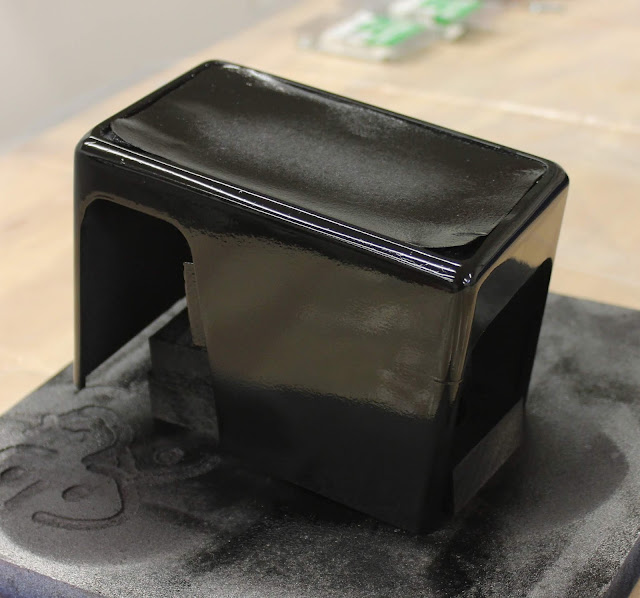 Here is what the short cover looked like after it had been smoothed out and painted.  The cutout on the left side of the cover so to allow the hydraulic lines to come out from under the cover and still be hooked up for use.  The opening on the right side of the photo is where the levers would extend out for the brakes. 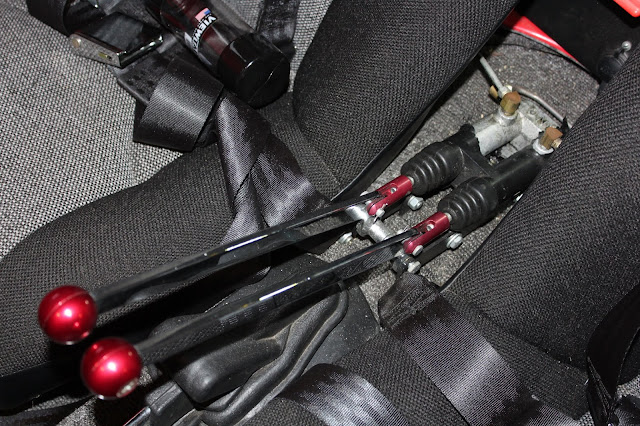 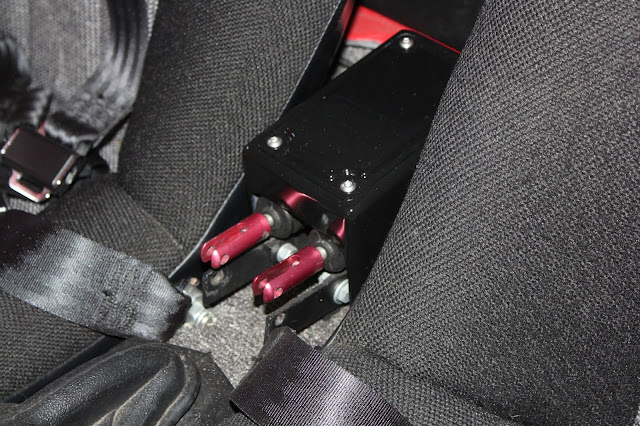 In the photos above you can see how much better the interior of the car looks after I put the short cover into place over the brake hydraulics.  A vast improvement.  Again I will set this short housing aside for the next owner as I will not be using it while I own the car. 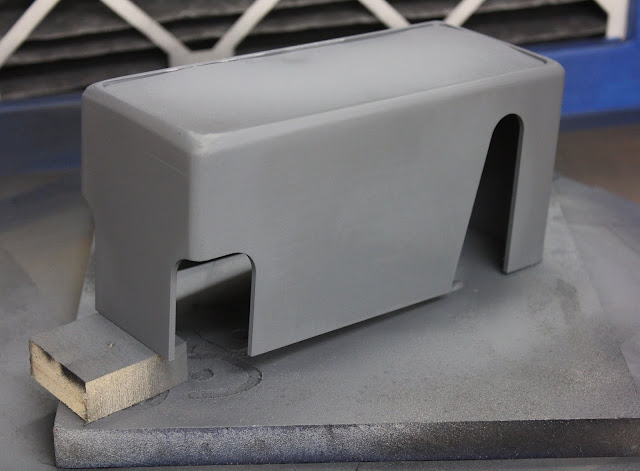 But getting back to the setup that I needed, here is the larger housing that will cover up everything that was left over after removing the brake levers.  The new housing already smoothed out and spray painted with primer is shown above.  Again the large opening on the right side of the picture of the housing is where the hydraulics will come out from under the housing. On the left side it is set up a bit differently than the smaller housing.  The openings here were needed to allow the cover to clear the mounts for the seat belts. 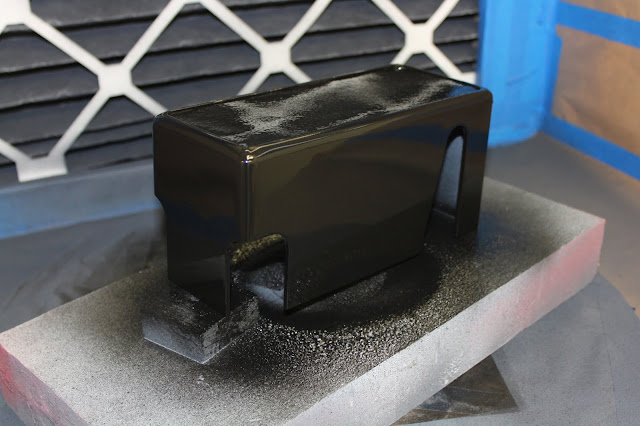 Here is what the cover looked like once it had been painted a nice glossy black. I used a simple little carboard cover on top of the house at this point just to keep paint out of the holes where the nuts are installed for the mounting bolts for the top cover. 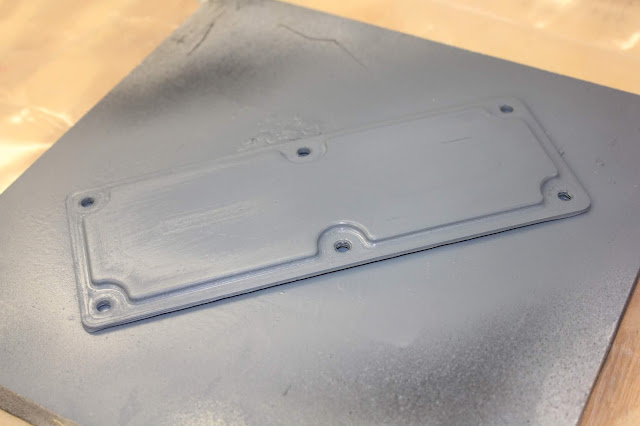 This new top cover for the housing also needed to have six small bolts to hold it in place rather than four bolts with the smaller cover.  Here once again it was sanded smooth and several coats of primer were sprayed on the part to make it ready for more glossy black paint. 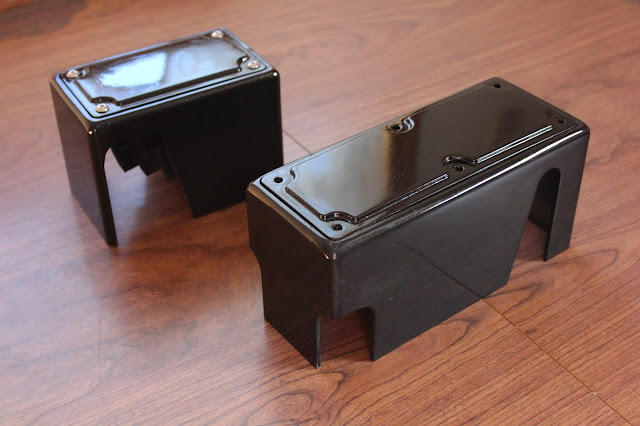 Here finally are the two housings that will be used to cover up either a portion of the brake hydraulics or all of the assembly.  The smaller housing has it's cover already mounted but I did not want to add the hardware to the larger housing when this photo was taken as I was immediately going to install it into the dune buggy and did not want to put it together and then take it apart and put it back together again. 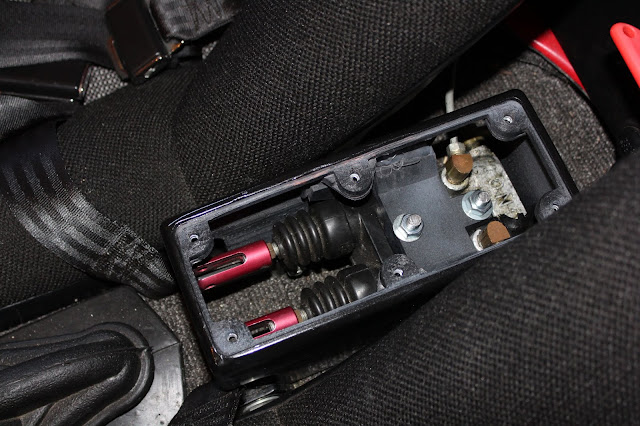 Just like the smaller housing the larger one slid into place perfectly and was bolted down using the two "T" bolts that were placed between the brake hydraulic cylinders.  It was a perfect fit. Very secure all I needed to do at this point was to tighten the nuts for the bolts and then mount the top cover plate with the six smaller bolts. 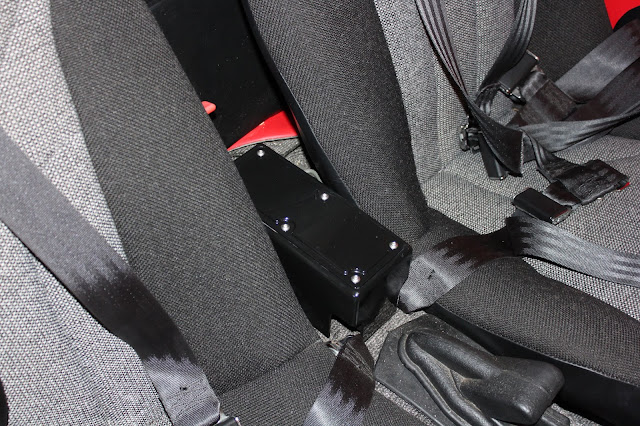 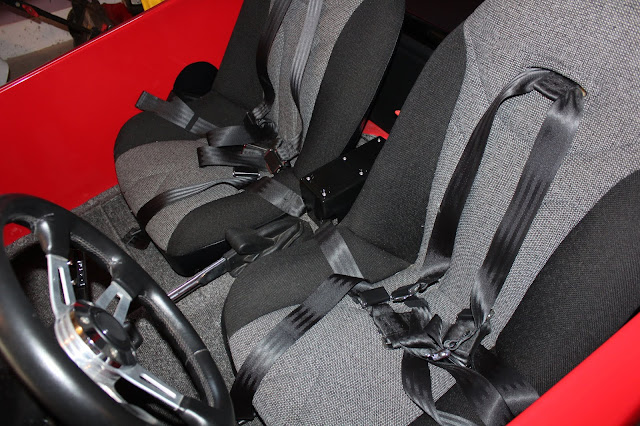 I am very happy with how the interior of the dune buggy now looks. No more brake levers that would never be used. This also makes it easier to operate the emergency brake and no ugly hydraulic brake cylinders to stick out like a sore thumb in the middle of everything else that looks like perfection.

Scratch another project off for the new dune buggy!
Posted by Dave Langkamp at 2:43 PM