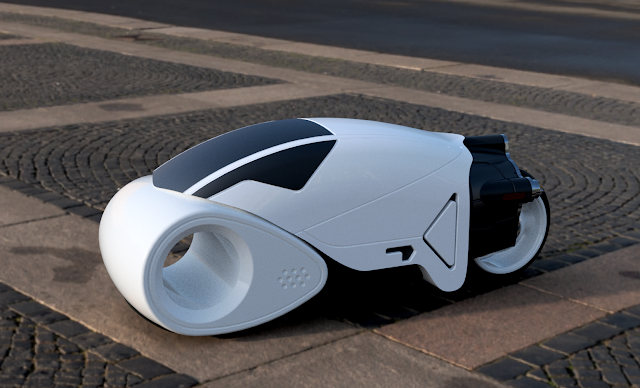 Around three years ago or so I had thought of 3D printing a model of the Tron Light Cycle.  For those of you who have never heard of this vehicle it came from a SciFi movie of course named Tron.

In the SciFi movie the main characters drove vehicles called light cycles.  All done in special effects of course and looked like enclosed motorcycles that traveled at high speed leaving behind a light streak that no one could pass through.  The good guys would chase bad guys eventually corning the bad guy in with the light streaks where he would crash and die.  That was the highlight of the movie and was about the best that the movie had to offer. The movie itself was not one of my favorites but the vehicle has always stirred an interest in me so the project was seriously looked at when I first modeled it using Fusion 360 software. 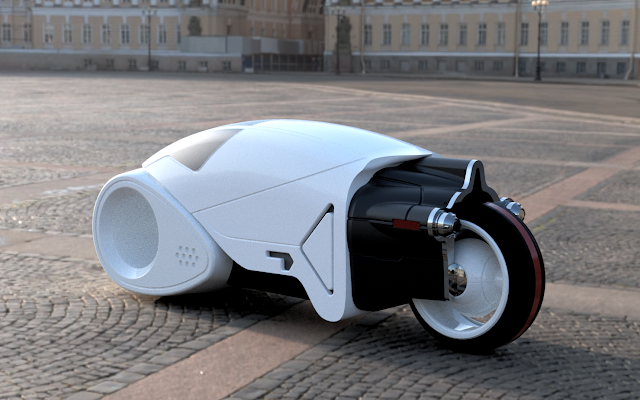 The two images that you see above are of my Fusion 360 Tron Light Cycle.  Fusion as you can obviously see makes my 3D computer model look real enough to touch in these images so it inspires me to look at making the computer model a real 3D printed model.


At the time I modeled the light cycle I did not have a 3D printer large enough to make it the size that I had in mind.  I wanted the model to be 24 inches long.  This was not possible to make with the smaller 3D printer that I had owned at the time mainly because of the mid-section of the cycle would have been impossible to make to that scale.


But now I own a much larger 3D printer capable of making much larger parts that are at least 80% as large as I want them for the light cycle.  This would make it possible to make a light cycle that would be 21.4 inches in length!  Close enough to satisfy working out the rest of the design to possibly start building a real 3D printed model of the light cycle. 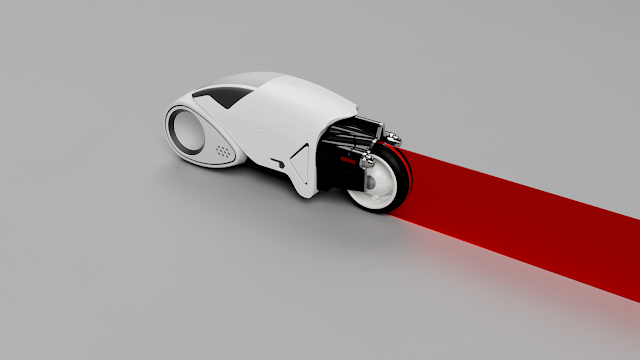 My idea for the new 3D printed model of the Tron Light Cycle is to hollow out the interior of the body of the model and install a red Plexiglass panel at the rear tire and then light it from inside of the model.  This would make the Plexiglass glow and give me a light streak effect.  A nice effect if I can get the logistics of the model worked out.  The picture above gives you a good idea of how the effect would look once the model was completed.

In the image above you can see a cut-away view of the center section of the light cycle.  After looking at my original Fusion 360 model yesterday I was able to clean up some of my original design and start working on solving some of the problems with my model.  First off having the center section be hollow.  This as you can see I did manage to work out and am happy with the fact that there is more than enough room for a power supply or batteries for lighting up the model and the light streak Plexiglass panel at the rear that I have planned.


I was also able to combine some parts for the model.  The rear black section of the model that you see pictured above originally was to be made in two halves.  I was able to combine these two pieces into one so 3D printing and assembly will be simplified.


The overall dimensions of my version of the Tron Light Cycle looks to be coming in at 21.36" long, 6.4" wide, and 8" tall.  This does not include having a Plexiglass light streak coming out of the rear of the model.  It should be pretty impressive if I can get the computer model worked out in Fusion 360.


The light cycle also will take quite some time to 3D print.  The mid-section would be 3D printed in two halves and then combined in the final assembly.  Just to 3D print one half of the mid-section will take approximately 40 hours. I still have a long way to go to figure out the total time to 3D print the model but so far it looks to be like the model will take a very long time to 3D print. But it still looks promising and since the weather outside to day is 25 degrees below zero it also looks like a good day to work on this project.  I'll let you know if I get the bugs worked out of the design before giving the go ahead with actually making this large display.  Stay tuned and stay warm.
Posted by Dave Langkamp at 8:46 AM