Press the YouTube button to see a bigger video.

Lot's of progress again today on the Solsylva CNC machine build for the QC Co-Lab makerspace in Davenport Iowa.  This video show the next step in the assembly as I put together part of the gantry for the "Y" axis of  the David Steele Solsylva CNC machine. A good start to another great project.
Posted by Dave Langkamp at 6:43 PM No comments: Links to this post


After spending the last couple of days gathering emails, drawings, notes, tools, parts and my video camera I started building another Solsylva CNC machine.  The video posted here will hopefully be one of the first of many videos that will step you through the process of putting one of these wonderful machines together designed by David Steele.
A lot of what is on this blog already is because of this machine.  Check out the video and follow along in the coming weeks and hopefully I will give you a good idea of how to put one of these together for your shop.  I will not give you all the particulars concerning this design as you will have to buy a set of plans from David Steele from his website. http://solsylva.com/   It will be the best money you ever spent for a tool that you will love to build and make things with.  I'm a big fan for sure.
Posted by Dave Langkamp at 9:19 PM No comments: Links to this post 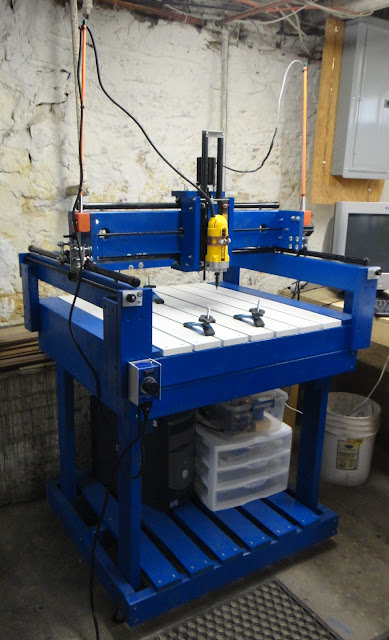 This past Saturday I was once again in Davenport Iowa for a group meeting at the QC Co-Lab maker space. As usual I enjoy rubbing elbows with the guys  and ladies at the Co-Lab and compare notes, projects, and ideas that everyone has.  It has been finally decided to start the build of another Solsylva CNC machine for the Co-Lab and I am to be the driving force behind this project. This is all well and good as having built the same machine for The Tinker's Workshop I am considered the expert in our little group at the Co-Lab.
I spent all day today going over old emails and notes to figure out where I ordered all the intricate obscure miscellaneous parts that will go into the machine that you can't buy at your local hardware store.  Luckily so far this has been the least of my worries about this project.  I will build the more intricate parts of the machine in my little workshop and then haul them down to Davenport to do the final build.  The guys at the Co-Lab will do the major construction, painting and electronics.  With my guidance of course.  Then we'll get it up and running, dial it in, and start making more interesting stuff at the Co-Lab.
My plan is to document the build here on my blog to give you a good idea as to what it will take to put this wonderful machine together. I have a lot of photos of my first build and so as I progress with this build I will lay out what needs to be done step by step.  I do not plan on giving away the plans or the detailed information that is in them as I did not design this CNC machine and do not have the right to give this information out freely.  It was the ingenious work of a gentleman by the name of David Steele.  I do not wish to take away anything from Mr. Steele so you will have to check out his website for information on how to get your own set of plans for his design.  http://solsylva.com/
I think with the information I plan on passing along to you in the coming weeks will better show you what it takes to put his wonderful machine together.  After having already built this design once before I can tell you that it will take some work but it is far from difficult.   I give a gold star to David Steele for the information that he lays out in his plans that makes it all doable by anyone that is just a little bit mechanically inclined.  I also can give everyone some ideas that I have come up with to make his design a little easier to build and use.  If you like my ideas then go ahead and use them.  If not build the machine the way David Steele designed it.  That's up to you. No biggie.
So check back here over the coming weeks and you'll see the process that I will lay out for you to build your own Solsylva CNC machine.
Posted by Dave Langkamp at 7:55 PM 1 comment: Links to this post

A Wide Load Ready For Area 51

After six months of work I spent this past week making a big push to finally complete my Makerbot Semi tractor and trailer assembly.  Last Friday I printed parts for eight hours to make the cradle for the UFO and all of the tires for the Lowboy trailer. Today I spent an additional six hours to print the rims and hubs for these tires. Here is the end result.

This last photo gives you a good idea of the scale of this model.  It's big to say the least.  That's a five dollar bill laying next to the model. The model from bumper to bumper is 30.5 inches long.  The tractor is 7 inches tall and is 4.25 inches wide.  The scale for the model is exactly 1/24th scale. The UFO also made on a Makerbot 3D printer is ten inches in diameter and has been coated with fiberglass resin, then sanded and sanded and sanded some more to make it smoooooth and painted silver. (See earlier posts on how this was built.)  The complete model took over six months to design, print, and assemble. It would have taken less time if I had my own Makerbot as I have to travel 70 miles just to use one at the QC Co-Lab maker space in Davenport Iowa.   The complete model has close to 500 parts in it and took almost 90 hours to print. This does not include the time it took to print out the parts for the UFO which has 133 parts in it.
This has been a great project to design and build.  It could also have different trailers made for the model.  It could have a regular flat bed, a tanker, or a cargo box trailer.  Or even a car carrier.  This would be great as a lot of different cars could be made on the Makerbot to be displayed along with the carrier.  Probably would be another six months at least to do the eight or so cars that would be on the carrier.  Something to think about for future projects. 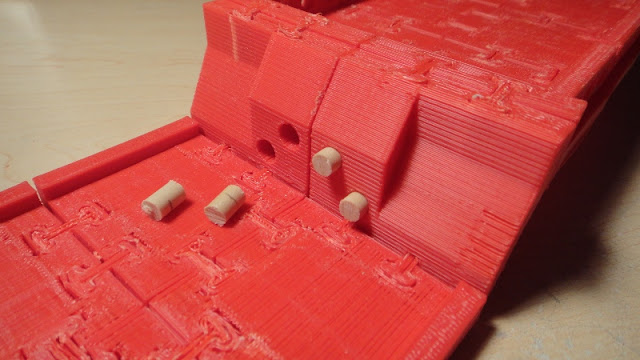 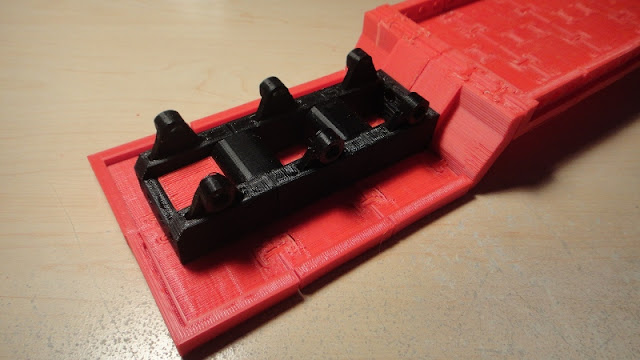 In these two photos you can see the detail that was put into the assembly of the Lowboy trailer to make it align properly and be strong at the same time.  1/4 inch wooden dowel pins were cut and inserted into alignment holes for the rear chassis. 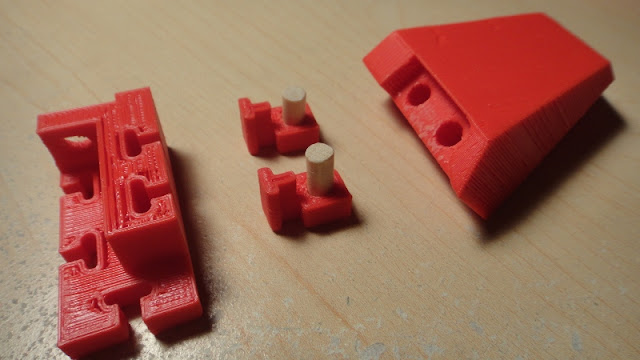 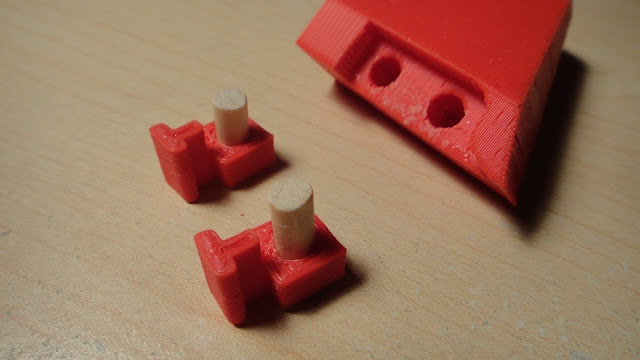 These photos show some of the intricate locking parts that make up the Lowboy trailer.  Again all of the components are tied together using 1/4 inch dowel pins that were cut and sanded to fit into mating holes.  All of these components were epoxied together to add additional strength to the assembly. 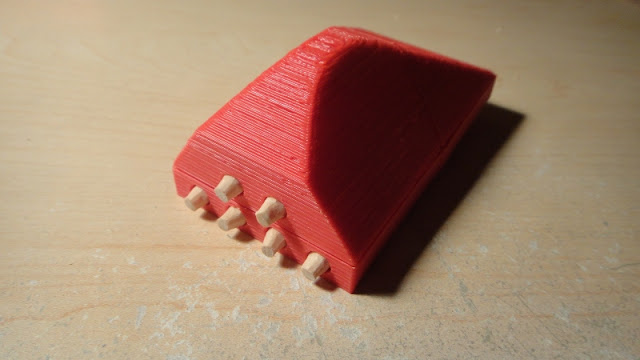 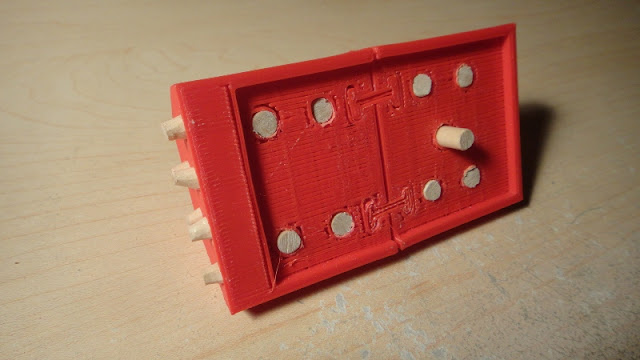 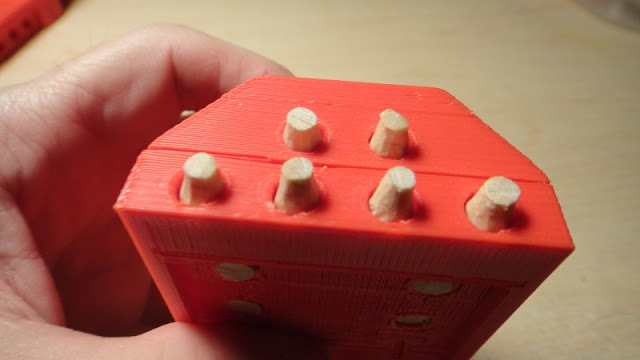 These three photos show all the work that went into the front of the Lowboy trailer that make up the hitch.  Lots and lots of dowel pins had to be hand cut and fitted then as before epoxied to the rest of the trailer for strength. Time well spent as the trailer now is quite strong and more then able to hold up the weight of the UFO sitting on it. 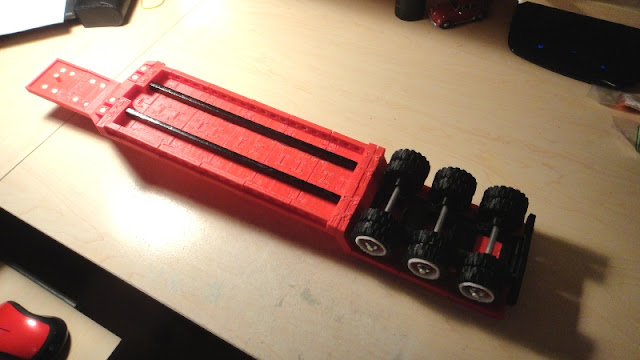 Additional wooden bracing was added to the underside of the low section of the Lowboy trailer.  I painted the wood gloss black to make it stand out and then epoxied this in to position.  This stiffened up the trailer a great deal and it still looks good underneath.
Posted by Dave Langkamp at 9:00 PM No comments: