As I get older I find some things in my life just a little more than irritating. Not with life in general but with the fact that I am getting older and my body is not as young as it used to be.  I will be celebrating my 61st birthday in a couple of days and with my advancing years comes things like aching legs from to many hours in my workshop, to my eye sight that I will have to correct once again with a new pair of bifocals. So the project that I completed today will help me eliminate an eye problem that I have been putting up with for some time now.  With having to wear bifocal glasses it becomes a problem at least for me when I try to read something at the top of the screen on my computer monitor.  See the photo below. 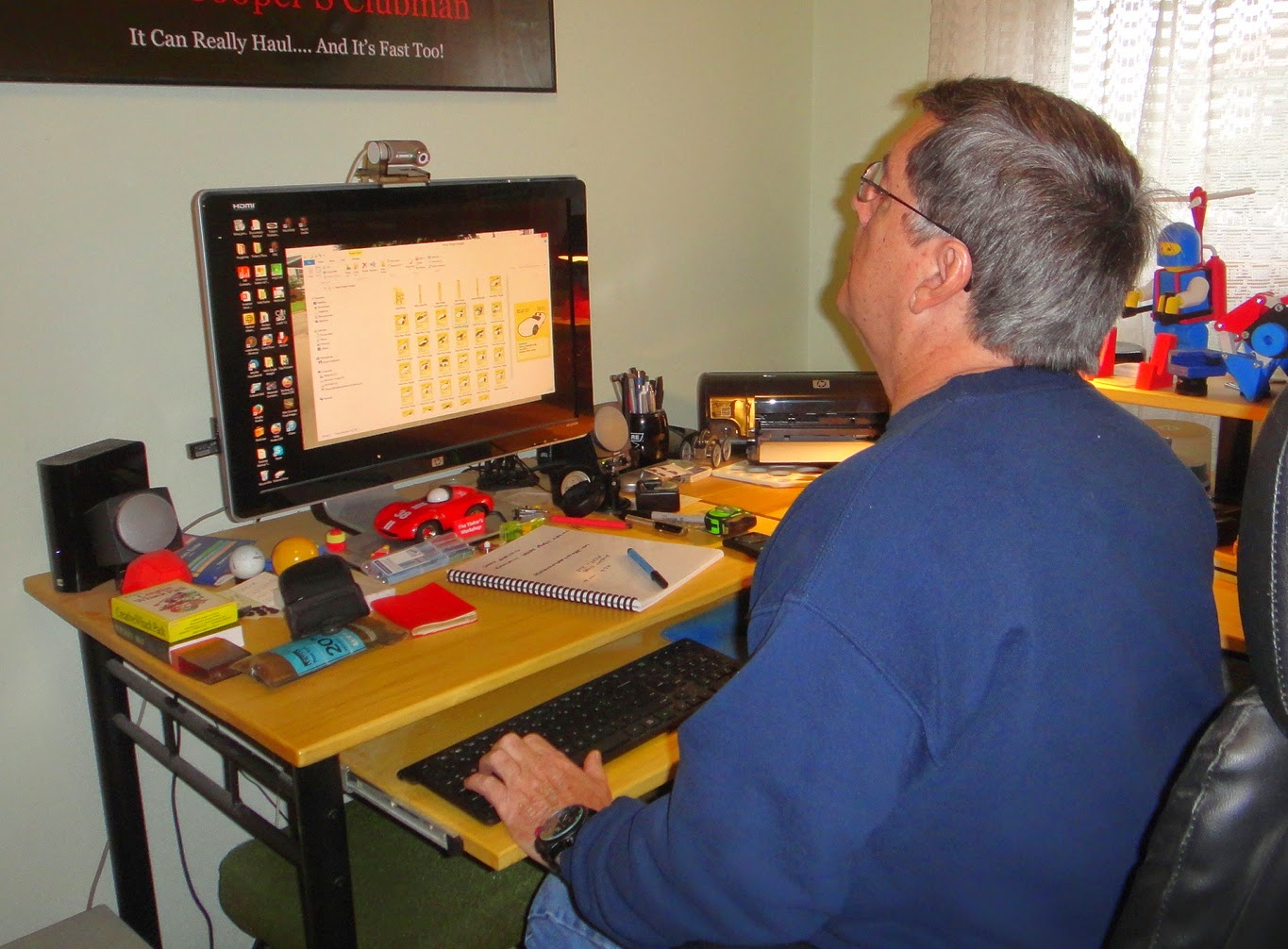 Here I am as usual having to crane my neck to see the top of my computer screen clearly while wearing my bifocal lens glasses.  Sure I could raise my chair so I would look more straight ahead but then I am so high up it makes it difficult to type anything on the keyboard. 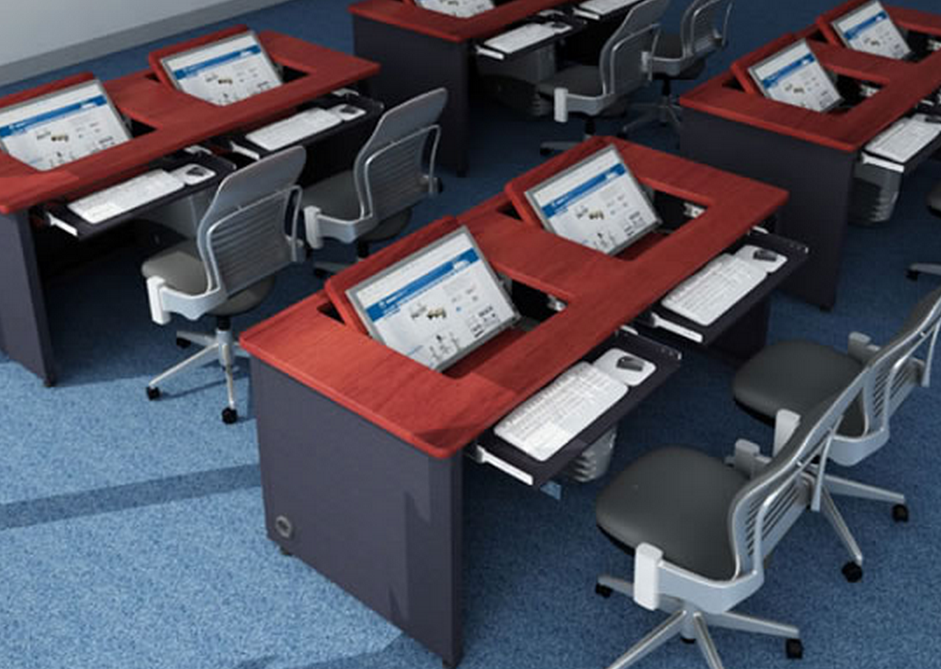 After doing some research online I came across something that I thought would work for my problem.  These computer desks are set up so that the teacher and the students can see one another over top of thier computer monitors which are recessed into the desks.  Anyone using this type of desk has to look down to view the monitor.  Perfect for what I need! 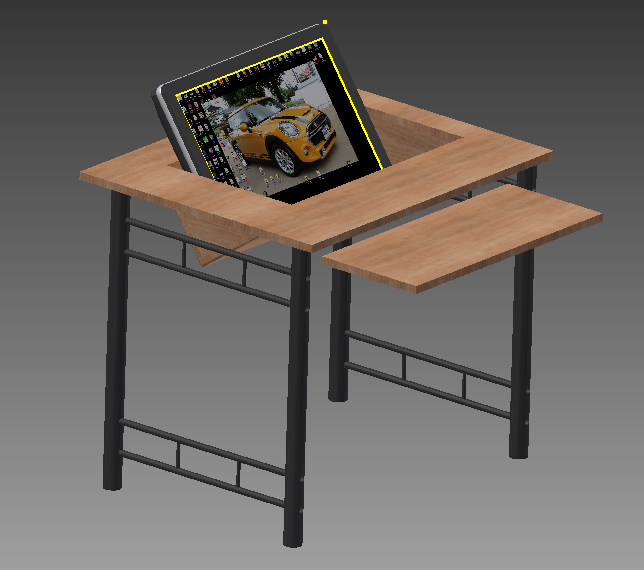 I immediately went to work using my CAD software on my new modifications that I wanted for my desk.  I could not modify my original desk top as it would have been more difficult to complete than starting from scratch.  So I would make what you see in the image above.  The monitor after having removed the stand it is normally mounted on would rest in a cavity built into the desk top and still be able to use the original platform for the keyboard and mouse. The trick was making the cavity fit in between the rails for the sliding keyboard platform. 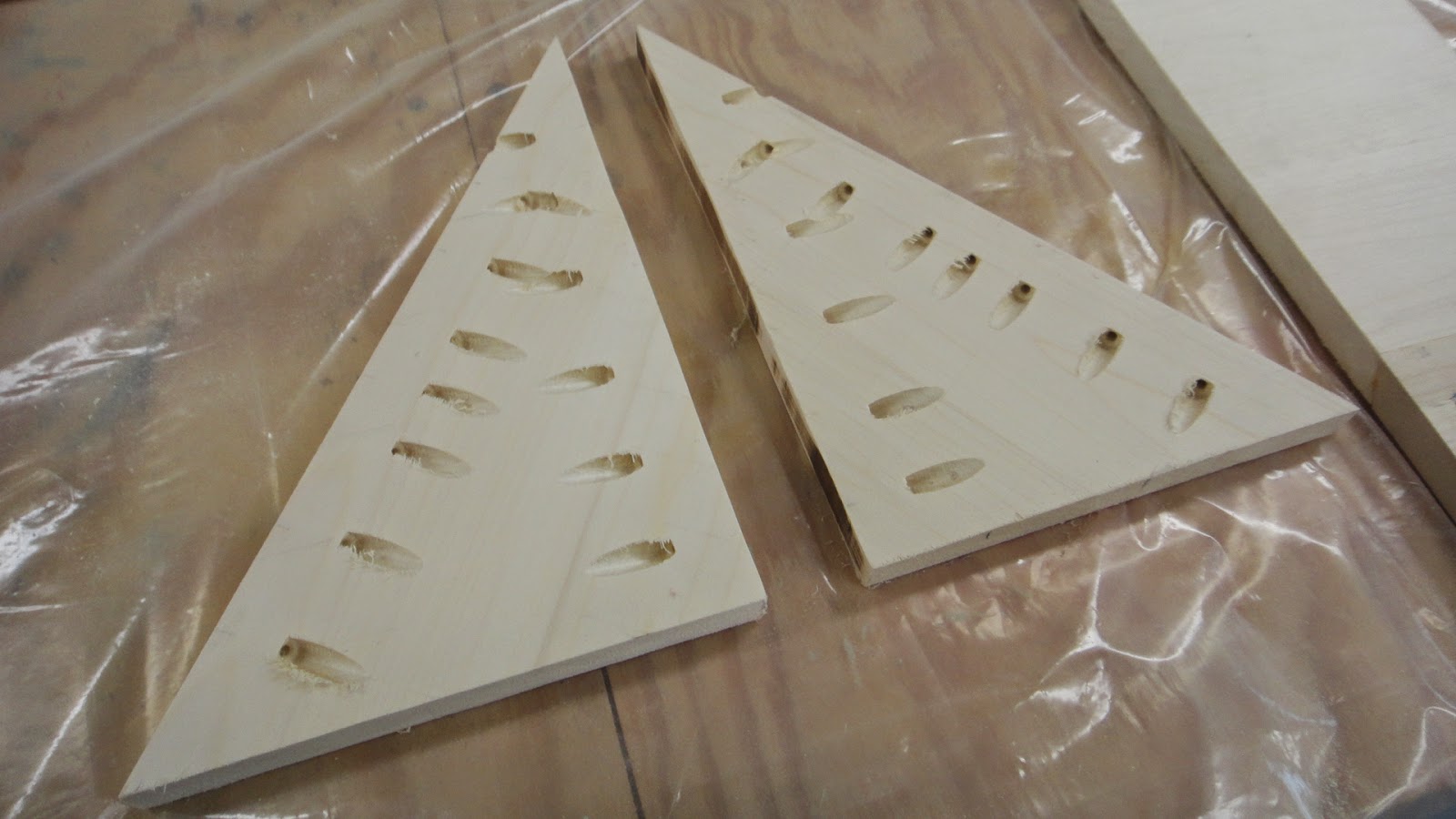 I started with the triangle pieces for the desk cavity as I thought they would be the toughest to make.  I was luckily wrong in assuming this as in no time at all I had what I needed for the project. I put more than enough pocket holes in these parts but I thought it best for a little overkill to rule out any chance of structural failure.  Not a good thing to see you computer monitor come falling through your desk. 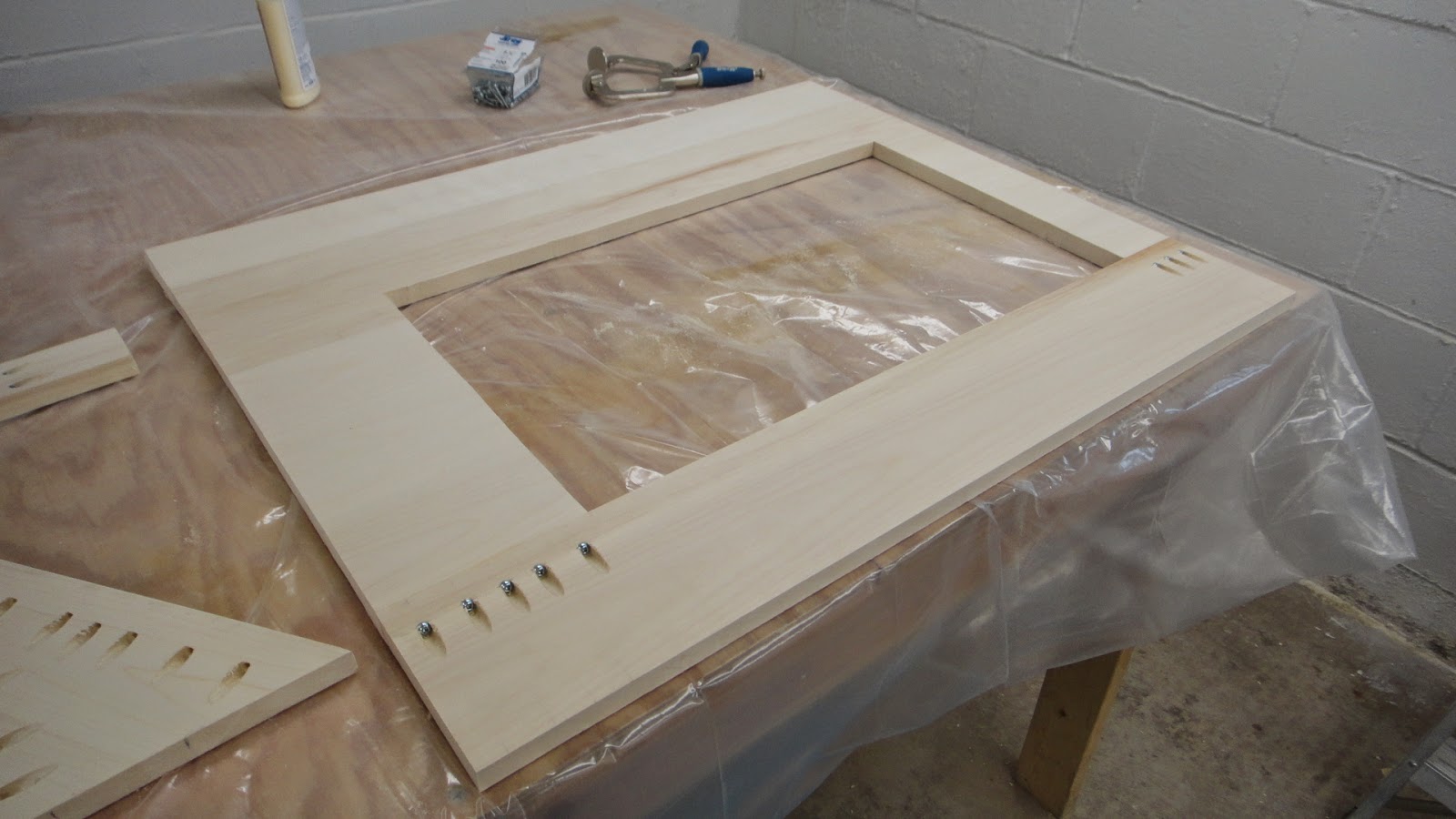 Here the desktop is assembled.  I cut a large section of the aspen wood panel and then attached another piece to it to make the opening for the desktop cavity.  Notice how the opening is not centered. This had to be this way to mount correctly into my "L" shaped computer desk and allow the platform for the keyboard and mouse to work correctly. 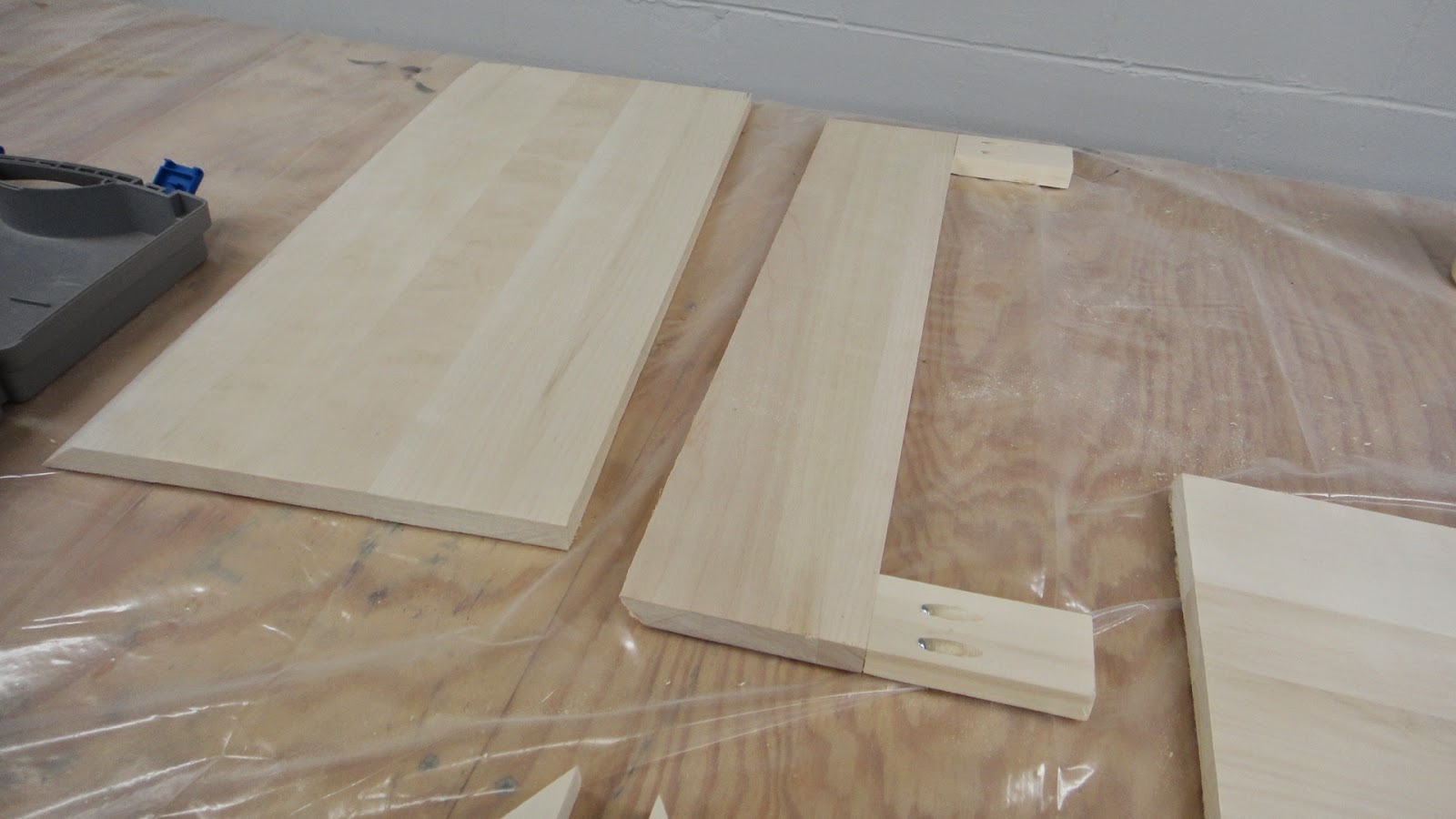 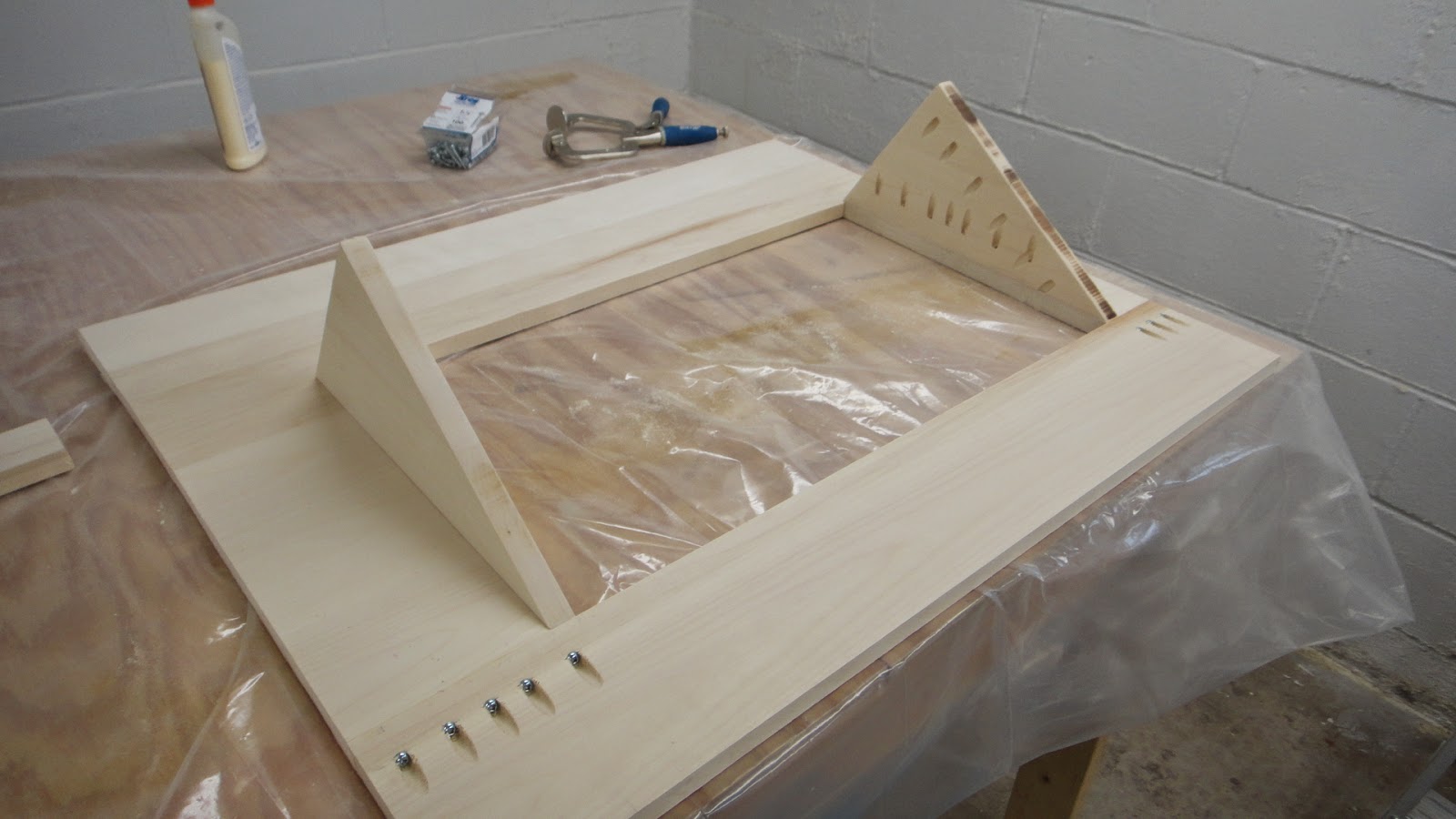 Here the triangle pieces for the cavity are being lined up for assemlby to the face down desktop. 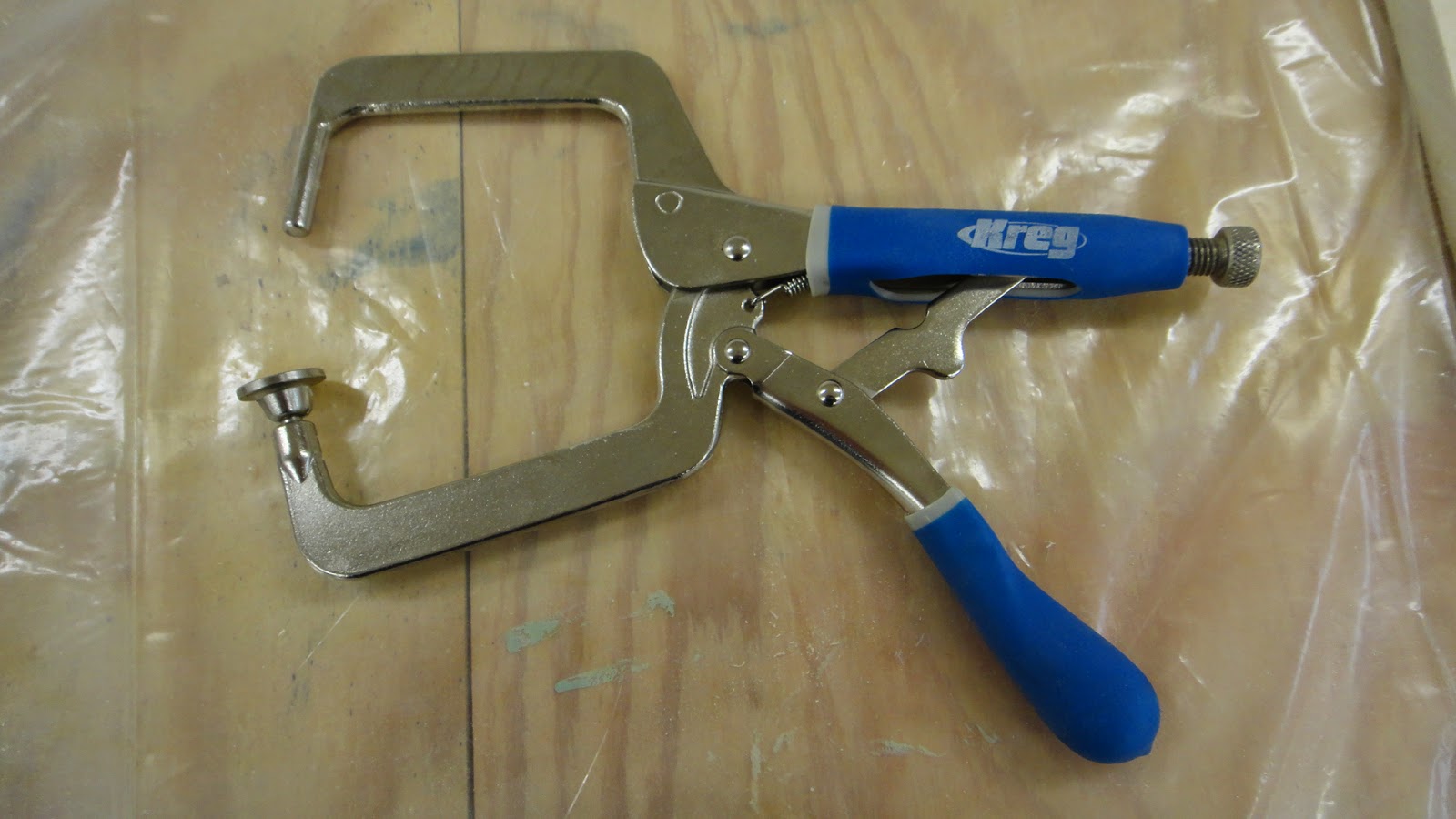 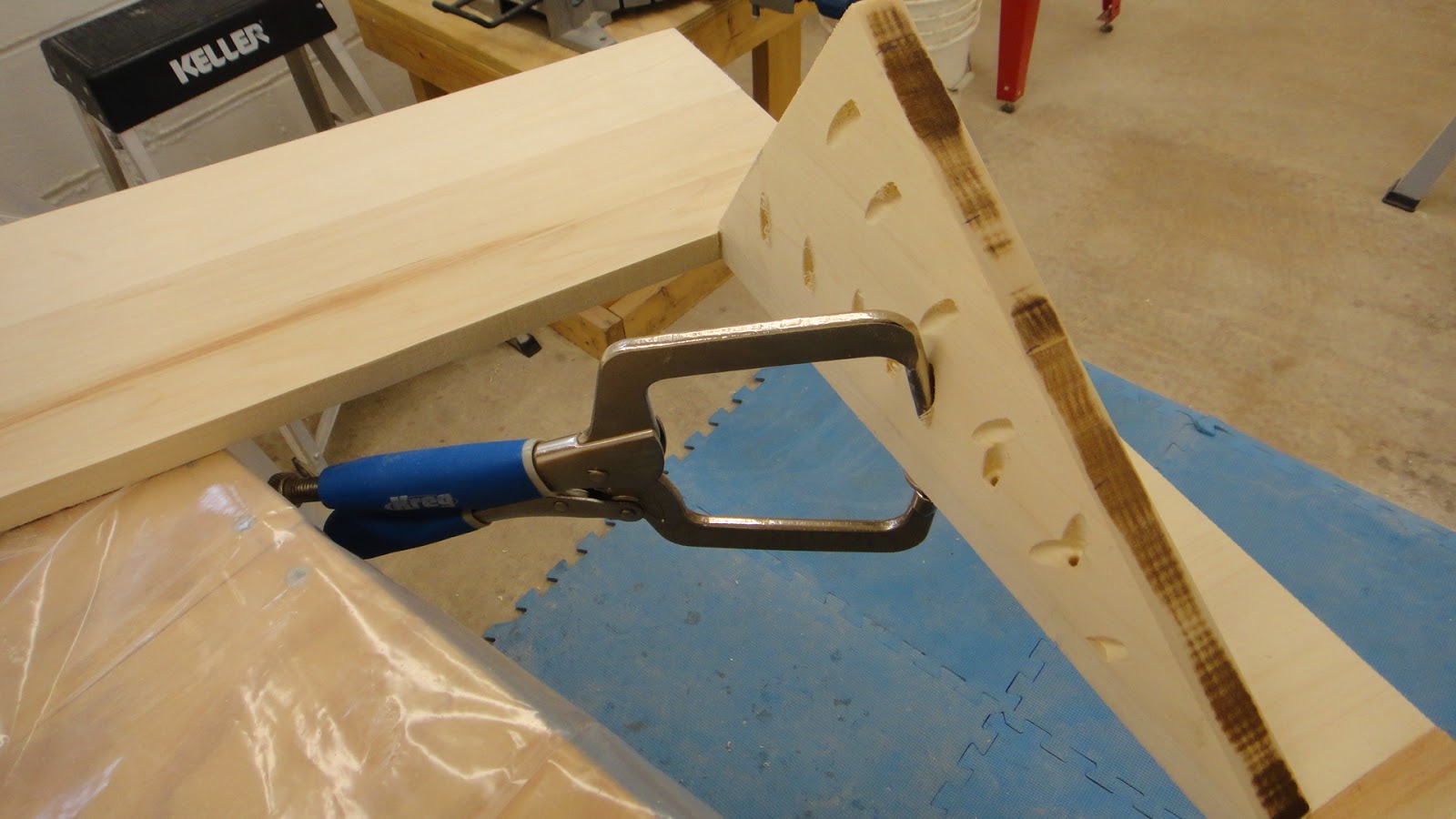 A special clamp from the Kreg company is used to hold the triangle pieces in place until the mounting screws can be installed.  Kreg makes the jig that makes putting in pocket holes a simple task and is a great tool for this type of project. 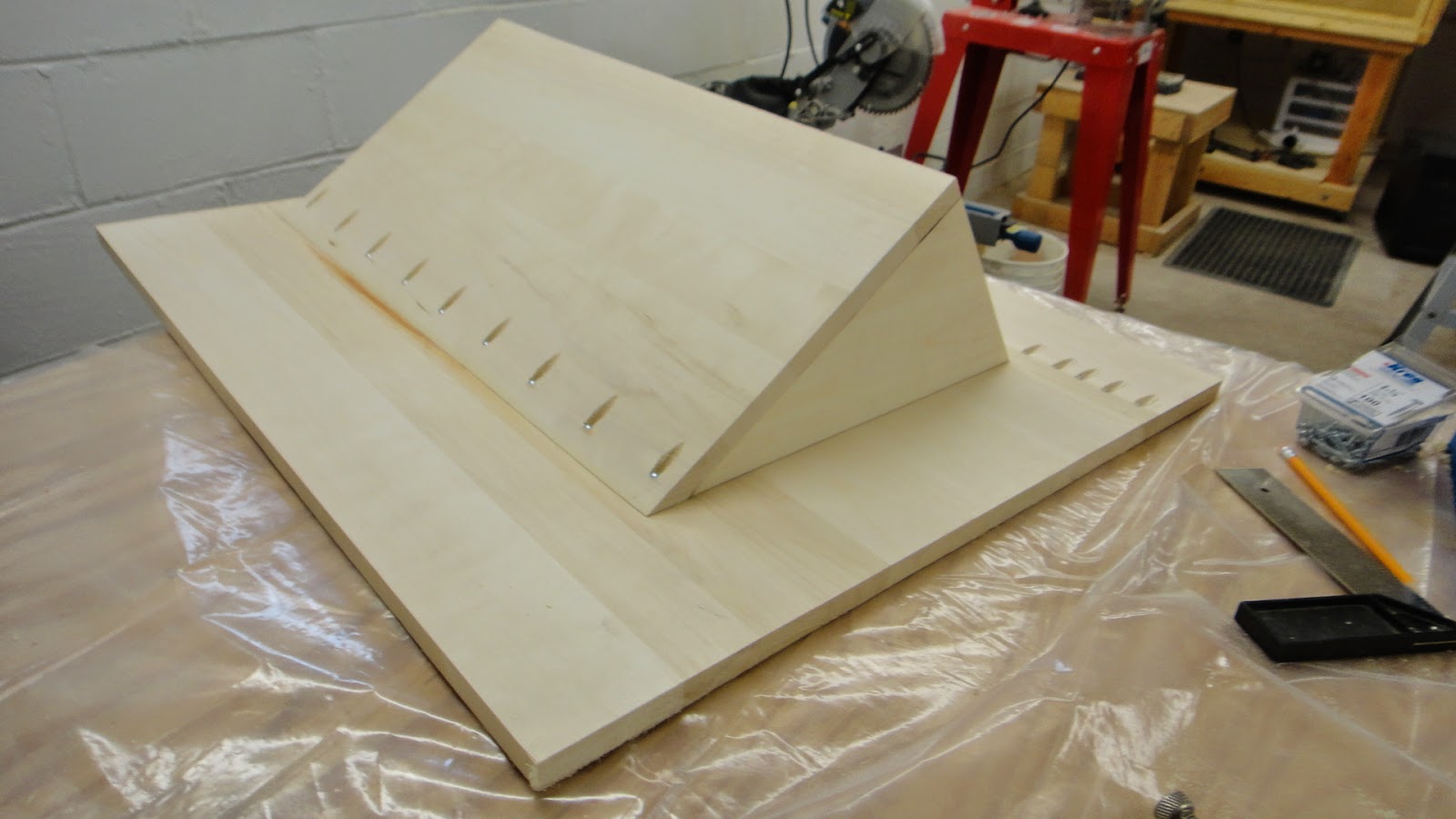 Next the base board is attached to the assembly using wood glue, screws and pocket holes.  At this point in the project I am more than happy that everything is lining up nice and straight.  With the pocket holes on the inside of the cavity the outside of the desktop looks really good.  The pocket holes in the rear will not be seen once the assembly is installed back into the desk. 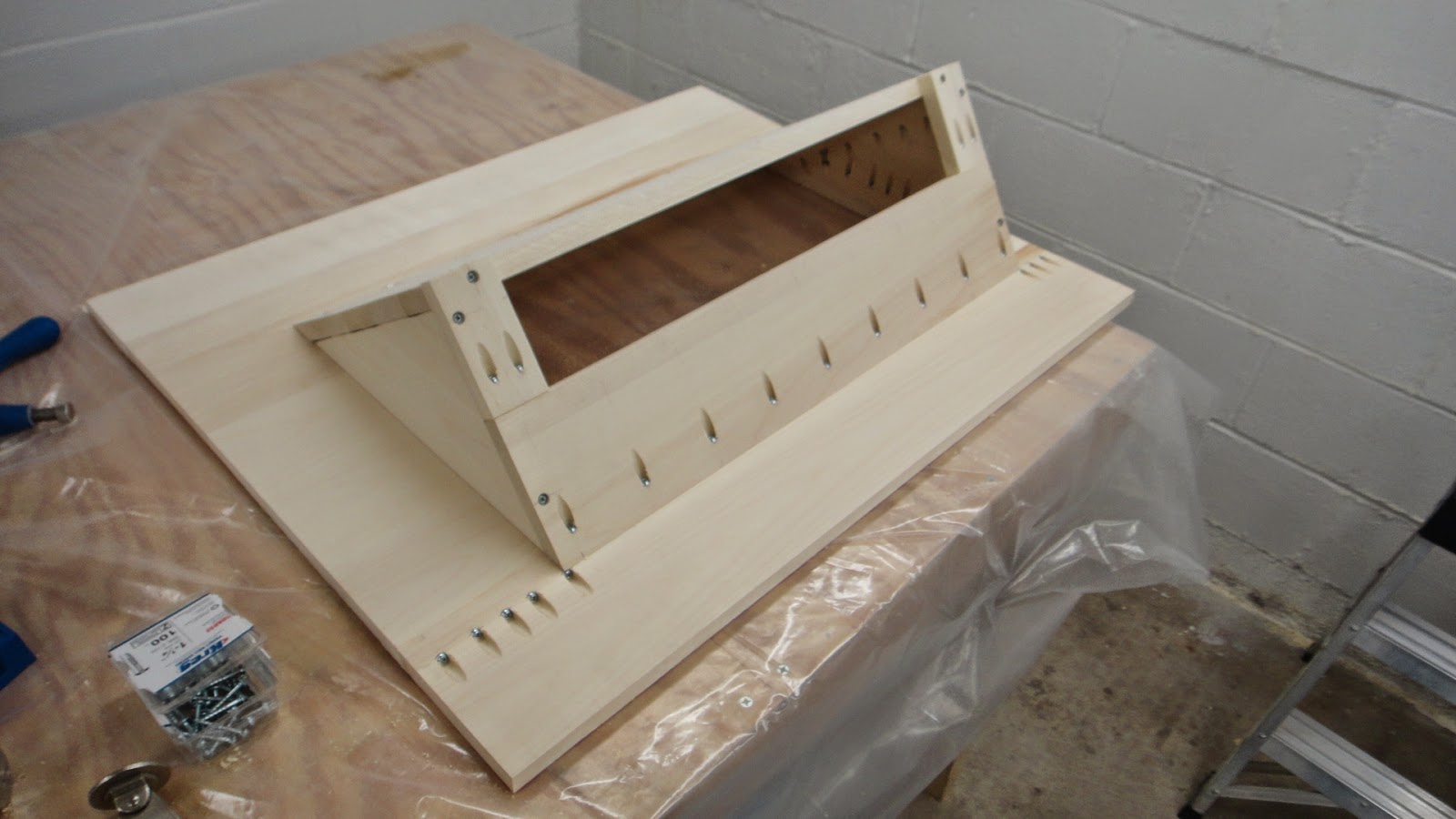 The last piece to be assembled is the back board for the desktop cavity.  This is glued and screwed into place like the other parts already assembled.  This cavity needed to have this opening in the bottom rear of the assembly to allow for the cables to run the monitor to be hooked up.  I was glad that I made such a nice large opening for this task.  Makes things a lot simpler to assemble as well as use. 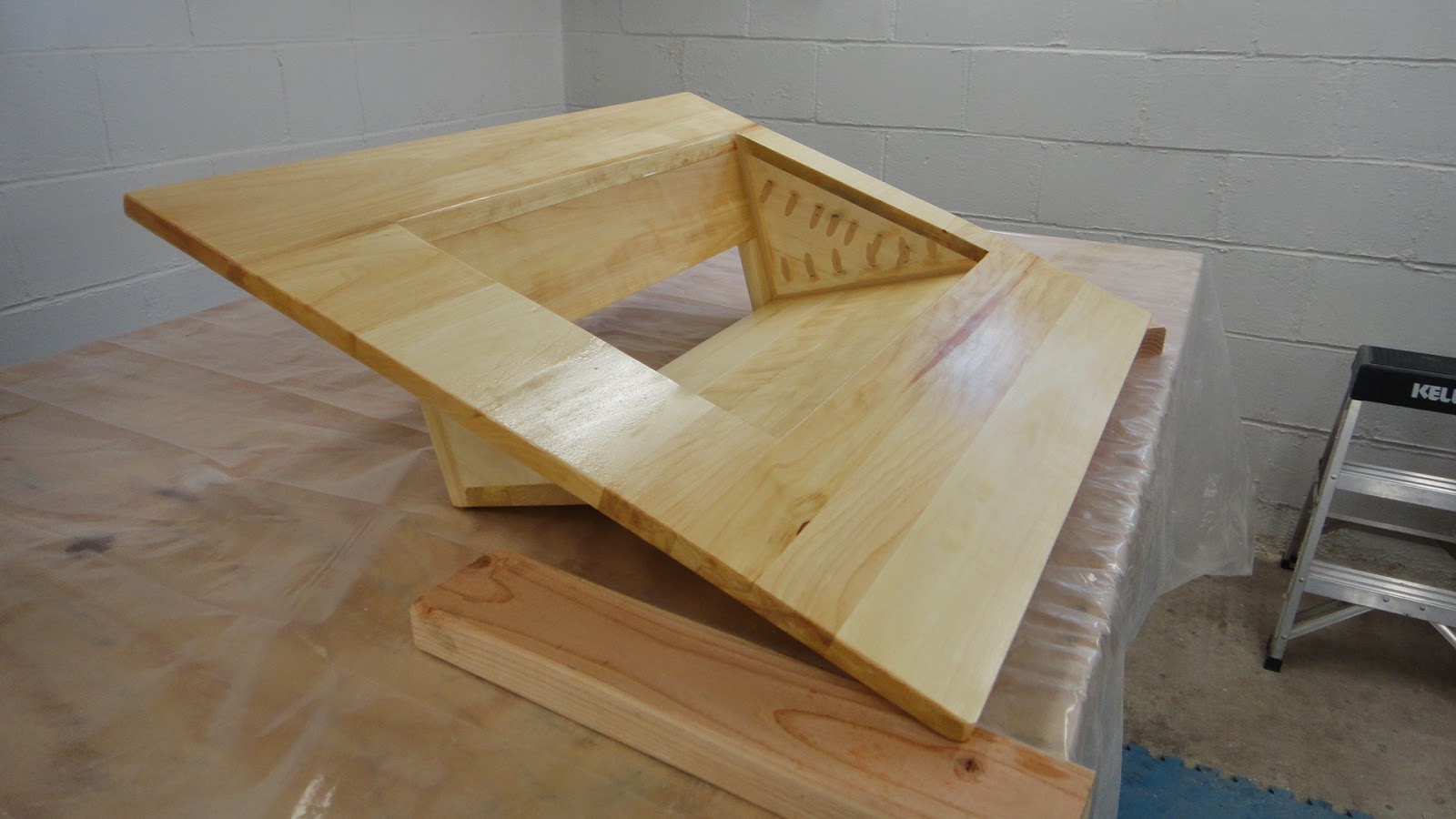 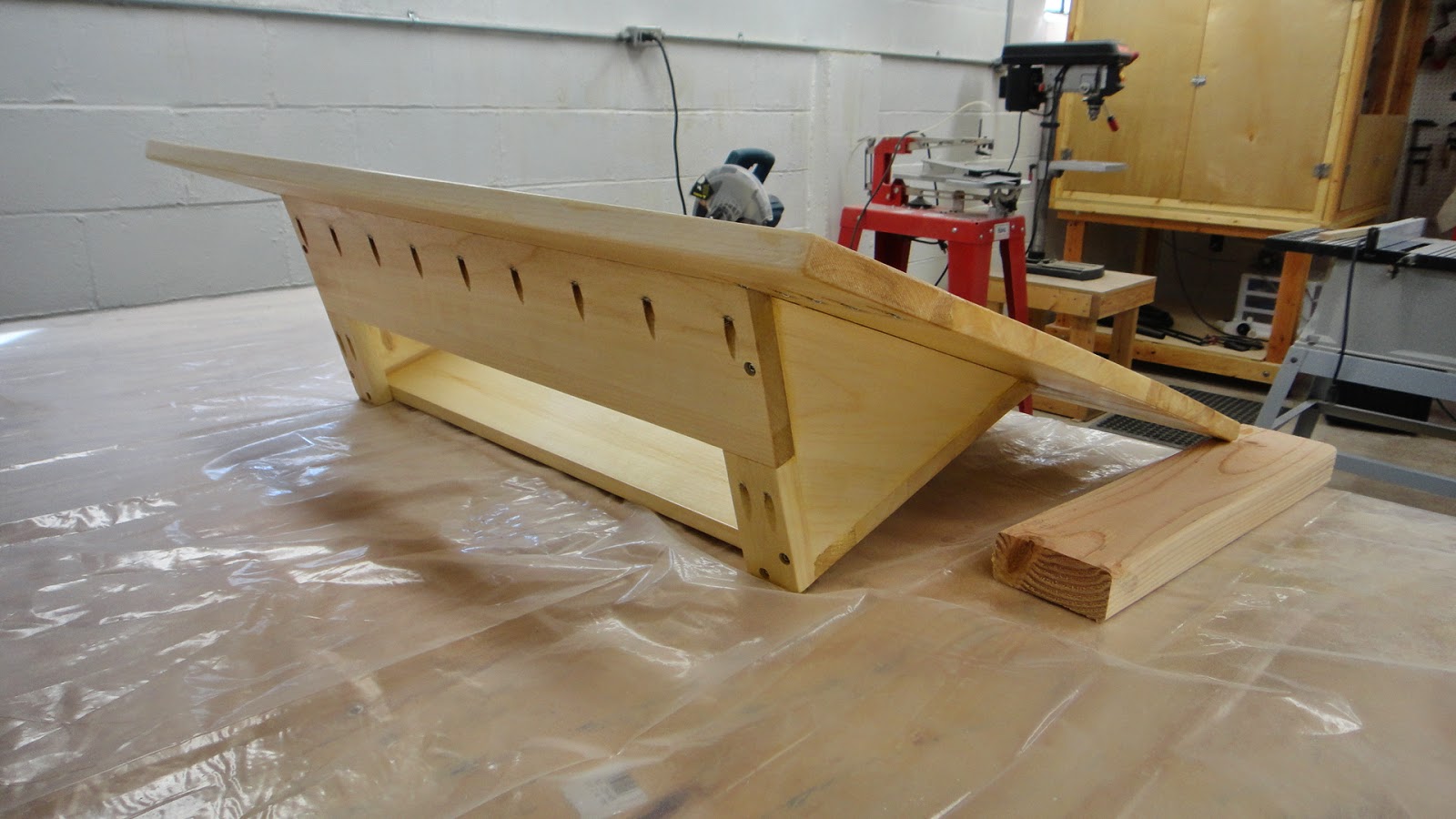 The next step in the assemble was to varnish the desktop with three coats of polyeurathane.  This was a simple task and only took a couple of days to get a nice clean smooth finish. 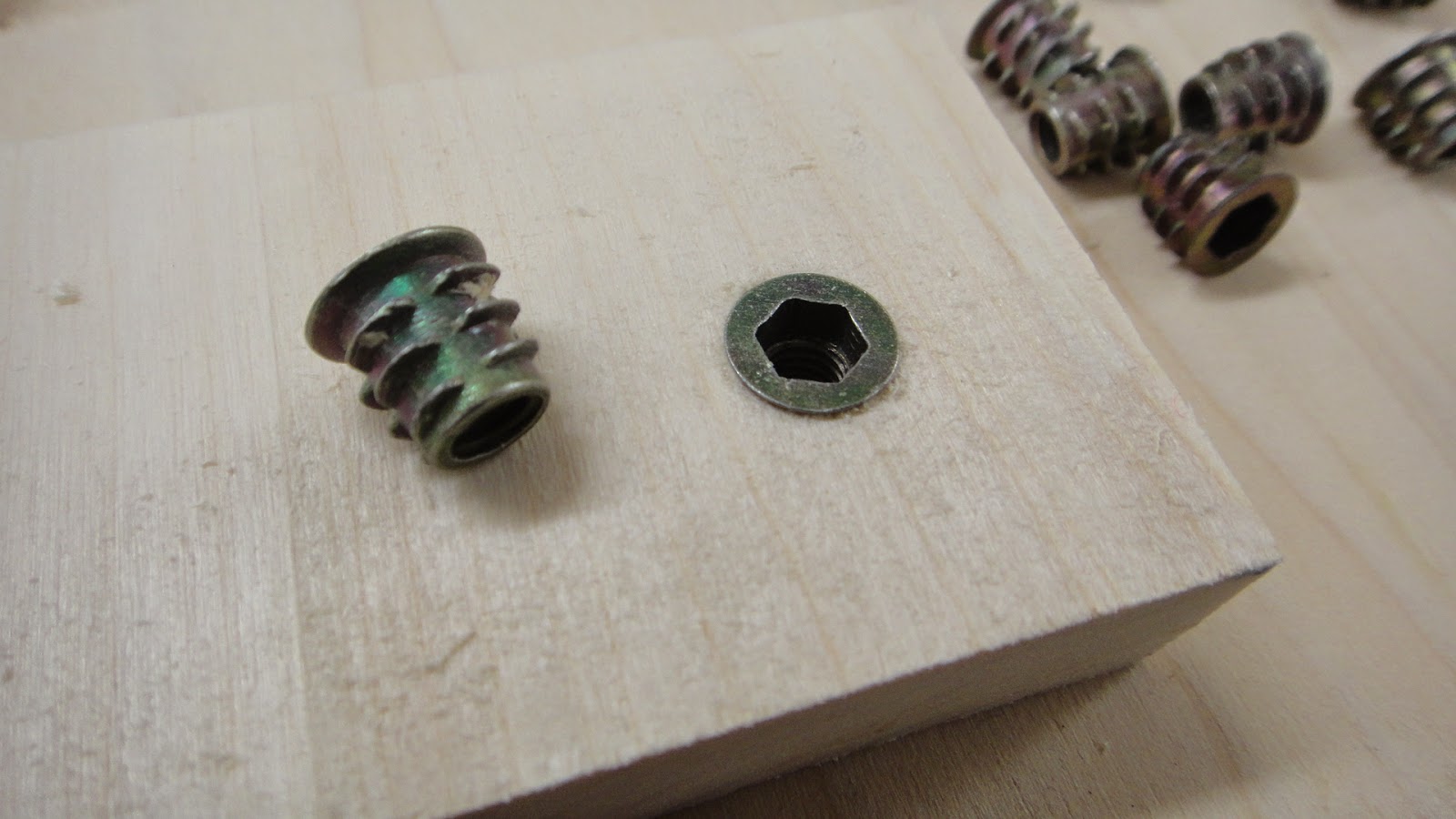 To mount the desktop to the legs of the table I needed to install the threaded inserts that were in the original table top.  I removed these inserts and then used a 5/16 drill to make the holes needed for the installation of them into the new desktop. 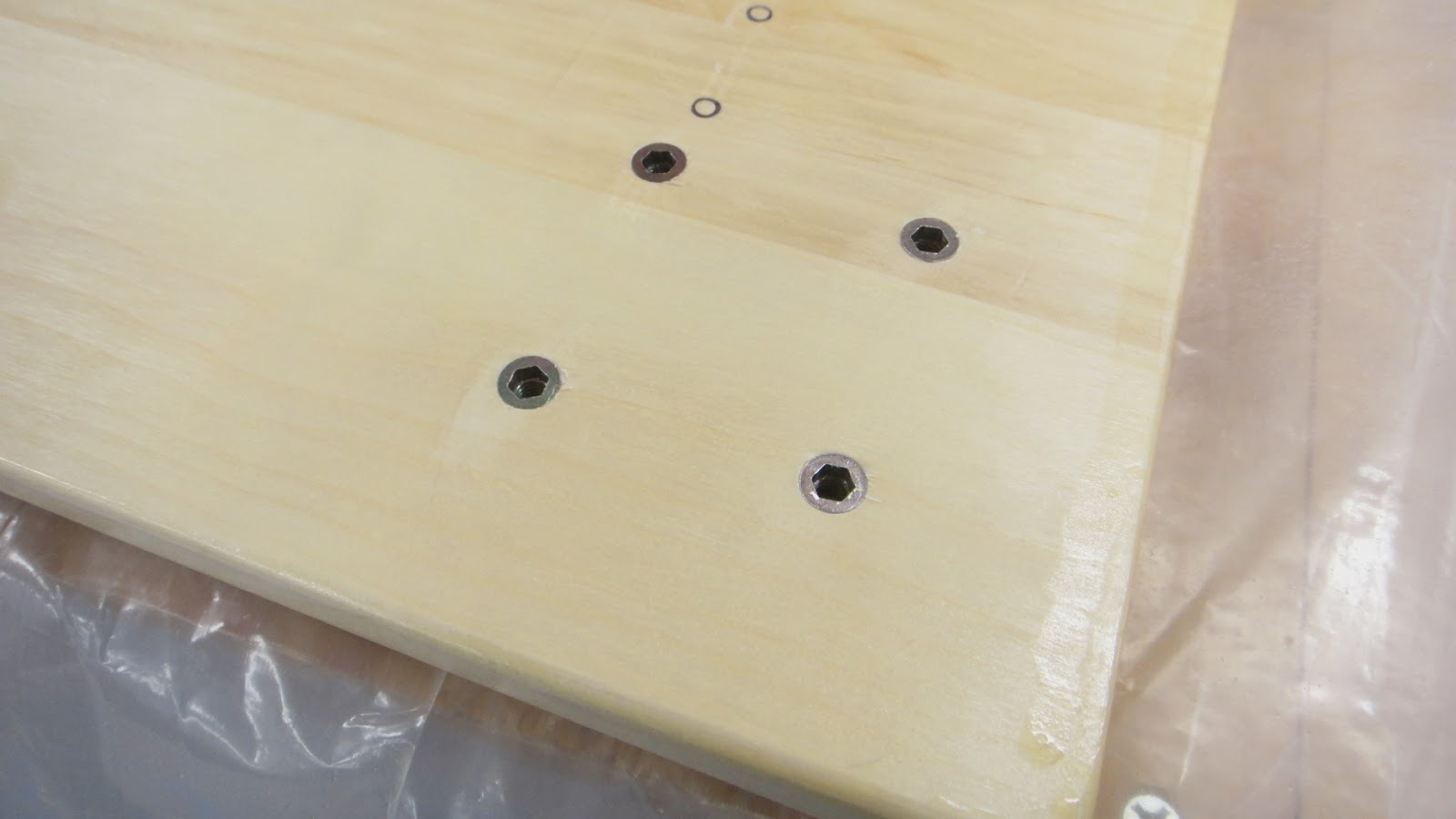 I placed the assembled desktop onto the leg assembly of the desk and then marked where I needed to drill for the threaded inserts.  The trick here was not so much marking the holes but drilling them.  The assembly at this point is kind of large and awkward to handle while trying to drill holes using my drill press.  I took my time and as you can see the installation of the threaded mounts turned out perfect. 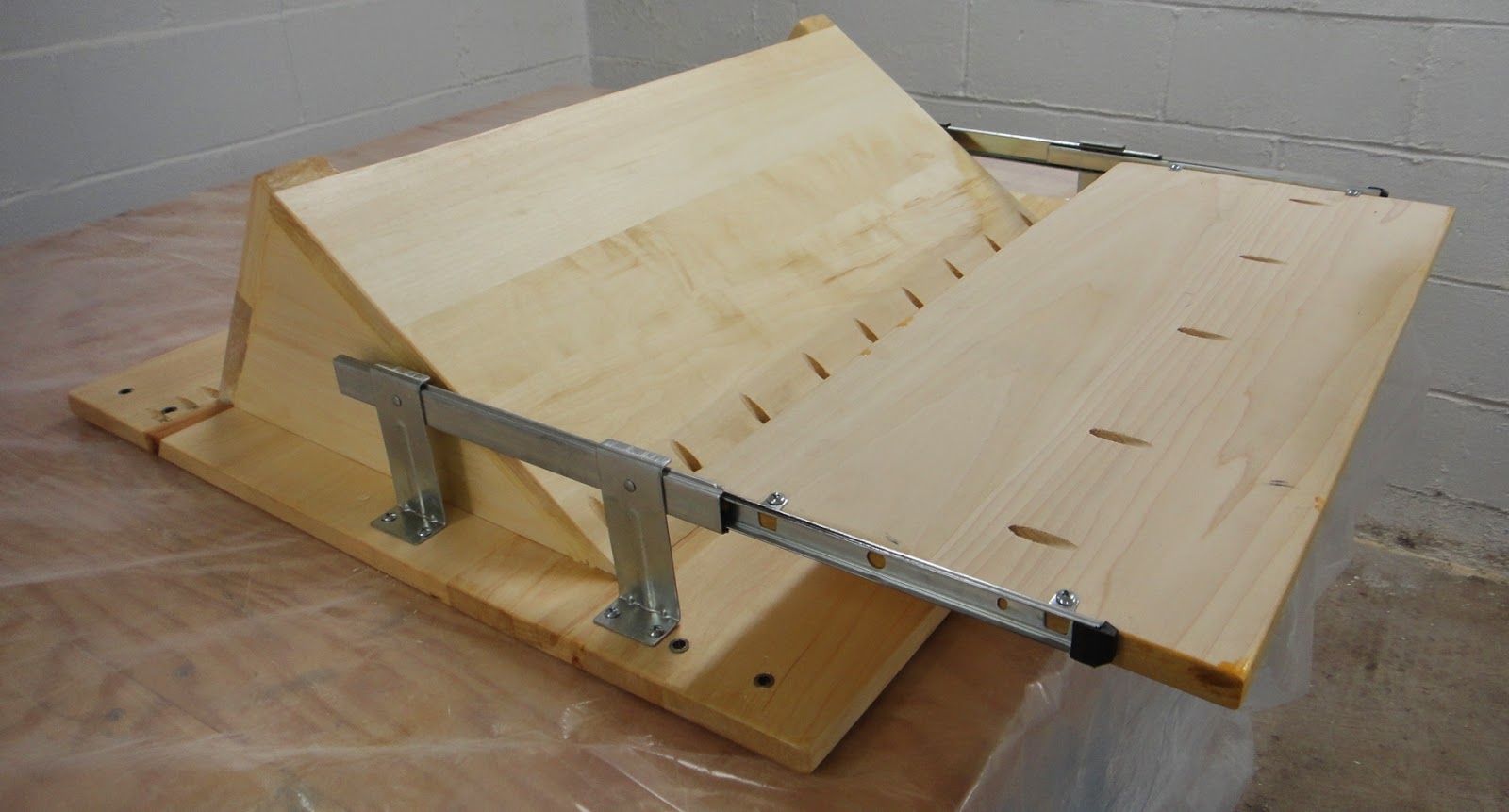 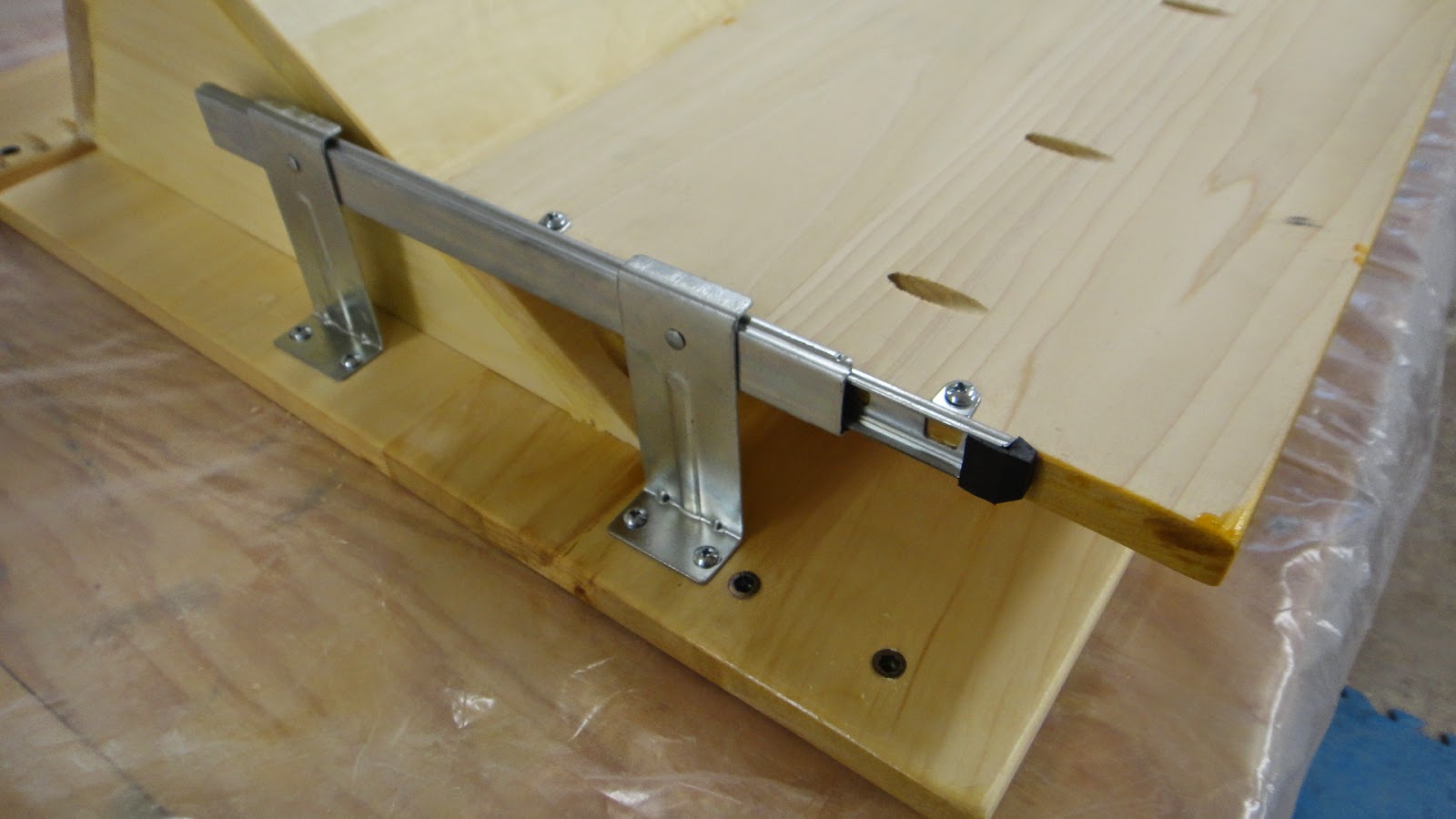 I also marked the mounting holes for the platform for the keyboard and mouse while I had the desk upside down.  It was then just a simple matter of screwing this assembly to the underside of the desktop.  The clearance for this assembly and the desktop cavity was close but not impossible to make work. Not a hassle to get put in correctly. 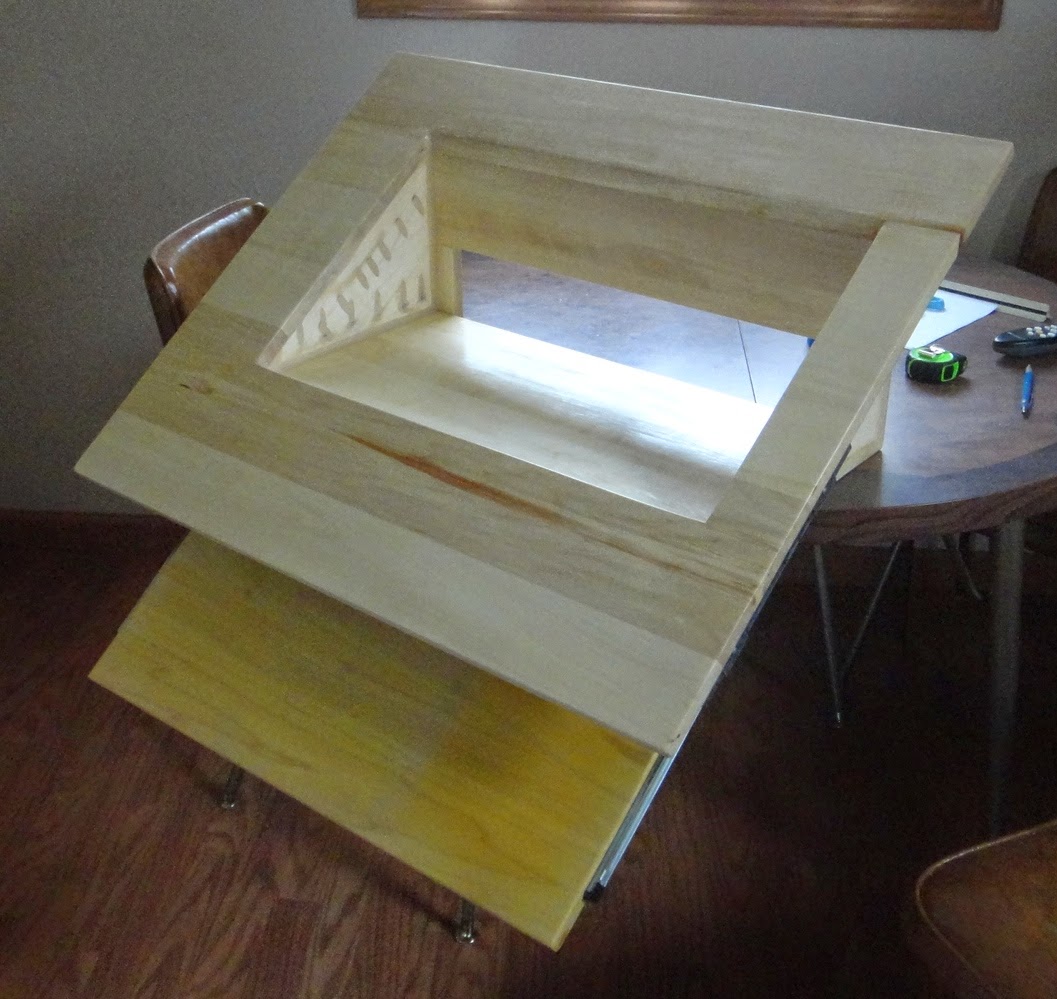 Here the new desktop is resting on my kitchen table.  The desktop measures 27 x 33 inches and is nice an solid. 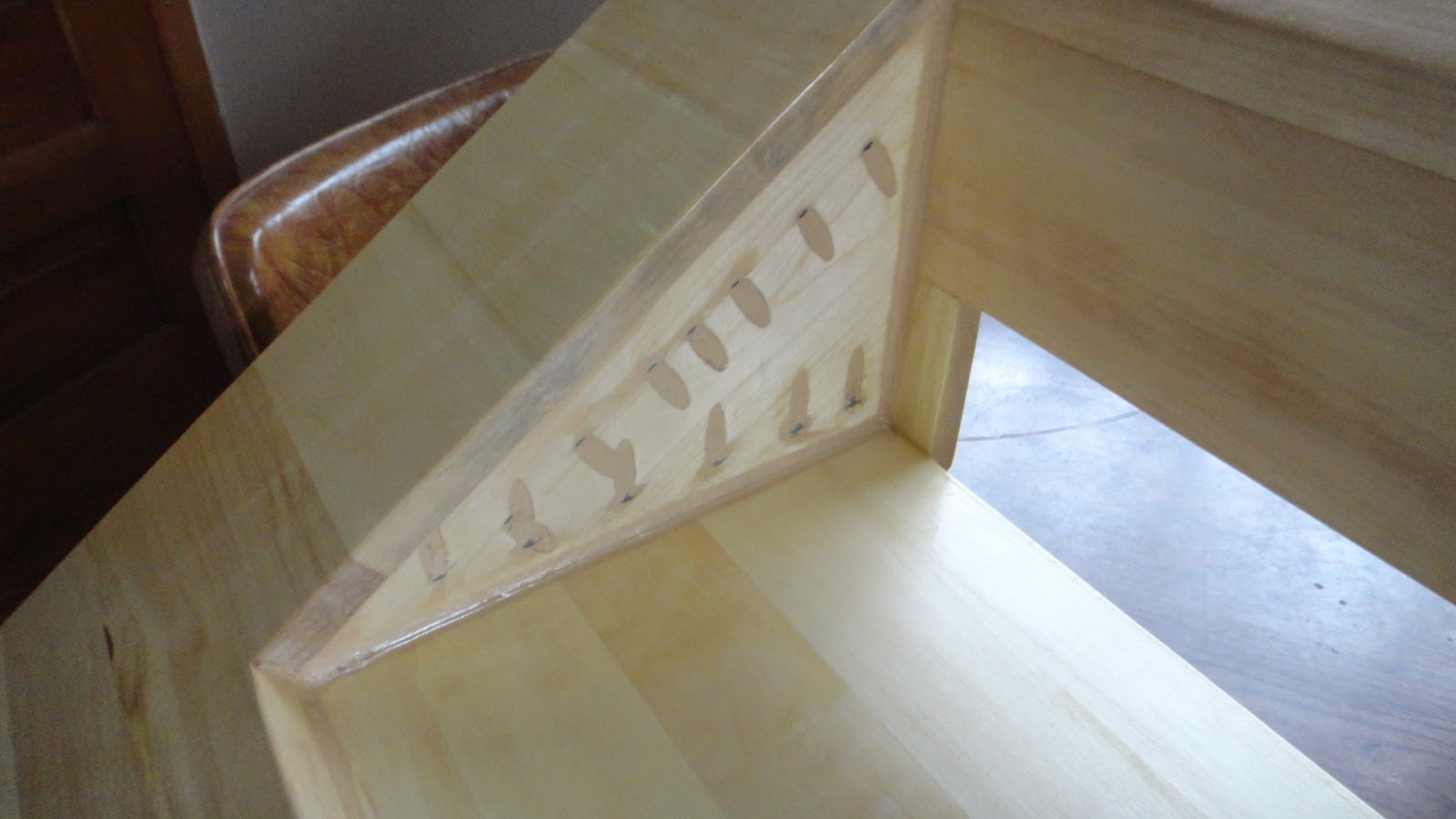 I had filled the pocket holes on the triangle cavity pieces with wood putty before I did the varnishing just to see it it would look ok.  That is the word for it.... it's just ok.  So I went with plan "B" for this portion of the build. 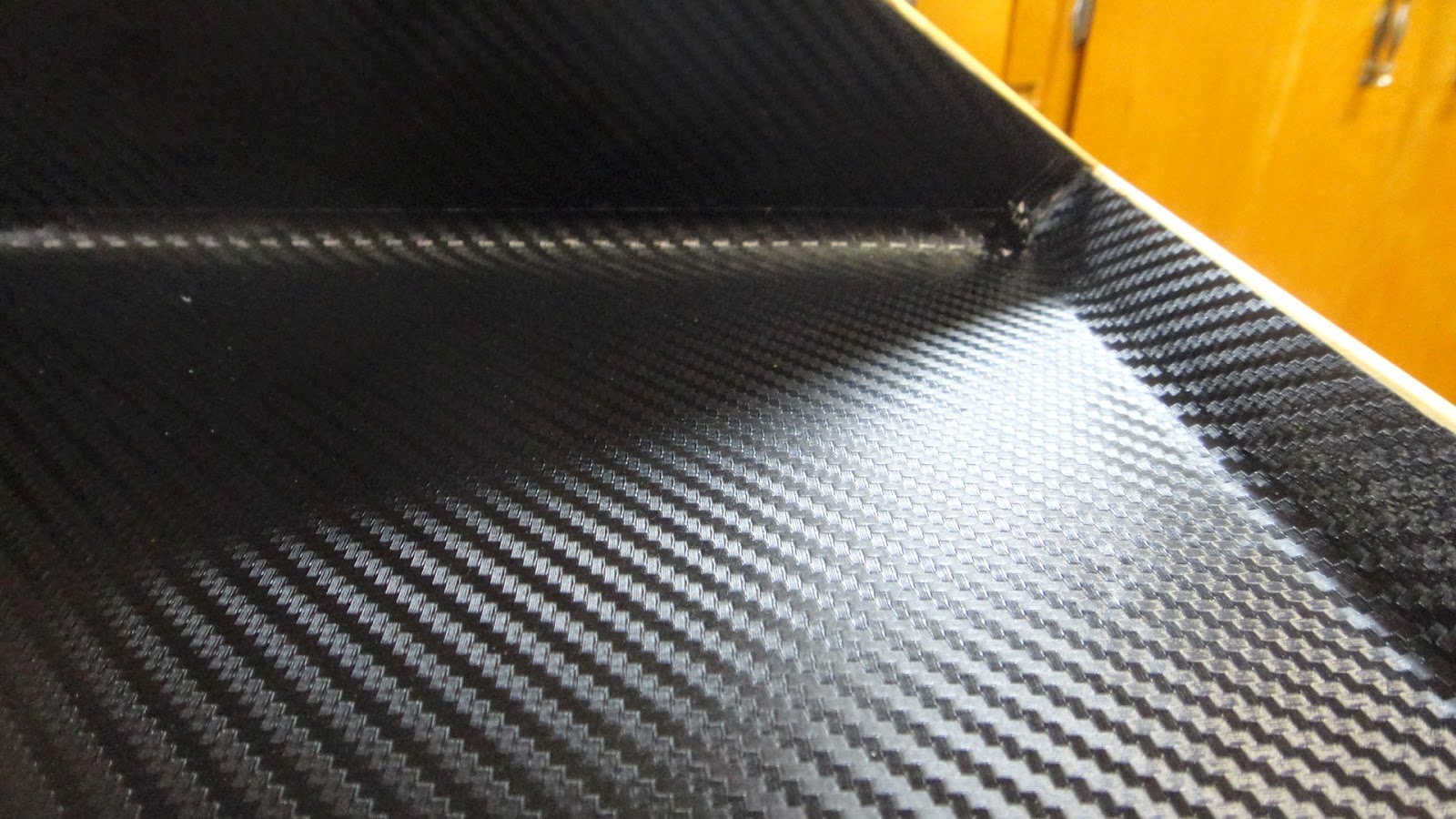 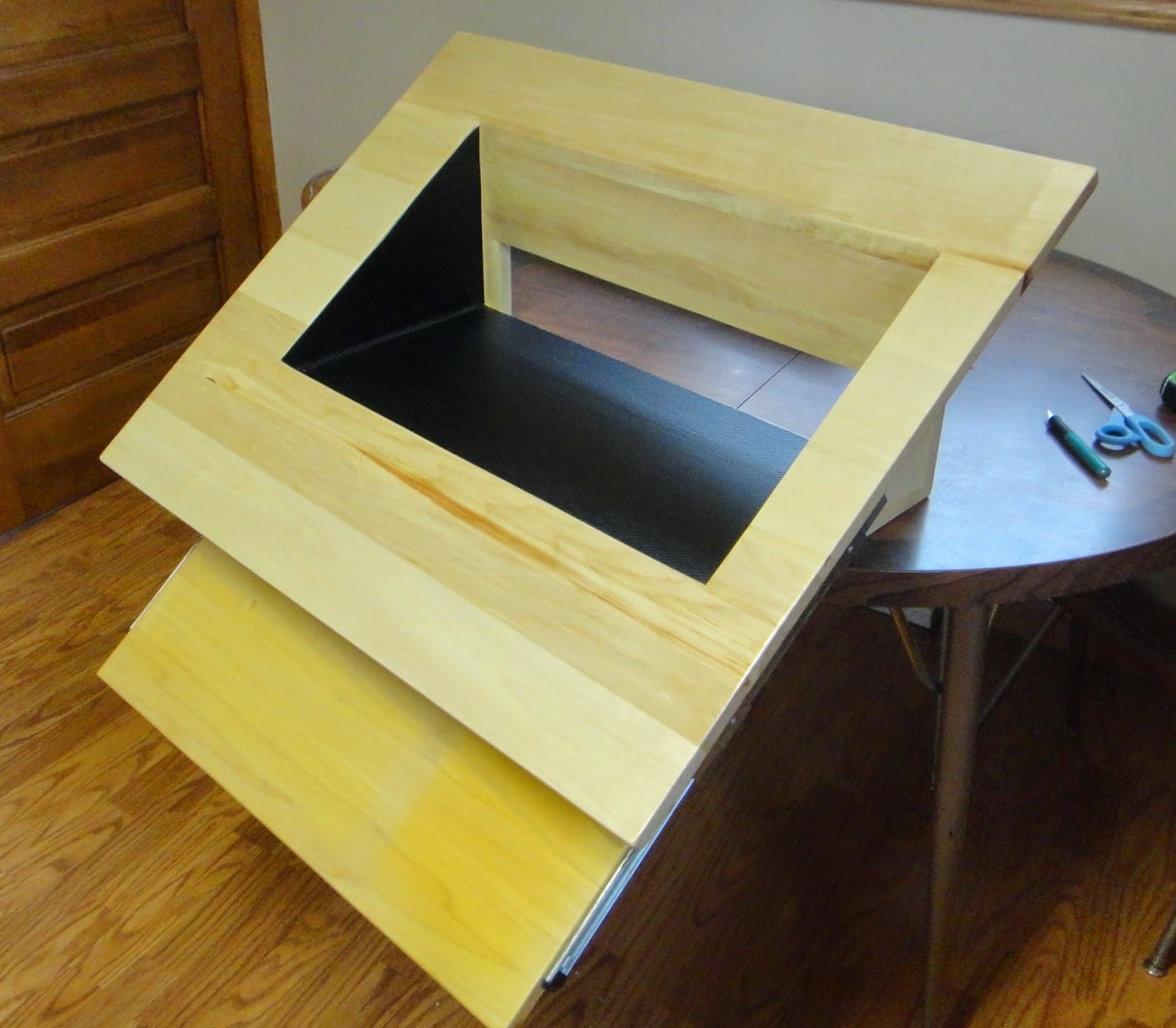 I lined the inside of the desktop cavity with a some vinyl carbon fiber that I had left over from an earlier project that I had made.  The installation of the vinyl gives the desk a really nice finished look and was not really difficult or time consuming to install.  A great look to be sure. 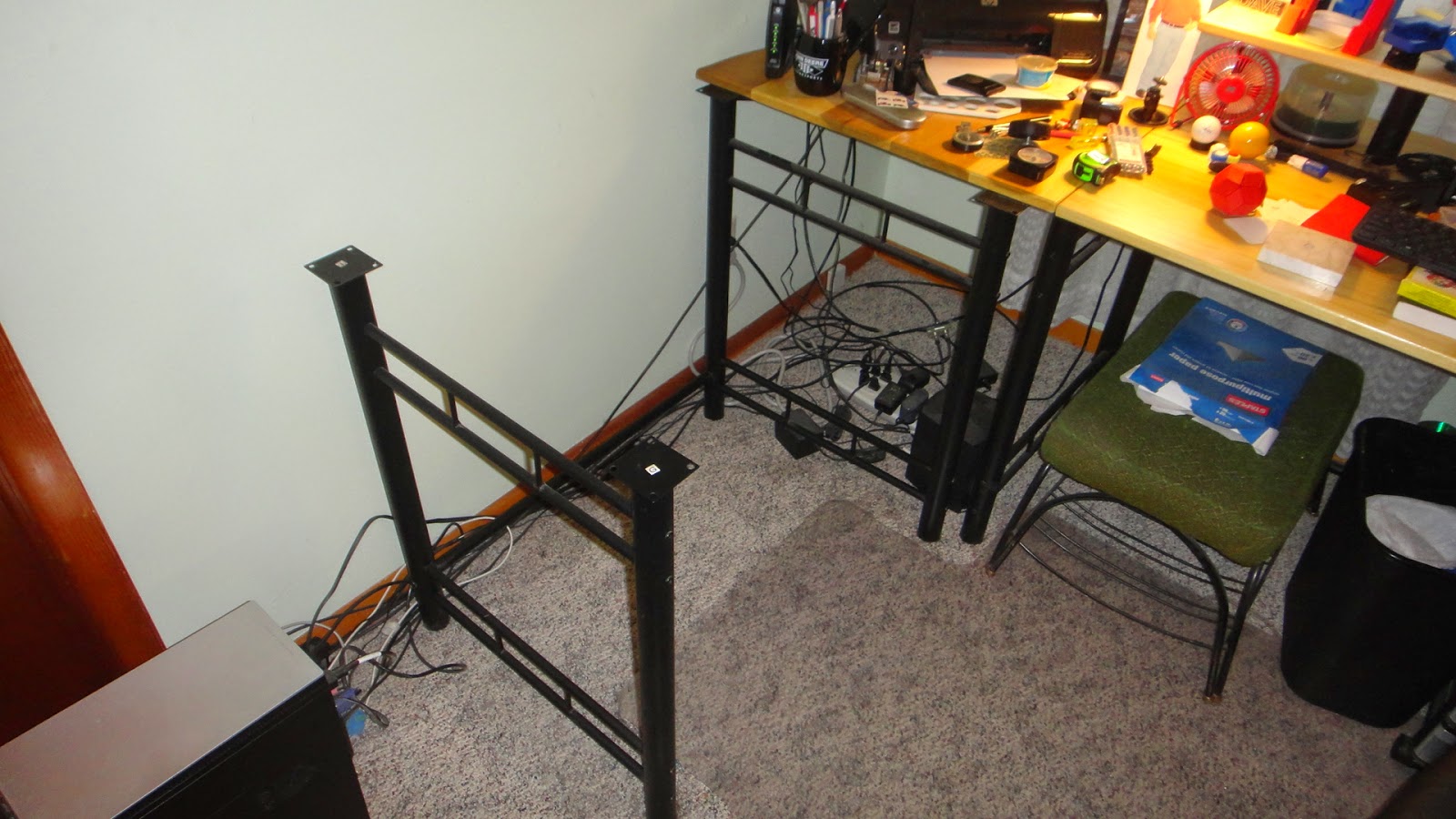 Here is the section of the desk that will receive the new desktop.  Luckily the legs of the desk stand up by themselves and so getting everything to line up properly was a piece of cake. 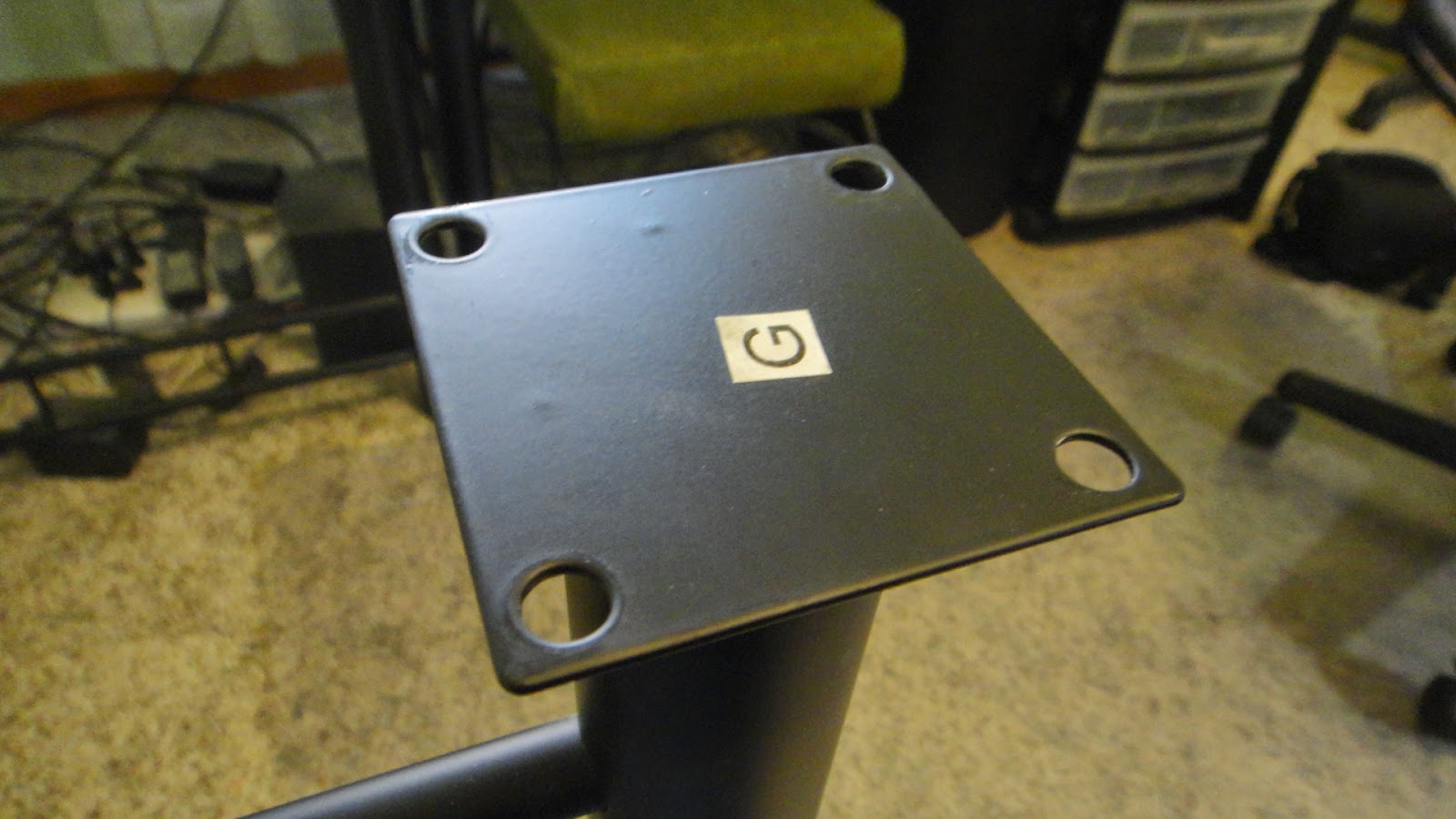 This is one of the flanges that or on the top of each leg of the desk.  Machine screws are inserted through the holes in the flanges and then into the threaded inserts on the underside of the desk that I and installed earlier. 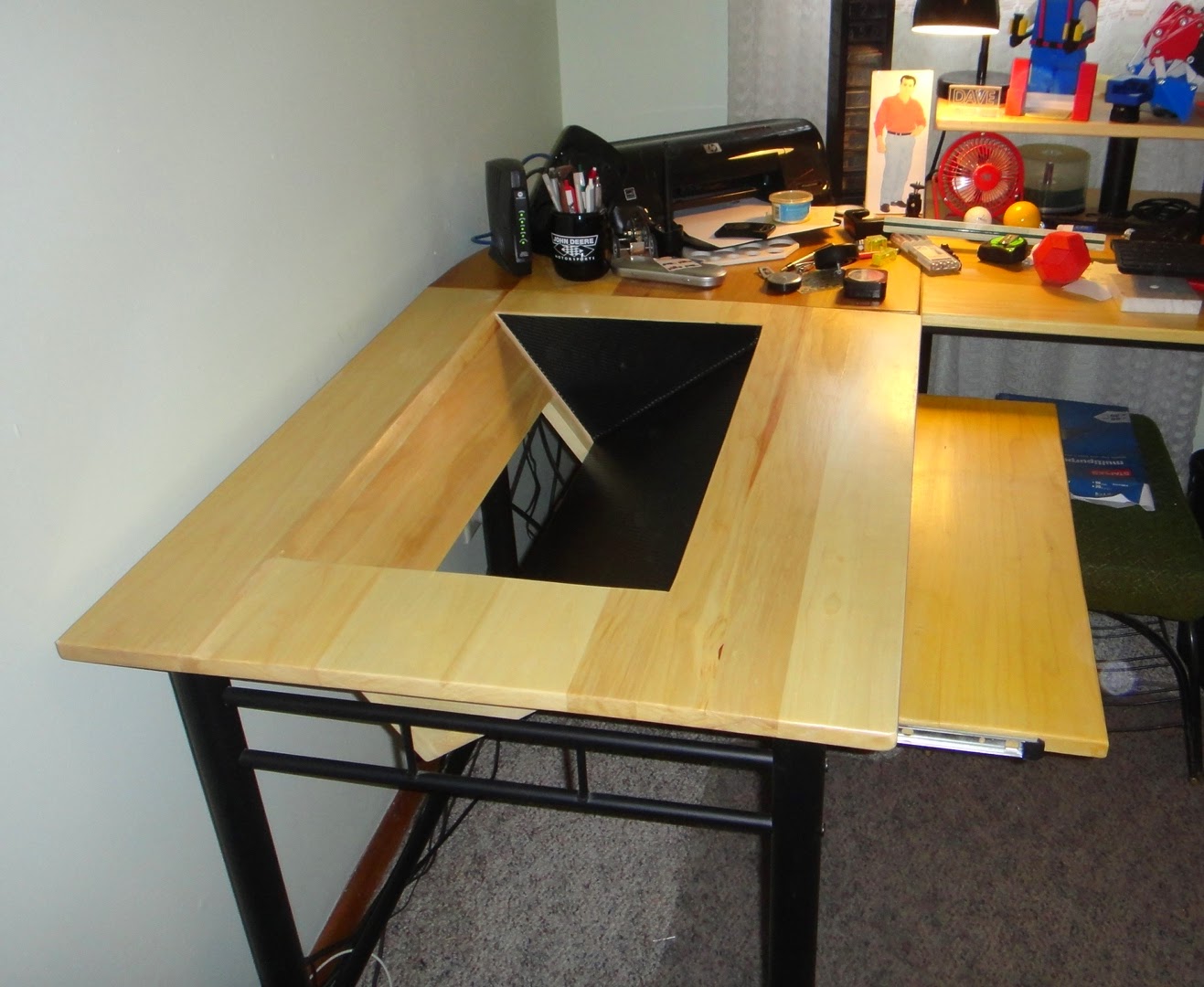 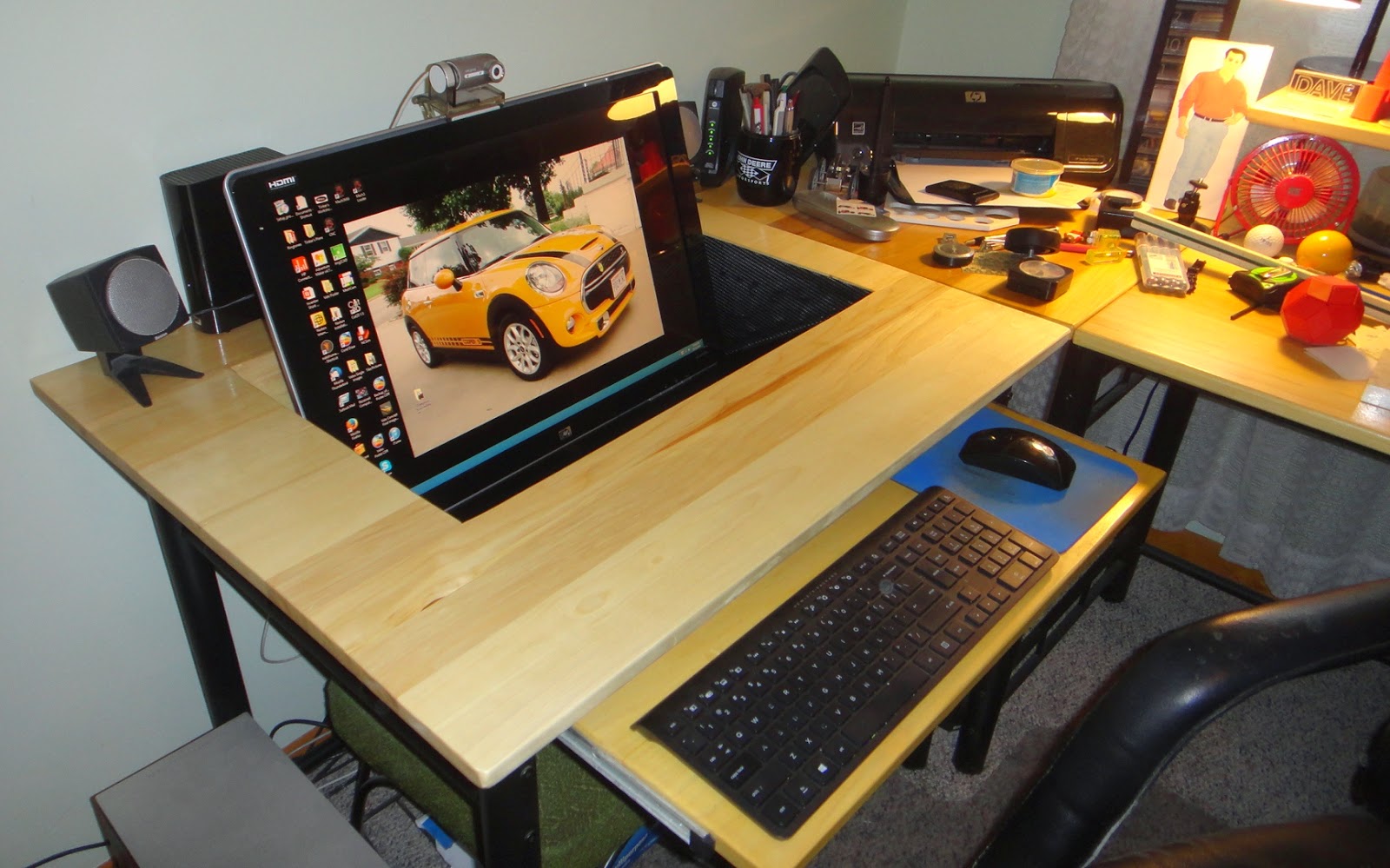 With everything hooked up my computer is back up and running again.  All I had to do is place the monitor into the desktop cavity and plug in the cables through the slot in the back.  Very simple installation to say the least. 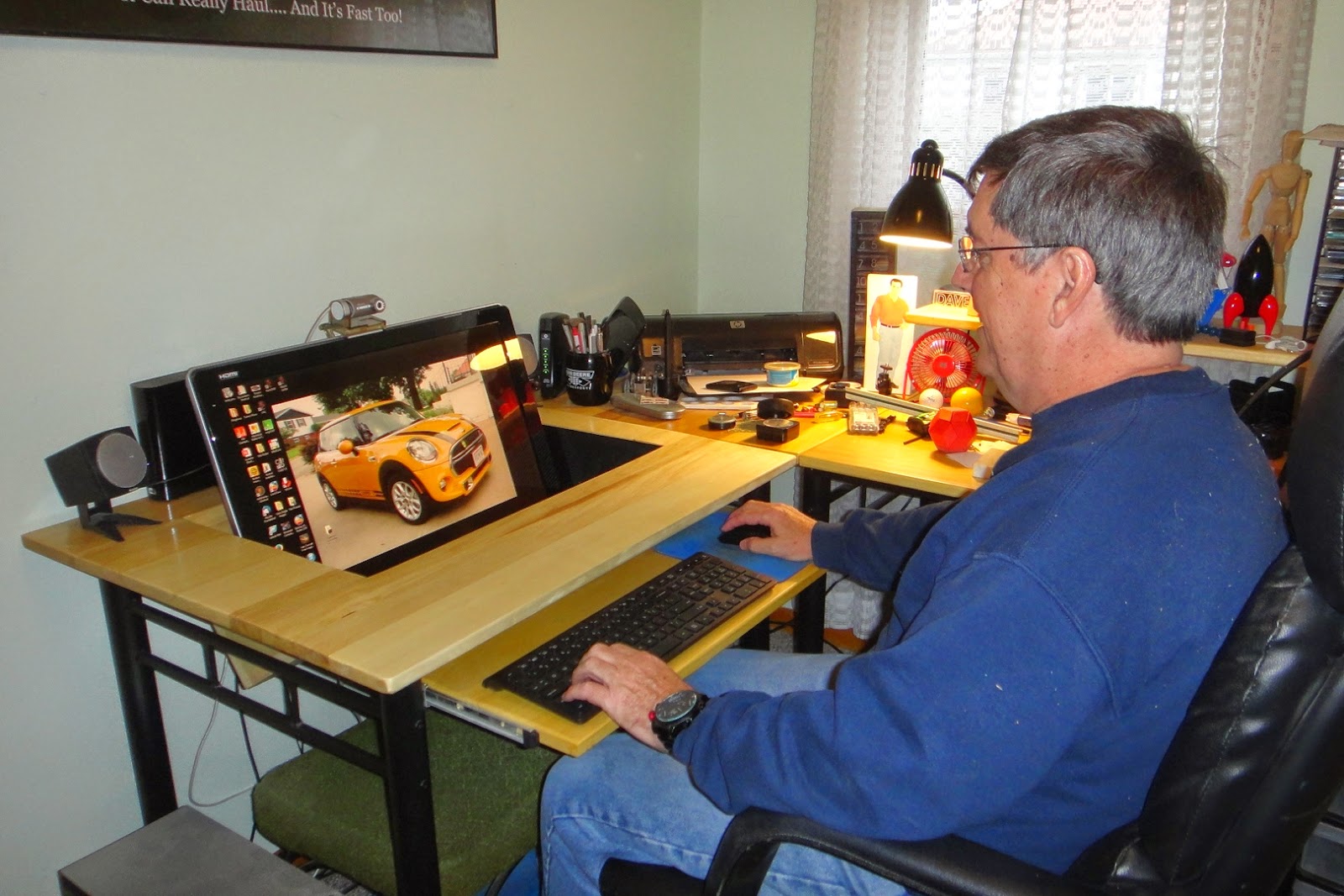 This gives you a much better idea of how the project looks while being used.  It was another great project that I've been wanting to do for a very long time and will be a pleasure to use for years to come.  Now I can let the dust settle once again in the workshop and give my neck a rest as well.  Oh and by the way I'm getting my eyes checked for new bifocals next week.  Enjoy the photos and the post.
Posted by Dave Langkamp at 2:53 PM