I came across an old project that I had started almost a year ago in Blender 3D.  As most of my readers already know I am a big fan of Blender and of modeling vehicles.  I started work on a Lancia Stratos rally car model in Blender 3D almost a year ago.  The last time I posted about this project was back in November of 2017 so I thought I might as well get back at the project and put it finally to rest. 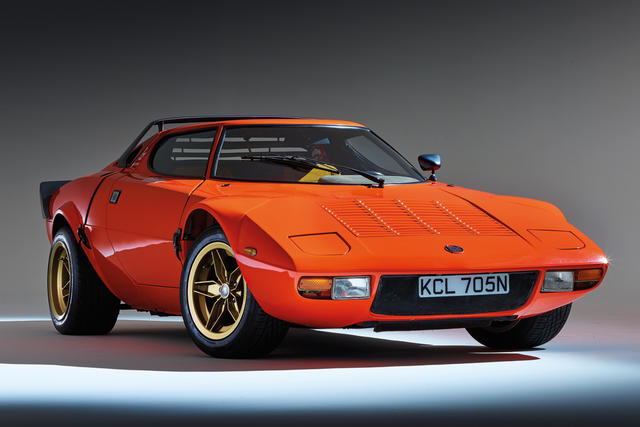 Here is a photo of the real car as it was being produced back in the 1970's. Four hundred and ninety-two of these beautiful rally cars were produced between 1973 and 1978. They were very successful in that time.  I wonder to this day why it was never produced as a production vehicle.  It would have been an amazing car to own and drive I am sure. Anyway I fell in love with this design many years ago and so decided to model it in Blender 3D.  Here is my end result. 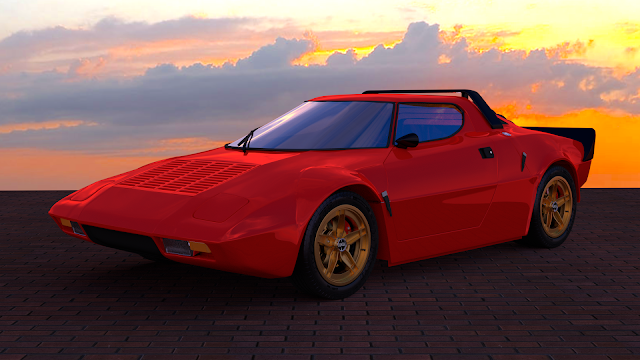 (Click on any image to get a larger view)

I really like how the vehicle turned out. I am even more happy that I had not lost the Blender model during this long delay in finishing it.  I put the finishing touches to the model late this afternoon. 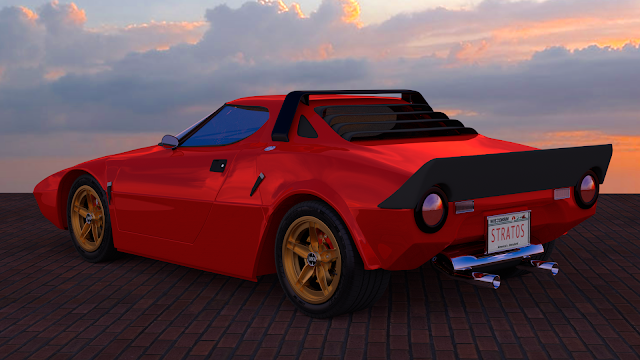 I just had to add a Wisconsin license plate as it seemed only fitting that I should put that on the car of my home state.  I spend a lot of time working on the lighting for my models and with what you see here this project was no exception. 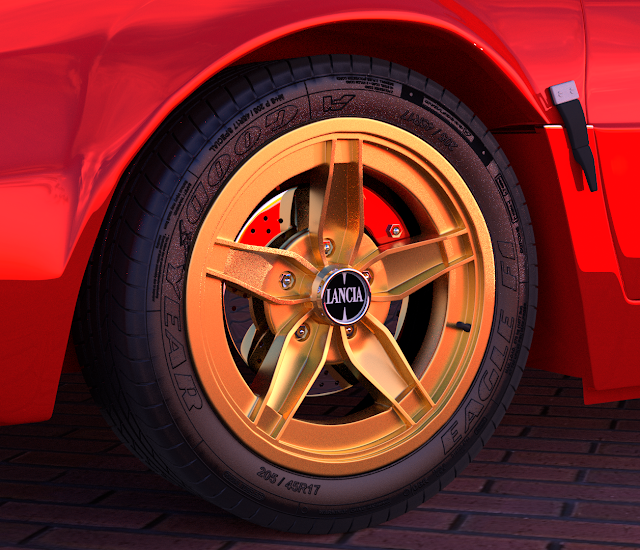 Here's a nice close look at the detail that I managed to get into the modeling of the rims for the Lancia. These rims are as close as I could get to the original rims that came on the car.  Another nice effort on my part and another great vehicle to add to my Blender 3D vehicle collection.

If you would like to see where I started with this model check out my directory on this blog back in November of 2017.  That is when I did all my ground work for the model.
Posted by Dave Langkamp at 5:27 PM No comments: Links to this post

After have used my Creality CR-10 S4 3D printer now for a good portion of this year I have finally gotten around to making one last change (hopefully) to the setup for the printer.  This being the filament out sensor that came with the printer.  There is really nothing wrong with the sensor itself as it does the job very well of letting me know that I need to change filament when I am printer something rather large. The mount for the sensor is designed well enough to make it work but is poorly designed in the way it is mounted to the 3D printer. 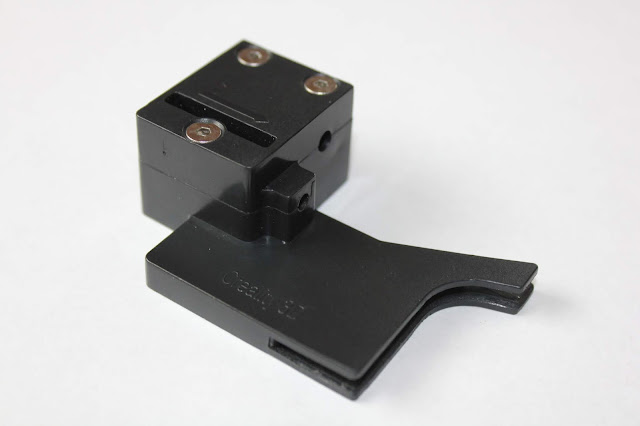 Pictured above is the sensor that is used on my Creality 3D printer. I am sure that this is used on all models of the Creality line and so all the people that use these printers have experienced the same issue with this setup.  At least I assume this is the case.

In the housing of the sensor there is nothing more than a small switch that is turned on when filament is fed through it to be printed. Once the filament has passed through the sensor the switch is turned off and stops the print.  Great!  Just what I need for my big prints.  But the problem is the flat section of the housing that you see extruding out to the right lower base of the square shaped sensor housing. This flat section is simply slid on to a flat plate on the 3D printer where the extruder stepper motor is mounted.  This is all well and good as long as you do not have a large part to 3D print.

If you do then the vibration of the machine slowly loosens this assembly to the point where it will eventually come loose and dangle on the filament that is being fed into the printer.  Not a good thing to have happen while printing parts. 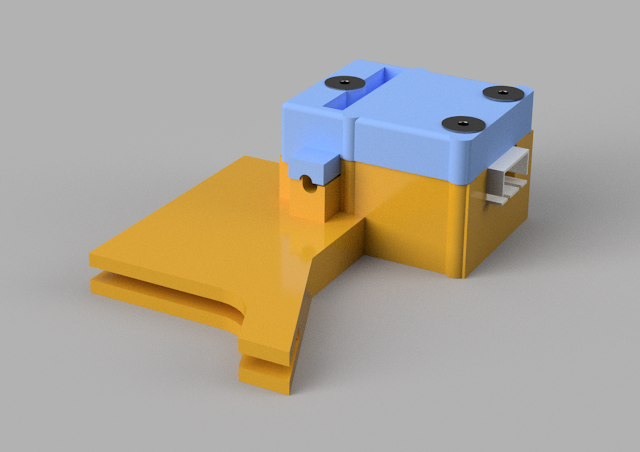 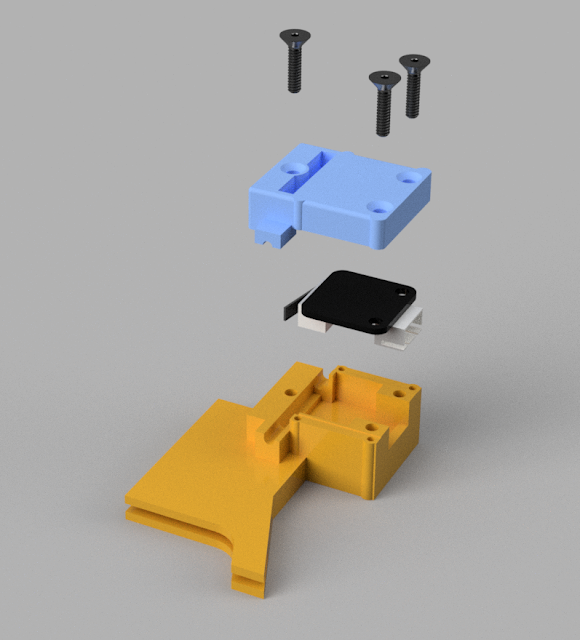 In the images above you can see the computer model I created to show you what this sensor looks like when it is assembled and taken apart.  At the bottom (in yellow) is the mounting for the sensor and the two flat plates that are slid on to the stepper motor mount.  Above this part is the sensor (in black & white) with a little arm to turn on and off the sensor on the left and the connector socket on the right.  Next up is the cover for the sensor (in blue) and finally the screws to secure the cover to the assembly. 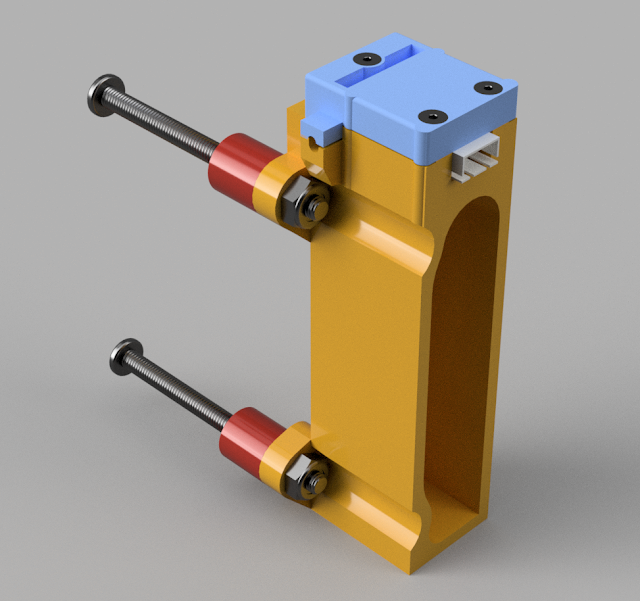 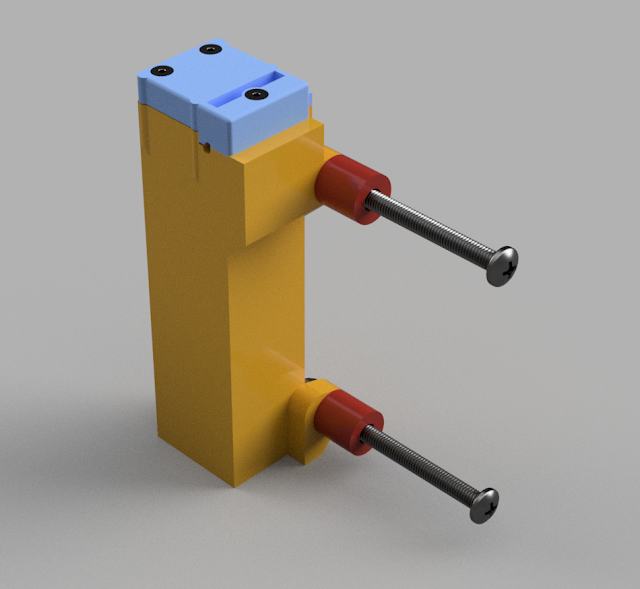 To make a more secure mount for the filament out sensor I designed a new assembly as pictured above. The new assembly eliminates the lower portion of the original mount and replaces it with a taller rectangular base that is attached to the 3D printer using 10-32 bolts that are 2 1/2 inches long with additional locking nuts.  These bolts replace the bolts that hold the rollers for the "Z" axis of the printer on the left hand side of the machine. 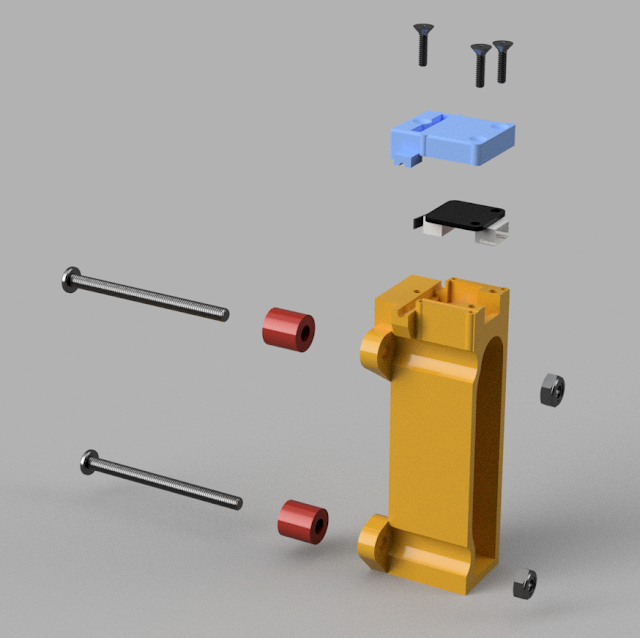 I saved the original top cover and mounting screws for the new assembly along with the sensor switch needed to make this all work.  In the image above you can see these parts along with the 10-32 bolts and nuts and two small spacers (in red) that allow clearance for the assembly to keep it  away from the stepper motor  that is used for the "X" axis on the machine.  Another thing that took me some time to get designed right was the upper portion of the new lower section of the assembly.  This had to match the lower portion of the original mount so that the sensor switch would mount and work properly.

This took a lot of trial and error prints to get it right and needed to be done to make the new assembly work just like the old assembly without the issues of it falling off of it's mount.

I also had to be very careful to get the placement of the top portion of the new assembly in the exact location of the original sensor so as to not mess up how it all worked in the process.  So far I think I have it pretty well nailed down so I think I am good on that point. 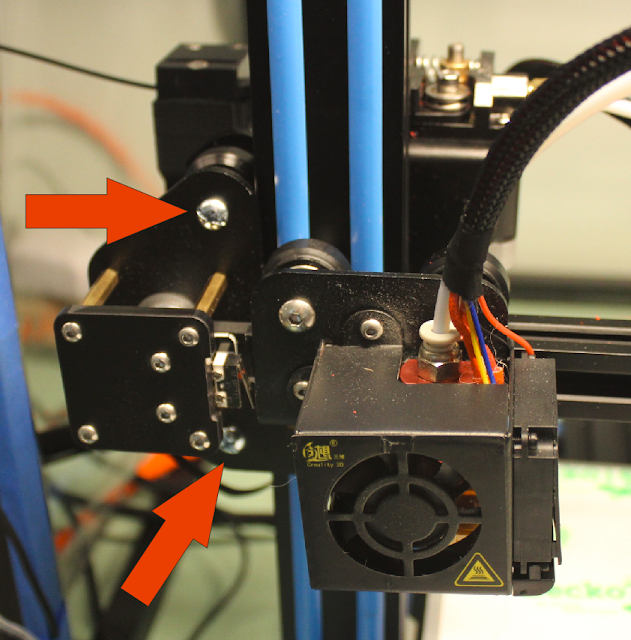 Pictured above is the new sensor out assembly mounted into my 3D printer.  The red arrows indicate where the 1032 bolts are mounted that hold the sensor along with the rollers that guide the "X" axis rail on the left side of the machine.  This rail moves up and down for the "Z" axis on the printer. 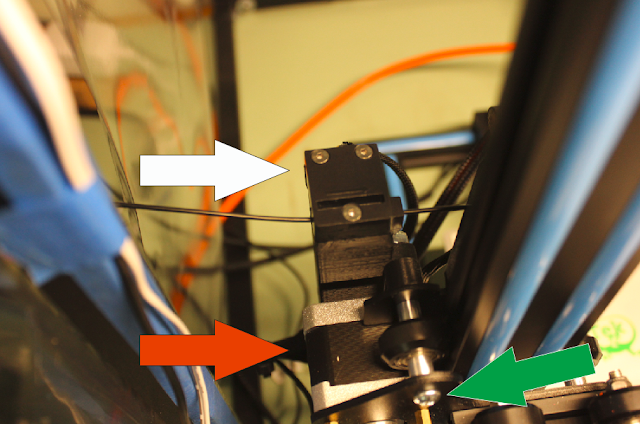 This new setup will be a big plus to my 3D printing as I will not have to keep fussing with the filament out sensor every ten minutes to make sure that is still in position where it needs to be.  With this new mount it is securely fastened with lock nuts and does not interfere with anything else on the machine while it is running. A big improvement in my book.

Just one more thing that the people at Creality hopefully will take notice of and put on future machines that they produce. "Hey Creality! If you do make this change please let me know. I can  always use another 15 minutes of fame."  At least it will make my day anyway.

I am happy to report that this project has finally been completed.  I had to look at older posts to see exactly when I started this project.  To say that it has taken some time is definitely an understatement.  The first posting about the project was on May 2nd of this year.  Four months of waiting and delays have been the order of the day so I am more than happy to finally sign off on it and call it done.  So without further delay here is the end result of my efforts. 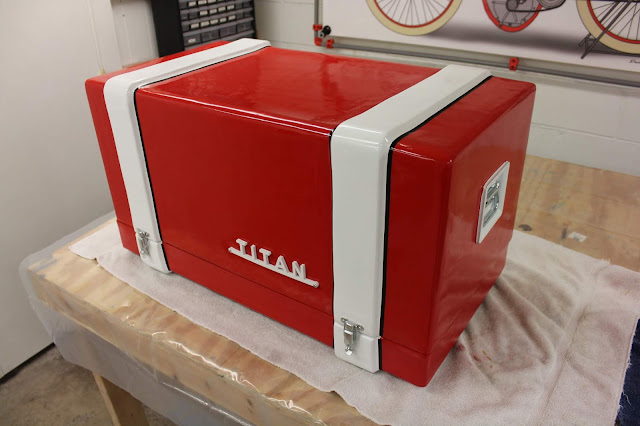 I am very pleased with how the case turned out. With all of the delays in getting this done it turned out much better than I had hoped.  The case is 15 inches wide by 15 inches tall by 30 inches long. A very big case to be sure. The painting of the case went like clockwork so that portion of the build did not slow it's completion down during the build. A plus to be sure. 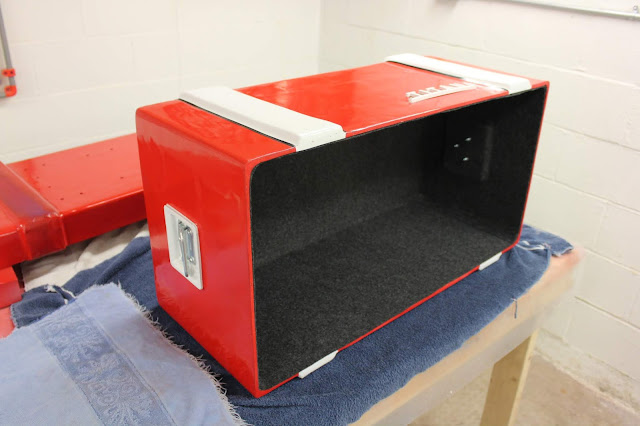 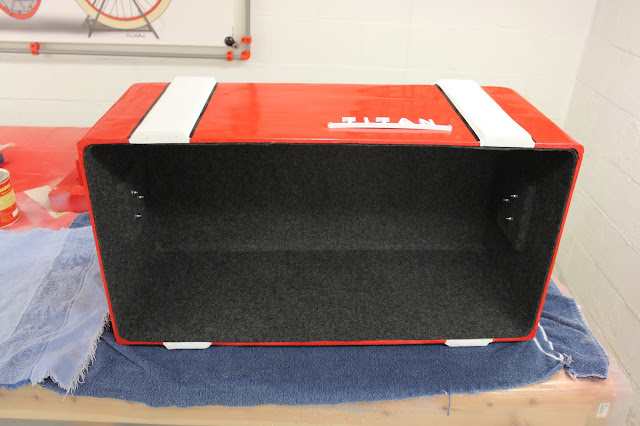 In these two photos you can see that I have lined the case with gray felt.  I used a brush on contact cement and managed to get everything laid down smoothly.  It took roughly four hours to get the felt glued into place for this section of the carrying case.  I had already had all of the holes for the name plate and handles for the case already set up so it was an easy task to add these parts after the case had been lined. 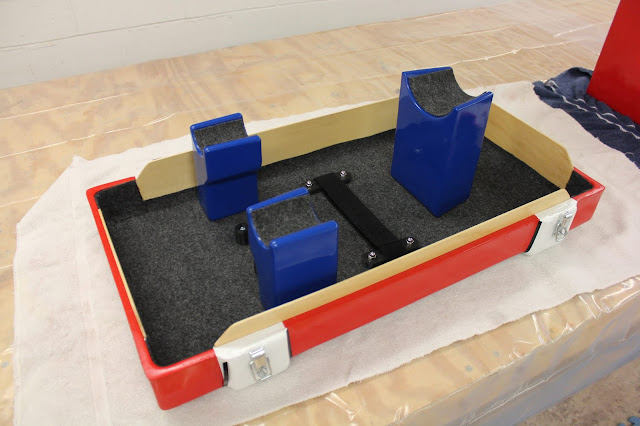 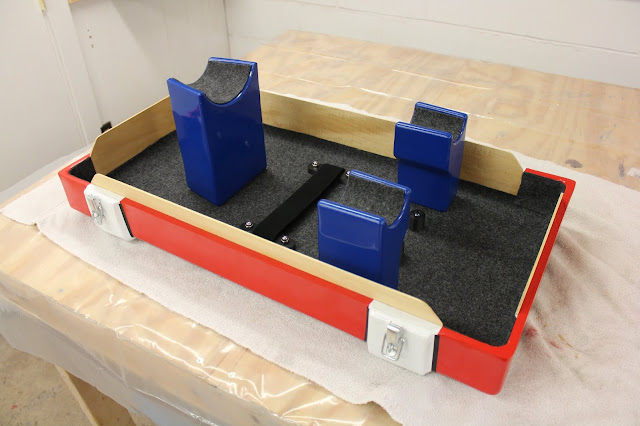 Next came the base for the carrying case.  This also had been set up with all of the mounting holes for the case so it was just a matter of mounting the wooden guide plates into the case first and then lay down the gray felt once again to give it a nice finished look.  The felt for the base took 2 1/2 hours to mount to get it right as well.  The blue pieces that are also lined with felt are the mounting cradles for the spaceship model.  Lining these cradles helps protect the paint on the spaceship model. The cradles I fiberglassed  and painted earlier in the project so they were ready to assemble at this point as well.


The black strip you see in the photos is actually a Velcro strap that is used to hold the model securely in the case when it is being transported.  All in all I am very pleased with how easily all of this came together in the project. 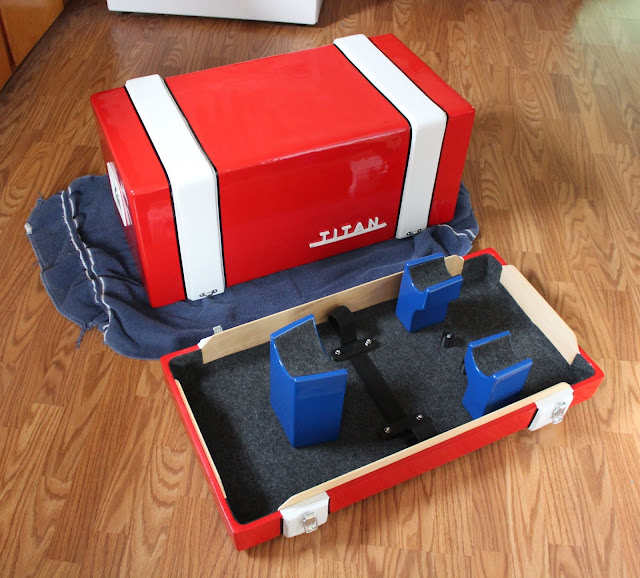 I had to shoot this photo of the carrying case on my kitchen floor to get it all into the picture.  Again you can see the Velcro strap that is in the base of the case and the three cradles for the spaceship model. 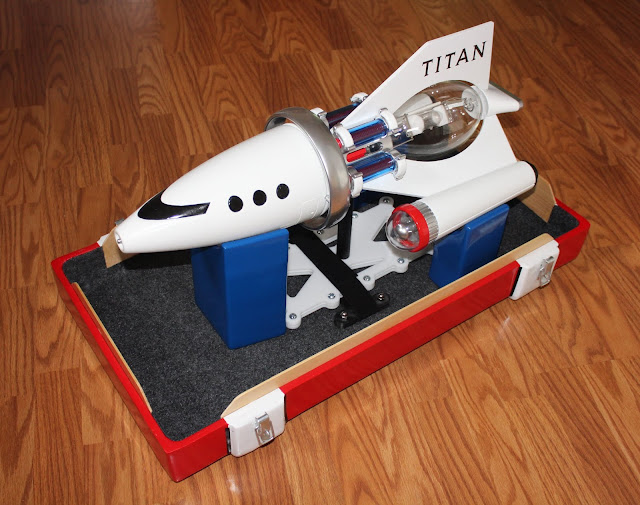 Here the spaceship model is nestled nicely in the base of the case.  When I created the cradles for the carrying case I was able to make an exact copy of the profile of the ship and have it in the cradles so it is a perfect fit. A nice clean mounting resulted from this. Now you can see the Velcro strap holding down the spaceship stand in the case. 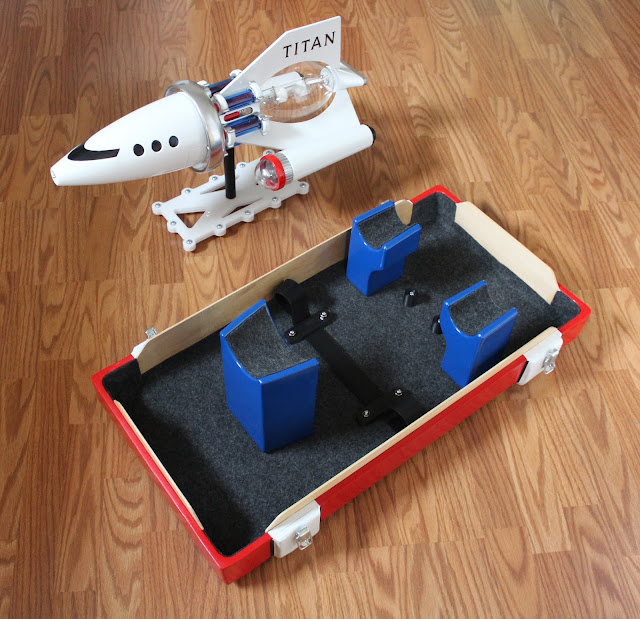 
While building the carrying case it has been a very interesting and rewarding project. If had no delays in the project it would have never taken four month to complete it. I would think it could have been done in a few weeks not months.  But no matter I am more than happy to sign off on this project and move on to the next in the workshop. Have a good day in your workshop as well!
Posted by Dave Langkamp at 8:38 AM No comments: Links to this post