This week brings great progress on my work table spray booth project.  Everything from more 3D printing of exhaust parts to construction of the enclosure itself.  So let's get to it. 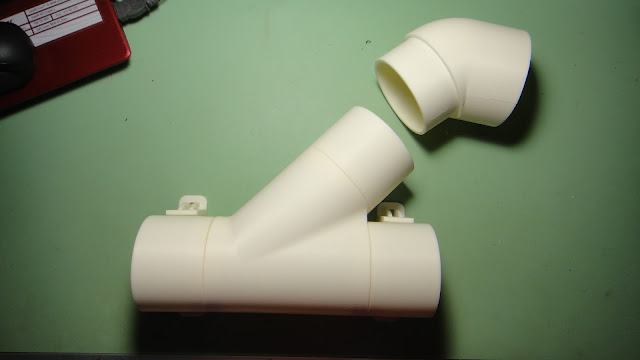 This photo is of all of the 3D printed parts that will be used in the exhaust system of the spray booth. The large part at the center of the photo is a "Y" connector and slid into it are extensions for the flexible hose that will connect to the two exhaust fans.  All of the parts have an outer diameter of three inches.  Just the "Y" part without the smaller extension took 8 1/2 hours to print.  But it like all of the other parts simply cannot be bought.  Cost to make the parts were around $8.00. 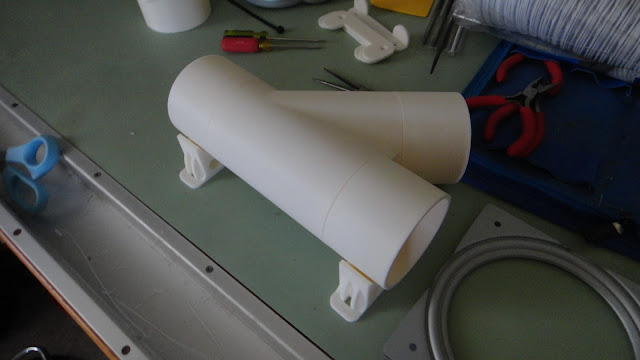 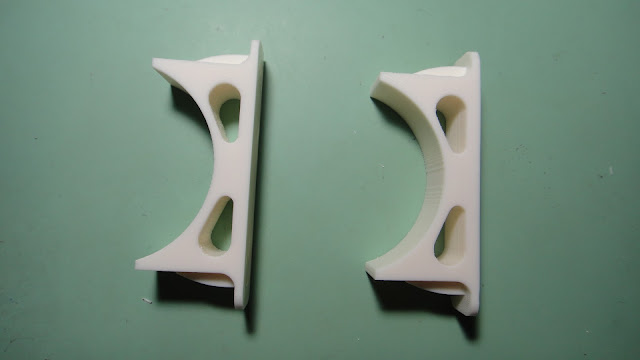 The top photo above is the same "Y" connector with the extensions along with the mounting parts that you see in the lower photo.  The "Y" connector and it's parts will be tied together to the lower mounts using zip ties.  The zip ties that will be fed through holes in the back of the spray booth and should stay in place rather nicely.  Simple is always a good thing.  So with that sorted out I started working on the construction of the spray booth itself. 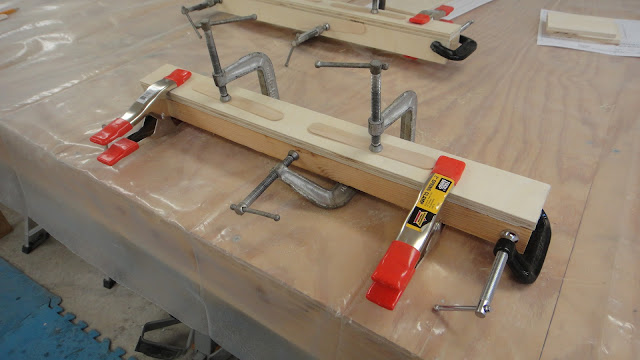 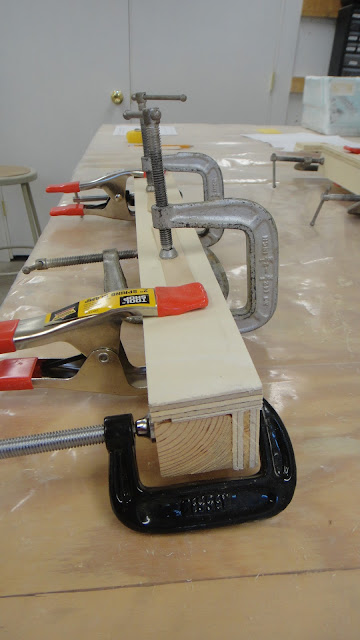 The photos above are mountings of the framework for the spray booth that surround and hold the furnace filter in place.  I stacked and glued two pieces of 1/2" plywood on two side of a 2 X 2.  I needed two complete assemblies that were exactly 1" square.  I didn't have any wood that I could cut down to that size so I used what I had on hand.  Doing it this way was a bit more work but I still managed to get what I needed and the parts end up inside of the spray booth and will not be seen once the booth is completed so it really didn't matter how they looked as long as they did the job. 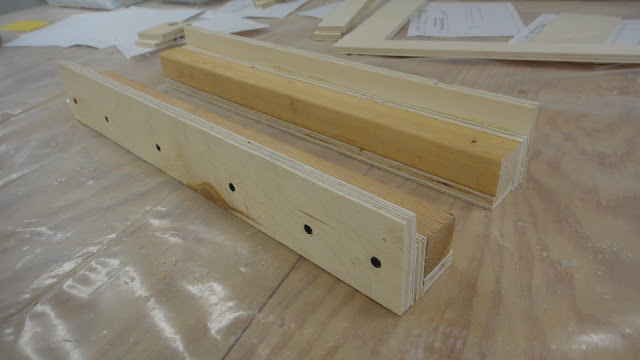 I then attached a three inch wide strip of 1/2" plywood to one side of these first assemblies.  This strip of wood is the guide for the furnace filter so that it can easily be installed into the spray booth. 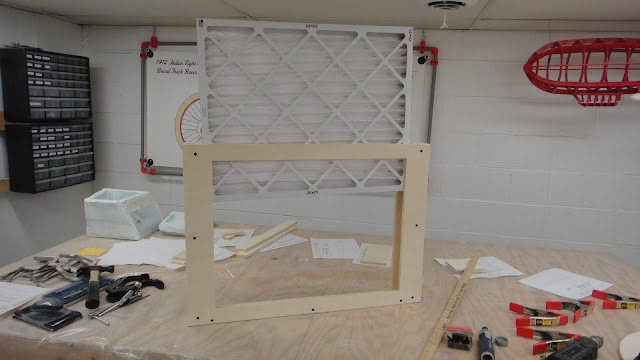 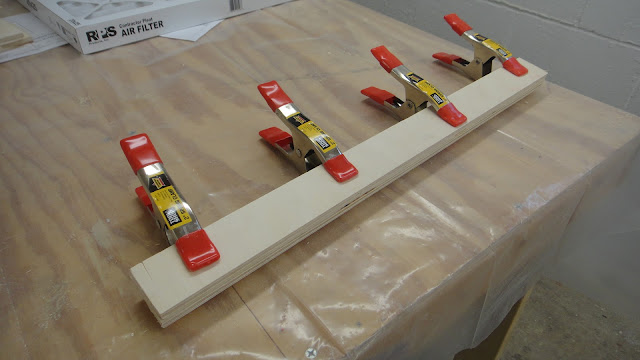 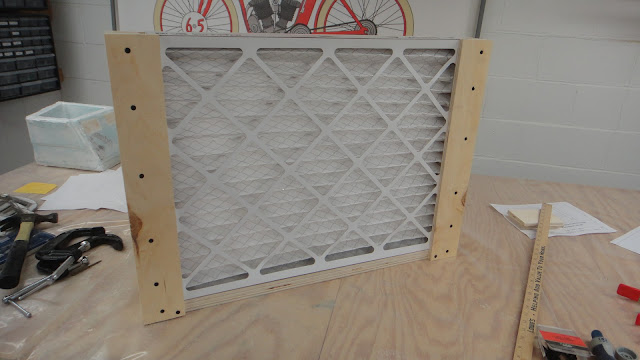 I next took the two small assemblies and attached them to the front filter face that was cut out of 1/2" plywood (top photo).  The middle photo is another small assembly that was used in this portion of the build.  It is simply two pieces of 1/2" plywood 2" wide and 25" long glued together.  They are used in the final assembly to center the furnace filter vertically with the front filter face opening. The lower photo is the backside of the assembly with the furnace filter installed into the assembly. 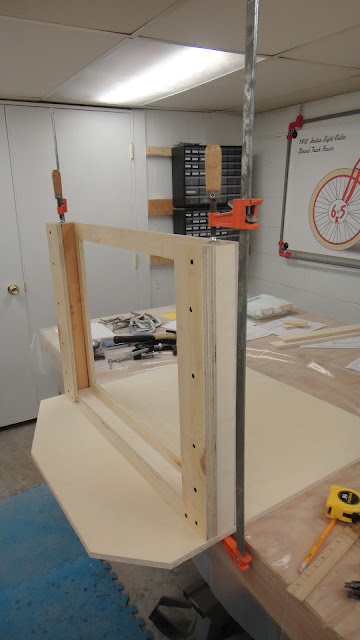 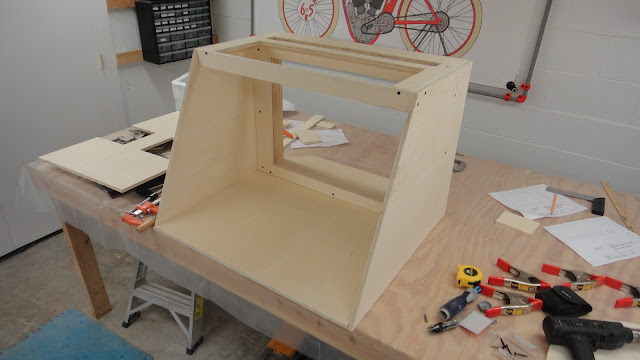 With the filter frame assembly nice and secure I mounted the sides and top of the spray booth.  I made sure that the slot for the furnace filter matched up with the top plywood  part slot.  I again clamped everything in place and then screwed it all together using fine thread #6 -1 1/4" drywall screws.  At this point things were coming together nicely as you can see from the photo above. 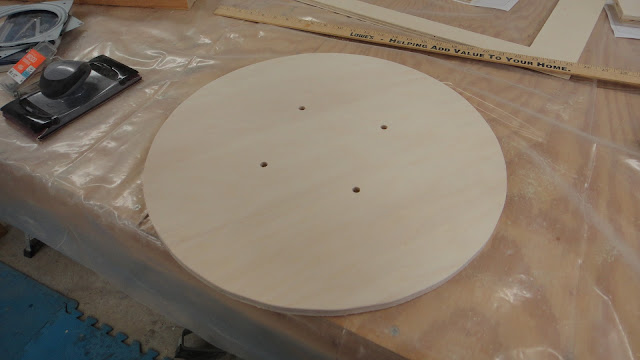 I then got to work on the turn table that will be used in the booth.  As with the rest of the assembly I used 1/2" plywood to cut out a nice 18" diameter circle.  I had marked center lines on the square part before cutting it to get my holes lined up for assembly of the bearing plate that will make the turn table work. 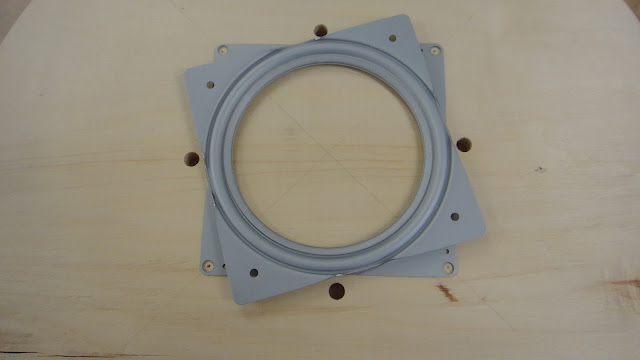 Here is the bearing plate along with the mounting holes set up for it.  The bearing plate will be screwed to the circular 1/2" wooden piece and then in turn it will then be screwed to the inside top surface of the base of the spray booth.  The larger holes in the photo are there so that the turn table can be rotated to allow the lower screws to mount to the spray booth base. 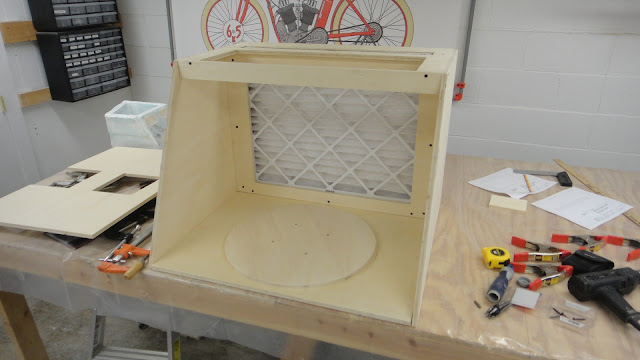 I figured right with the size of the turn table as you can see in the photo above.  The turn table is 18" in diameter and the inside of the spray booth is 20" x 29" in size.  I thought this might be to large but from the looks of it..... it will be a nice sized area to spray parts in. 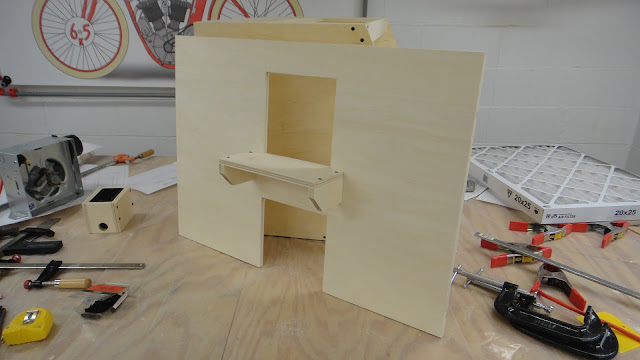 Back to completing the spray booth construction I assembled the mount for the upper exhaust fan.  It was simpler to assemble the little shelf while the back of the spray booth was not mounted to the rest of the assembly. 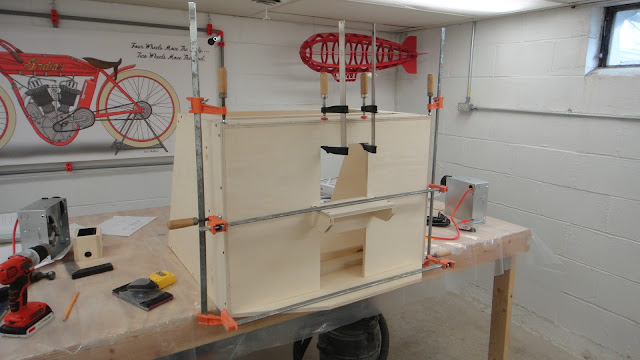 I was really happy that I had more than enough clamps to get the last large piece of the spray booth held in place.  There is no such thing in a workshop as to having to many clamps.   Before I started clamping this last part in place I was not sure I had worked everything out correctly.  Once I clamped it all down I breathed a sigh of relief as the fit-up was near perfection.  Nice to see for sure. 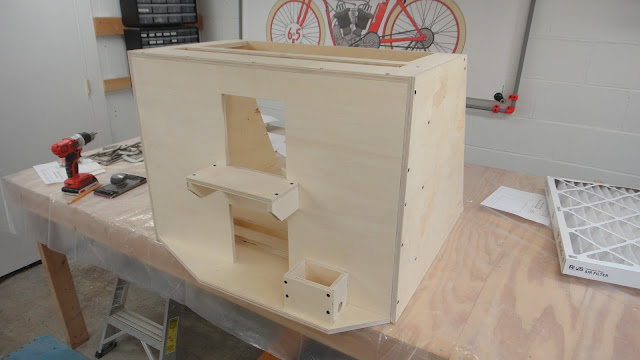 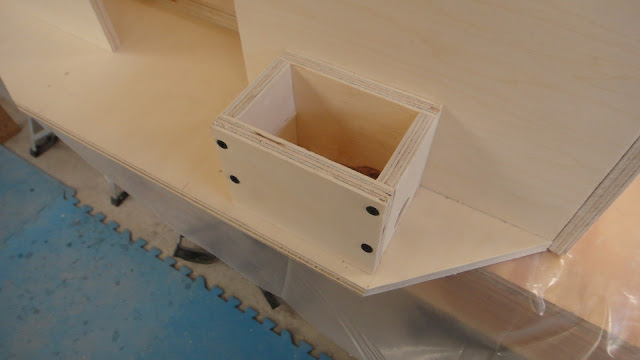 With the back of the spray booth in place the fit looks great.  The smaller box on the lower portion of the back is the mount where the electrical switch will be located for the booth.  Again I put this little box together before mounting it to the main assembly.  Made things a lot simpler. 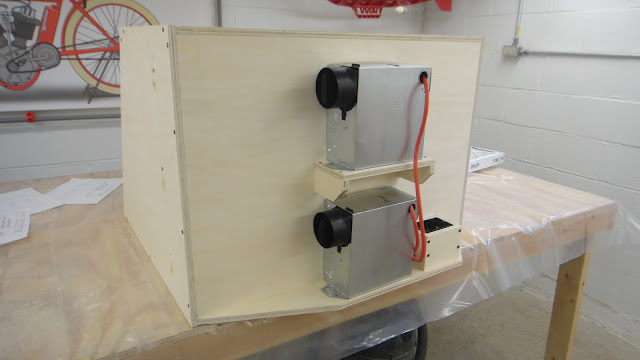 Now with all of the wood construction completed I was able to get this shot of the two exhaust fans that will do the work of moving the air while I am using the spray booth. 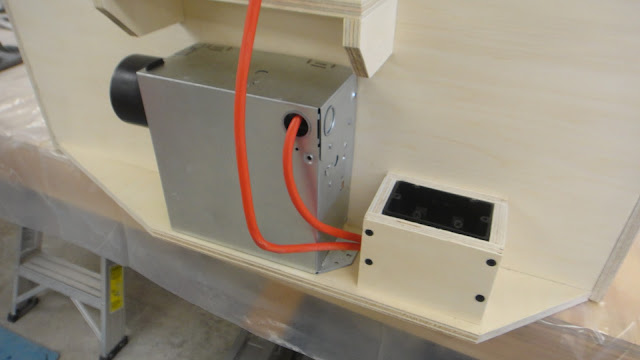 The wiring as you can see will be fed into the lower switch box and then wiring will come out of the box and be used to plug into a wall socket.  A nice clean installation. 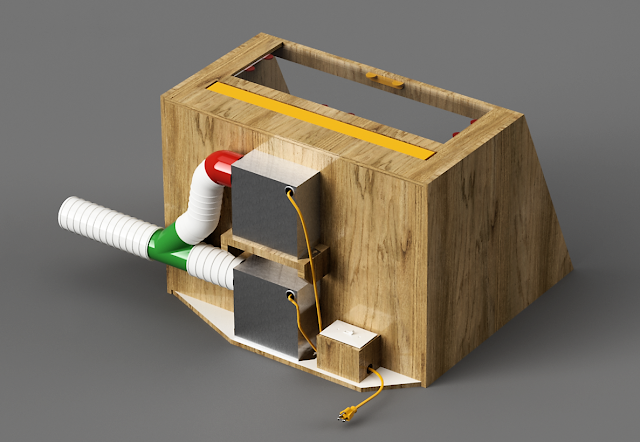 This is how the entire exhaust system will look once I get it all wired and hooked up to exhaust hoses. But that will come in the next installment of this project.  I more than likely will paint the spray booth rather than varnish it as shown in the photo above.  This will make is simpler down the line if I should ever want to spruce up the spray booth after a couple of years of use.   So that's it for today.  I'll keep plugging along on this project and I should have it wrapped up in the next posting.  Have a good one.
Posted by Dave Langkamp at 10:26 AM No comments: Links to this post

With my last post I talked about a custom designed cooler for the trunk of my Goldwing motorcycle that I am working on.  I realized early on with that project that I want to paint it once I have the fiber glassing work completed.  So this project was born out of that need to paint something during the colder months of the year and when I have a project small enough to do so in my shop without creating a mess or a hazard to my health.
I did some research once again online and found all kinds of designs for a small spray booth or box that would sit on my work table when the need called for it.  I wanted it large enough to handle a good size project or part but not so large that it would be a pain to pick it up and move it out of the shop when it was not in use.  So with some refinement and design work on my computer this is what I am also working on at the same time the motorcycle cooler project is underway. 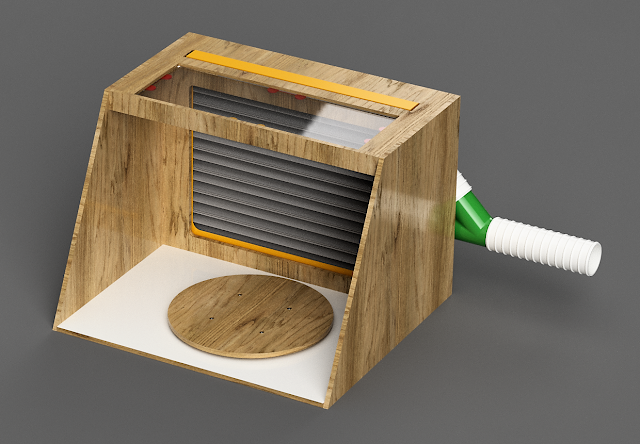 My design is nothing fancy but does have some nice features.  The inside dimension of the booth are 20" high, 20" deep, and 29" wide using 1/2 thick plywood. On the base of the booth is a 16" turntable that is used so that any part can be rotated while painting it.  This was easily created using a 6" Lazy Susan bearing that I picked up at my local home and builders store.  This is attached to the inside base of the booth and then a 16" diameter 1/2" thick diameter piece of plywood is attached to the bearing.  Simple and easy to set up.
At the very top of the booth you can also see the Plexi-glass window that will allow additional light into the spray booth without the need for more lights and added cost. 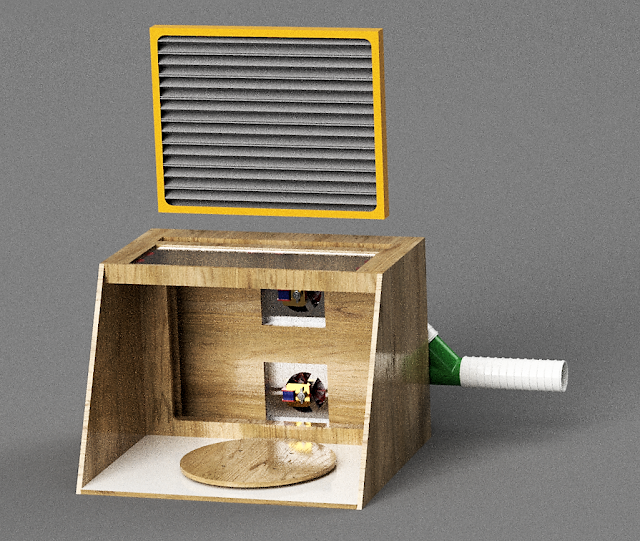 In the back of the spray booth is a 20"x 25" furnace filter which will do the job nicely of cleaning up the air that the booth will extract while in use.  This filter is simple dropped into place from the top of the booth. With the filter removed as shown in the photo above you can easily see the two 50 cfm (cubic feet per minute) bathroom fans that will exhaust the air while painting. The filter will slow the air down a bit but should give more than enough airflow for the booth. 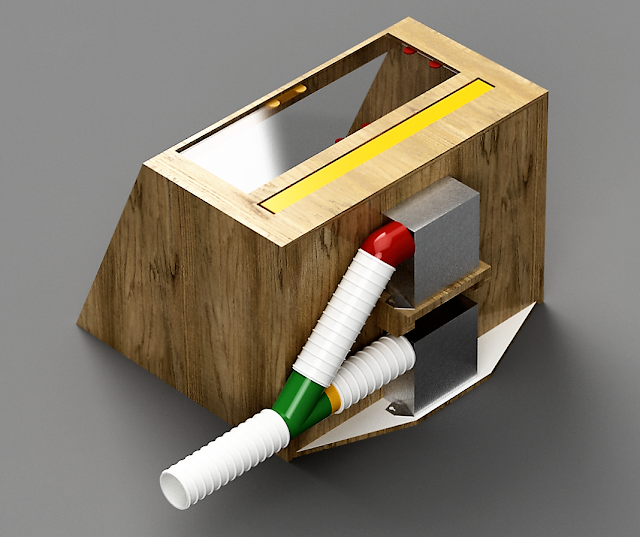 Here a good shot of the rear of the booth that I put together in the computer.  The white tubing in the view is flexible vinyl duct hose that is used with bathroom exhaust fans.  This is connected to various 3D printed elbows and joints that tie both exhaust fans into one exhaust hose which will be routed to a window and to the outside. 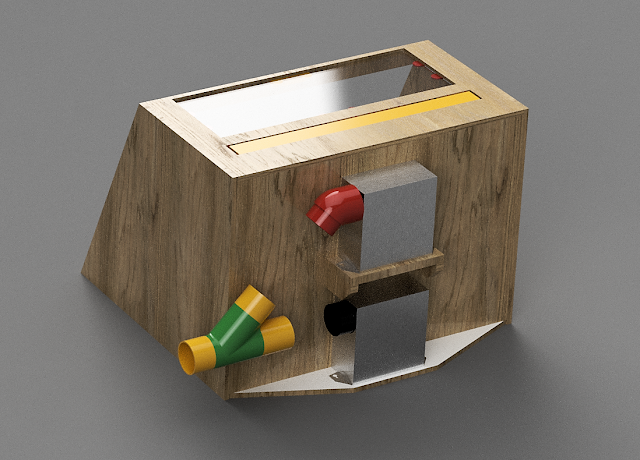 Here's a better look at the 3D printed parts that will be needed for the project.  The red elbow on the top exhaust fan is a 3" diameter 45 degree elbow.  The yellow pieces are 3" connectors for the white flexible hose and the green piece is a 3" 2 into 1 fitting.  The only reason that the yellow connectors are separate from the green fitting is that if all the parts were printed as one piece it would never fit into my 3D printer. 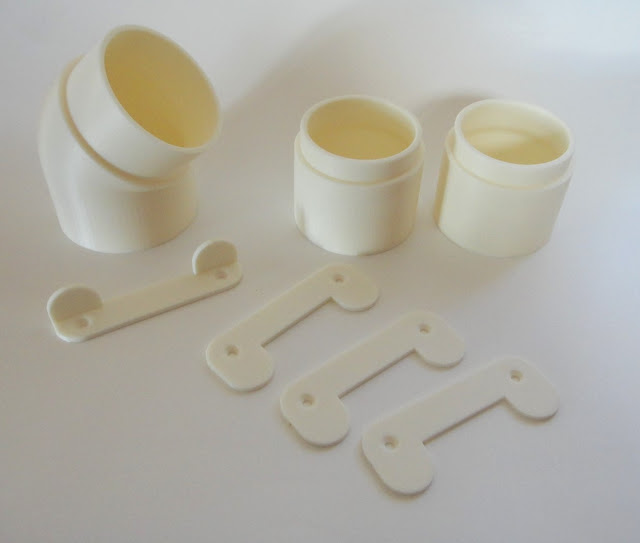 Here is what I have printed so far and it gives you a better look at what the real pieces look like.  The elbow at the upper left corner is the 45 degree elbow I spoke of earlier.  The other two cylinders are what will be connected to the 2 into 1 fitting.  The other various pieces in front of these connectors are the support tabs that will be used to hold the Plexi-glass window in place on the top of the spay booth.  I will need to add an electrical on/off switch to the paint booth yet and this I plan to mount on the rear of the booth.  The switch will allow me to turn off the fans when the both is not being used but still leave it plugged in while on the worktable.

I still have a few more supplies to get into the shop before I can start construction of the booth but just getting some of the 3D printing out of the way will be a good thing to accomplish.  The 3D printed parts above took 14 hours to make.  I figure to get all of the parts made the number of hours will climb to around 27 hours of print time.  But where else would you ever find custom made fittings like these that didn't cost a small fortune. I'll post more about this project once I get into more assembly along with progress on the custom cooler for my bike too. Stay tuned for further details in the coming weeks.  Have a good day on your current project too!

Posted by Dave Langkamp at 1:57 PM No comments: Links to this post