With Christmas come and gone I have gotten back to my ball chair project that I last posted about.  It is getting more interesting by the hour as I continue with the third section of the ball construction. 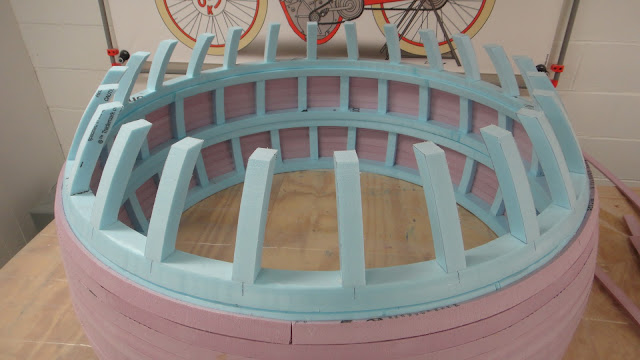 In this photo like the other sections that I have already completed I am assembling the spacers into the third section of the ball portion of the build.  This section as you can see has a much steeper angle for each of the spacers which is interesting in itself though no different in the procedure to build it than the first two sections. 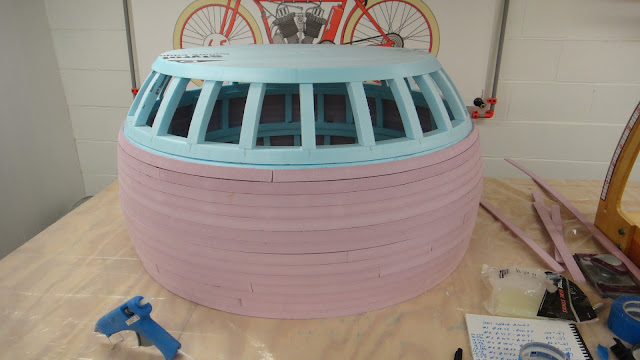 I cut the sixth ring for the third section but before I set this up on the hotwire ring jig I laid it on top of the newly assembled third section spacers just to double check that I had things fitting right.  This shot looked kind of interesting as it could be a body for a rather fat looking robot or a section of one anyway.  Just a thought I will have to remember if I ever want to put together something similar to it someday. 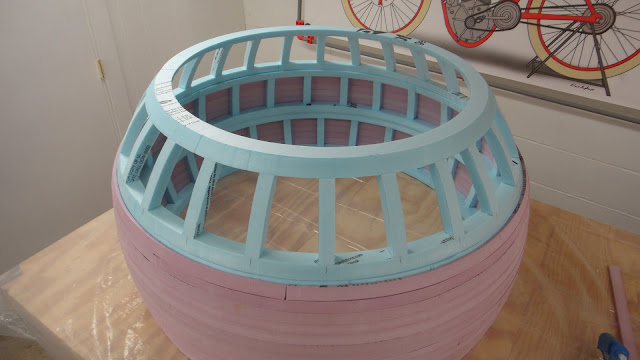 Here's the third section after I had cut the final ring for the top as you see it here. I was really pleased with the fit of this section and I am feeling more confidant that the last ring that I will need for this project will be just as easy to create with the hotwire table setup. 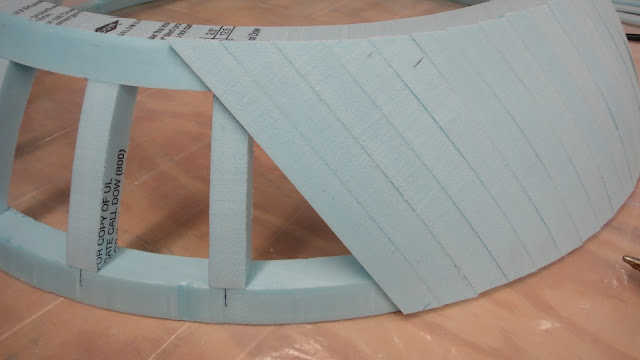 With this section I had to do something different with how I put the Styrofoam strips on it.  The curvature of this section is much steeper than the other two sections I had already built so I could not lay the strips horizontally as I had before and still get a nice smooth surface.  The strips now needed to be hot glued on at a diagonal as you see in the photo above.  This slowed my progress down considerably as each piece being around eight inches long now needed to be placed on the new section at an angle, then marked for cutting.  Then glued into place one by one. 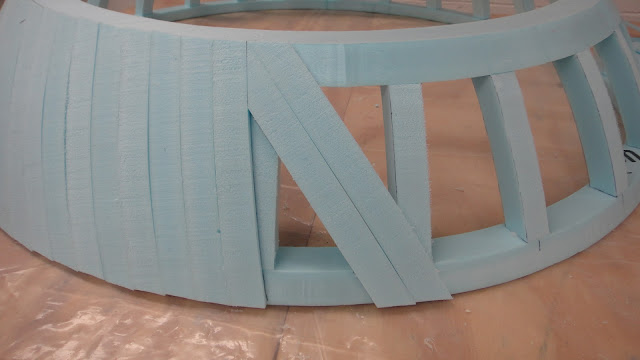 Once I had laid down a dozen or so pieces the angle reduced as I progressed.  I suspect the curvature of the assembly plus some other variables from foam strip to foam strip causes this to happen.  So when one of the last pieces in the first set of foam strips landed on a spacer and was near vertical I needed to start the process over again with a new set at an angle once again.  Here you can see the first two foam strips of the next set after they were glued onto the third section of the assembly. 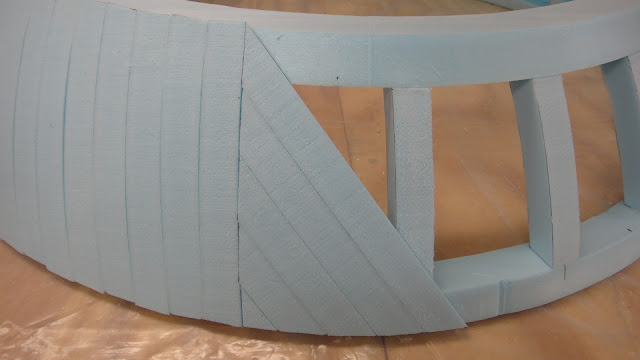 It was just a simple matter of filling in the gap with additional foam strips to get this portion of the assembly set up for longer strips as I continued around this section of the ball assembly. 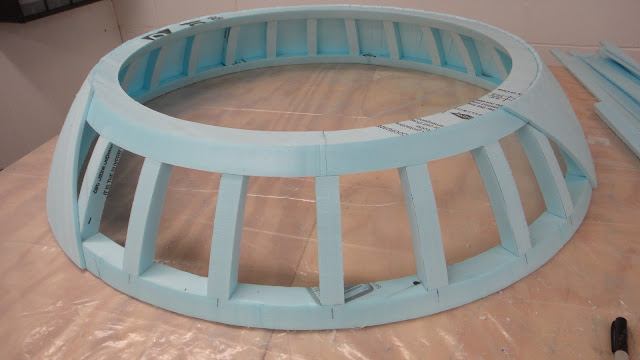 This process continued on for seven hours yesterday. I finally set my tools down and called it a day and this is as far as I got.  I had taken a stop watch and timed myself in putting the foam strips on this section of the ball.  I was only averaging one strip every five minutes.  Slow work to be sure with all the cutting, marking and fitting of these strips to get a nice even outer surface.  Not hard to do but very time consuming. 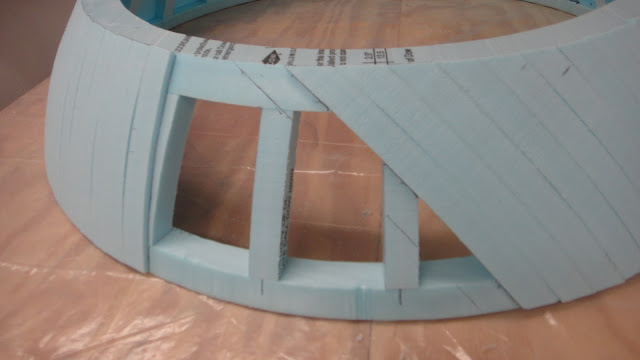 When I had gotten all the way around this section to my starting point I simply  had to start filling in the final gap from the slanted pieces moving toward the vertical strip where I had ended up. 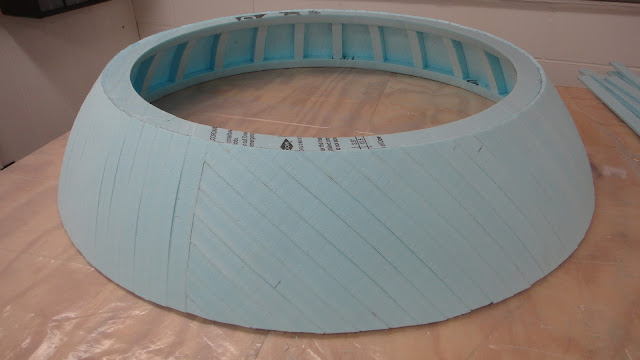 Here you can see the final layout of the foam strips for this section.  The difference in the direction of these strips really does not matter in the construction as long as I get the nice flowing curvature that I need for the each section of the ball.  Once I sand everything smooth and glass over these strips it will all work out perfectly and never be seen in the process. 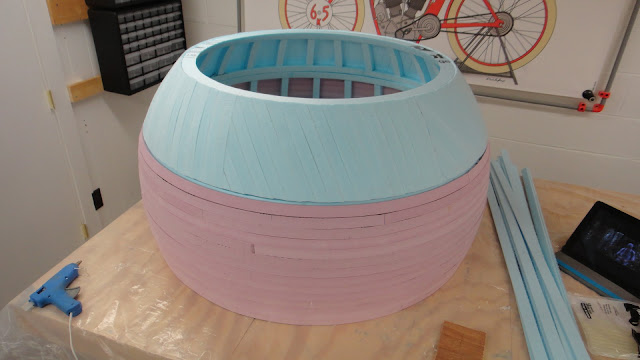 With the three sections stacked up on the work table you can see the ball shape coming together nicely.  The only reason I am now using blue Styrofoam instead of the pink is because I simply ran out of pink.  I like the blue better anyway but it really does not make a difference in the construction one way or another. 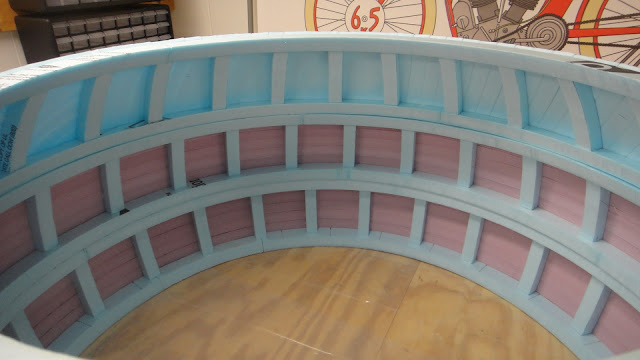 I had to take this shot as I thought it was rather interesting to see all the spacers in these first three section of the project.  It's a shame that they will not be seen once the chair is completed.  Most if not all of the spacers as well as the rings will be removed from the assembly once I have these sections fiber glassed. The foam is only there to give me the shape that I want in this project. 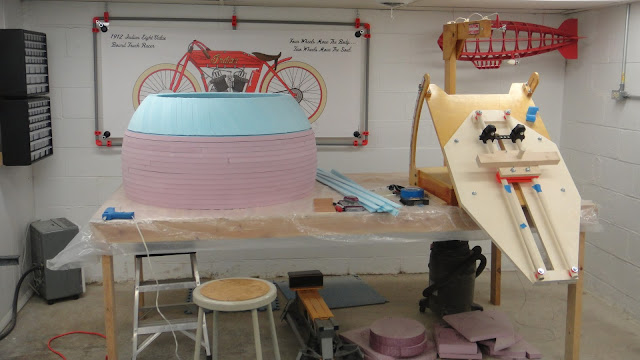 Here is a shot of the work table with the ball chair under construction along with the hotwire table and the ring/wheel jig attached to it.  The hotwire table is tilted at the correct angle that I needed for the last ring in the third section of the project.  This is where this setup has really paid off already to make this project possible.  You can see under the table more pieces of pink foam that I saved from a previous project.  Some of this probably will be cut up for parts that will need to be made for the ball chair.  The first two sections of the ball portion of the project took me 15 hours to construct.  With the third section it has taken me another 11 hours just to complete.  This being because of the different way the foam strips needed to be added to that section.
I suspect that the last section that will cap off the ball portion of this project will also take quite some time to lay the foam strip down to get it looking and working right too.  Really no problem as I don't suspect that I will be done with this project until sometime in the spring.  I'll keep you up to date with further construction as I keep plugging along and making more progress.
Posted by Dave Langkamp at 6:33 PM