This has been quite a week for me while working on this project.  There has been some nice progress with the build and a setback or two so I thought I best get this out to everyone before I forget what I have been dealing with or give up completely on the project.  Not likely in either case I as I would rather work things out and keep moving forward on the plane to complete it. 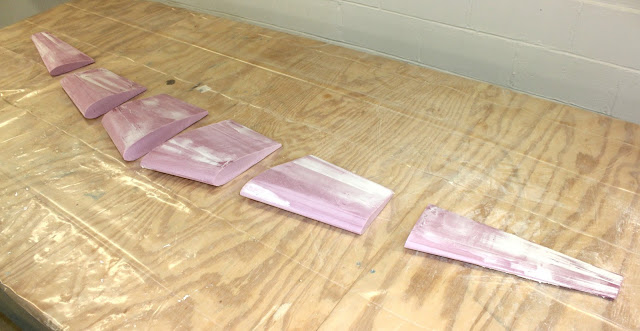 For the progress this week I have manage to get the wing of the model pretty well prepped for final sanding.  The flaws that I found after cutting the wing have been either sanded out or filled in with the white colored micro-balloon epoxy mixture.  A very light substance that I mixed up for this and for all my fiberglass projects.  I will have to sand the wing one more time and then I will have to figure out if I am going to do any covering over the wing for the glider tests that will follow.

This side view of the fuselage shows the different sections that will have to be 3D printed to build it. At the top of course is the canopy.  Then starting on the left and moving to the first vertical line is the nose of the fuselage and then three more sections ending with the tail section. This was done this way simply because I do not own an industrial sized 3D printer.  I can make some rather large 3D prints such as the canopy in one piece which by the way is 8 1/2 inches long but the entire fuselage put together comes up to 16 1/2 inches long.  Far larger than my 3D printer can handle so this is the plan of action for the 3D printing part of the project. 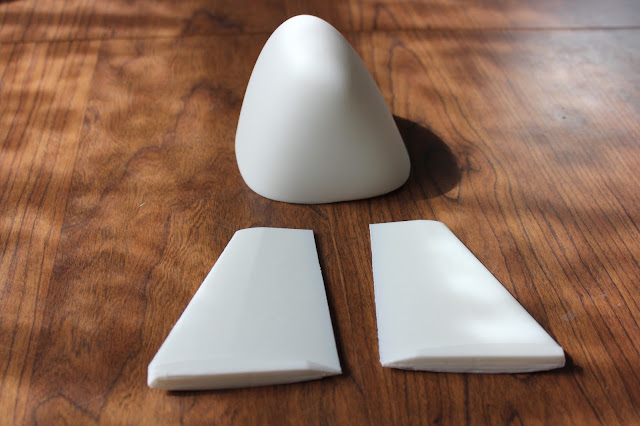 I also managed to make some really nice 3D printed parts for the project as shown above.  The top piece is the nose of the fuselage.  This I sanded smooth starting with 120 grit then moving on to 600 grit for wet sanding and then another round of 800 grit also wet sanding to give it a very smooth and uniform surface.   Below the nose are the two wing tips for the plane.  These I did not need to be sand at all as the are plenty smooth and will work out perfectly.  The nose of the plane took four hours to 3D print and the two wing tips took an additional three hours total to make.  Not out of the ordinary as 3D printing large parts takes a bunch of time.  The nose is 3 1/2 inches tall and the two wing tips are 3 1/4 inches tall. 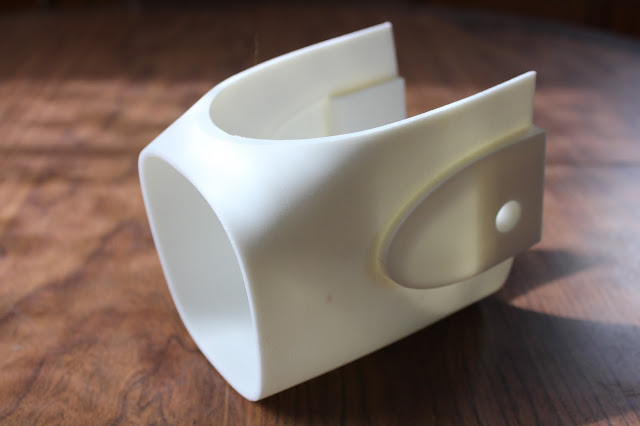 Here is the second section of the fuselage.  I am very please that this part turned out as well as it did as it is one of the key pieces to mounting the wings.  You can see the first portion of the airfoil on the side of the fuselage with a hole going through it.  This hole along with another one in the next section will allow the wing to be attached and removed when I am transporting it.  The wing having a span of 68 inches makes this a necessity.   The wing will have wooden dowels that will match the mounting holes and then be locked together inside of the fuselage. I have a plan for that when the time comes.  This being another large part  being 4.5 inches tall, 4 inches wide, and 5 inches long took 9 hours to 3D print.  Again I sanded it smooth to prep it for final assembly to the rest of the fuselage. 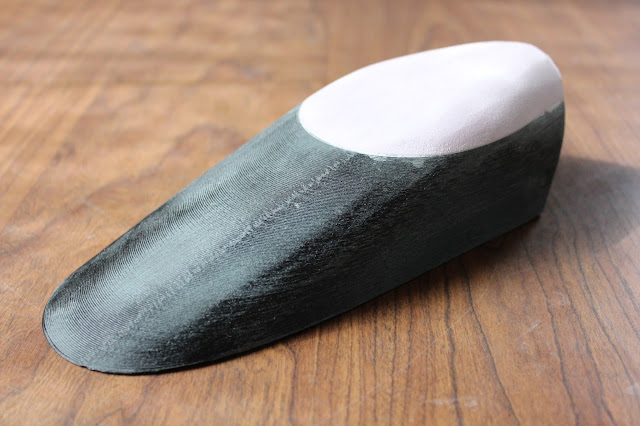 Now on to the setback and recovery of the project so far.  Pictured above is the bubble canopy that will be on the plane.  It was to take five hours to print this large part and be totally black and pretty in the process.  I was not so lucky with this 3D print.  Four hours into the making of this part my 3D printed decided it had enough and stopped printing. Auggah!!!!!!   So now I had a windshield instead of a bubble. What caused the failure was a clogged drive wheel for the extruder.  It happens.  Not that I like it but it happens.  Any easy fix and I am 3D printing once again. 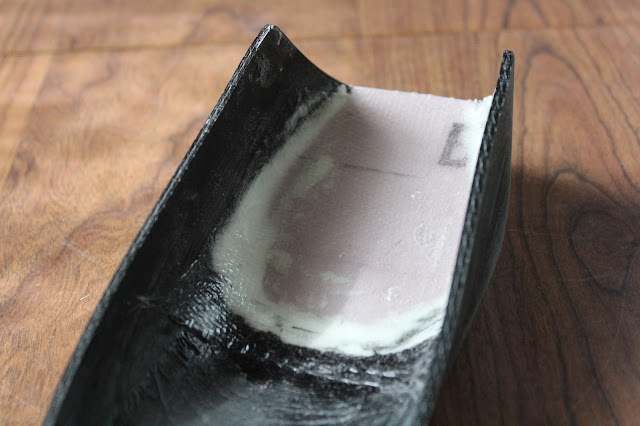 I shifted gears and last night epoxied and fiberglassed a small piece of Styrofoam to the failed 3D print.  It was a shot in the dark to try and save this part and not have to try and print another that would take an additional five hours to complete. 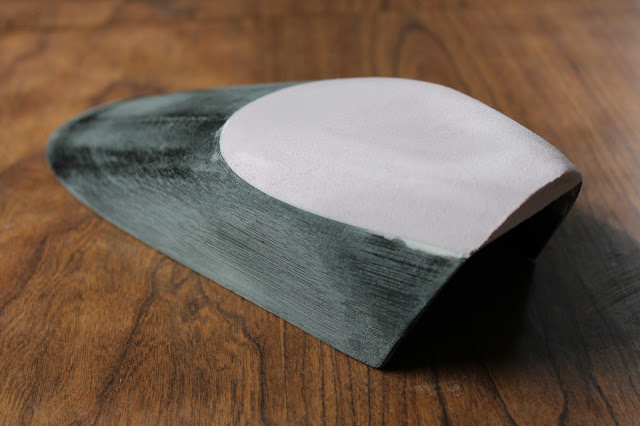 With some careful trimming and sanding I was able to resurrect the part and save it from the trash can. With the shape of the canopy pretty well formed already it was only a matter of a few minutes work and I was able to save the part.  I will then fiberglass the exterior completely with a couple of light layers of fiberglass cloth and then sand and smooth everything as I had originally planned.  I think the weight will not be a factor as the foam and glass combined will give me the shape but not add to much more weight to the part. 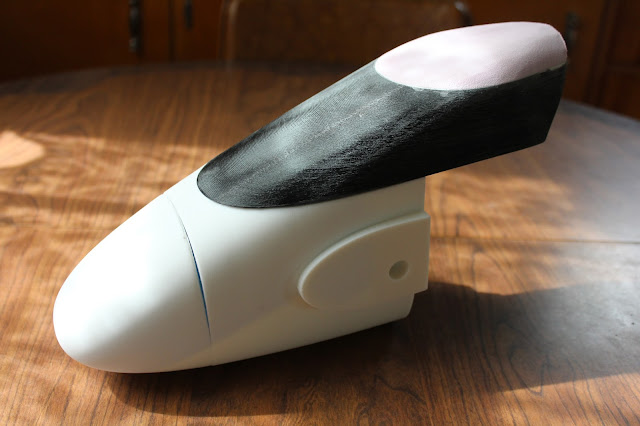 I had to tape the parts together to give you a good photo of how the fuselage will look for real if only the front section can be shown so far.   I will fiberglass all of the parts together once everything has been 3D printed.  All except the bubble canopy which I plan to make removable.  This will allow me to open up the fuselage to add or remove weight to it when I want to balance the plane for glider testing.  If that all works out then I will look at making it a full R/C plane with electric power.  I may have to remake the wings at that point to get the controls all set up in the plane but this will be far simpler than having to duplicate the fuselage that by the way will probably take nearly 30 hours of 3D printing to complete.  I will give you the correct number on that aspect of the project when I get that far along.  Hopefully in the coming week.  So for now the project is still moving forward and looking pretty amazing on top of it all. Only time will tell if the project will succeed or not.  Just will have to keep playing with it.

Posted by Dave Langkamp at 9:21 AM