The Mitchell U-2 R/C Flying Wing Project Has Started!

It's been a little while since I last posted anything so I thought I'd better catch up a bit and let you know what I have been playing with since my last post.  I had been thinking of several different projects over the past few weeks and finally decided to work on one that has been on my mind for some time.  Years ago I built an ultralight aircraft.  It was called a Mitchell U-2 which was a flying wing.  A lot of people at the time asked me if it was a kit.  I told them if a pile of wood, some tubing, wheels and an engine was a kit than that what it was.  Not to mention a ton of fabrication and a lot of luck to even complete the project. But it was a very rewarding project just the same. 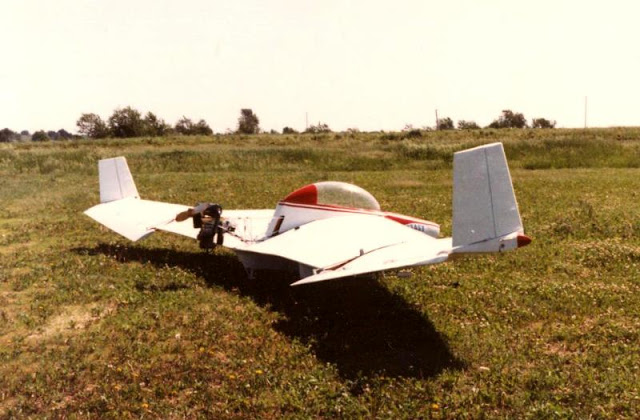 Here are a couple photos of my plane.  It was a massive project and I am proud to say that I built it by myself.    This was quite some time ago when I built this.  (1982-1983 or somewhere around that time).  That brings us to today.  I thought it would be fun to build another plane like the Mitchell only much smaller.  I thought a replica of the Mitchell U-2 would be fun to recreate as an radio controlled electric model. 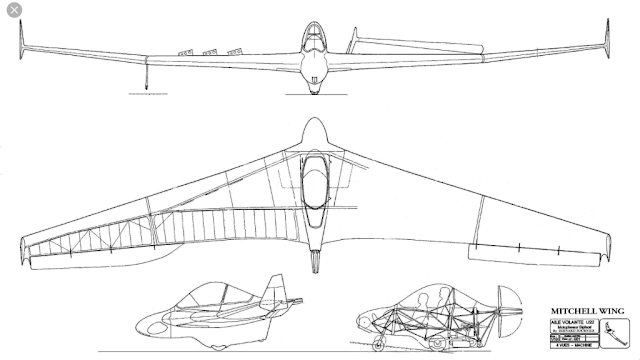 As is usually the case with the projects that I build I start by doing some research and designing the project in my computer. This was the only image that I could find online of the Mitchell Wing that was of any use to me.  It is a good drawing to start with so from it I was able to create a 3D model of the R/C plane and begin working out some of the design.

The image above is what I have come up with for the project of the Mitchell U-2 electric R/C plane.  As I stated earlier the original plane had a 34 foot wingspan.  I wanted the model plane to have a good size which I thought would be simpler to create and also not have to deal with very small parts out on the wing tips.  The plane that I plan to make will be 1/6th scale.  This will reduce the span down to 68 inches.  Still quite a large plane but this will give me lots of room for the radio gear, servo's, electric motor, and battery in the fuselage.

The servo's for the plane need to be mounted into the outer portion of the wing to be able to activate the rudders at the tips along with the elevons. The elevens are the pieces that extend out past the trailing edge of the wing to have control like an aileron and an elevator on a conventional plane.  Only both functions at the same time.

This will take some planning for sure as it has been some time since I've done anything with radio controlled planes.  I was able to create the 3D model and from it them start making the templates to create the wings in Styrofoam.  The image above shows the wing in blue and white.  Actually each side of the wing will be built in three sections. A white inner wing, then the blue middle section, and finally another white outer wing.  If you look at the image above you can see three differently shaped sections of the wing.  From these sections I started printing out templates for the various shapes of each wing end. 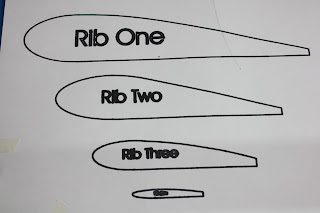 Here is what the ribs looked like once I had plotted them out full size.  The top rib (Rib One) is 11 inches long and the smallest rib (Rib Four) is only around 2 1/2 inches long.  This short rib is used at the very tip of the wing. 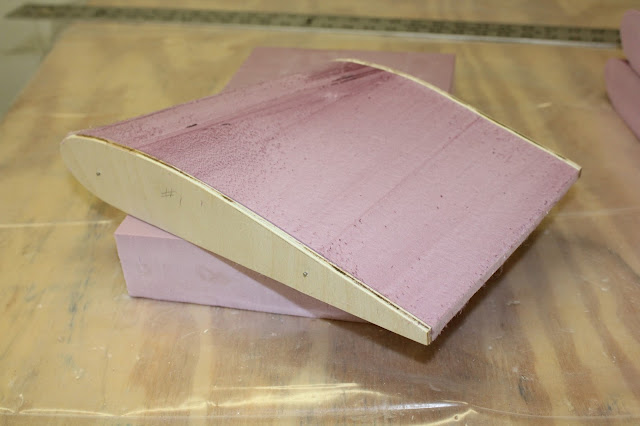 I then took the paper templates and transferred them on to 1/8" plywood, cut them out on my band saw and temporarily attached them to 2" thick pieces of Styrofoam.  The wooden pieces were then used as guides for my hotwire table so that I could cut out the inner most sections of the wing for the plane. 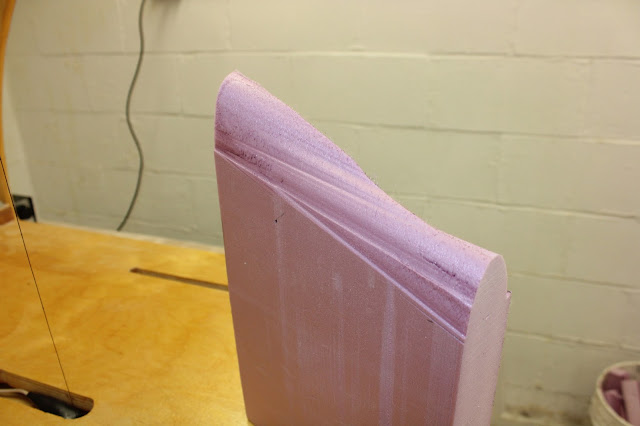 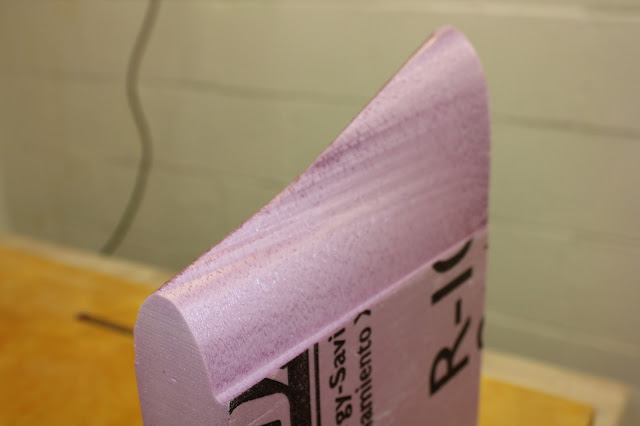 These were a couple of first failed attempts at cutting the Styrofoam with the plywood guides and my hot wire table.  The trick was to start the cut at the same angle as the leading edge and then work my way around to the front of the wing.  I had more than enough scrap 2" Styrofoam sitting around in the shop from other projects so this was a good project to use it on. 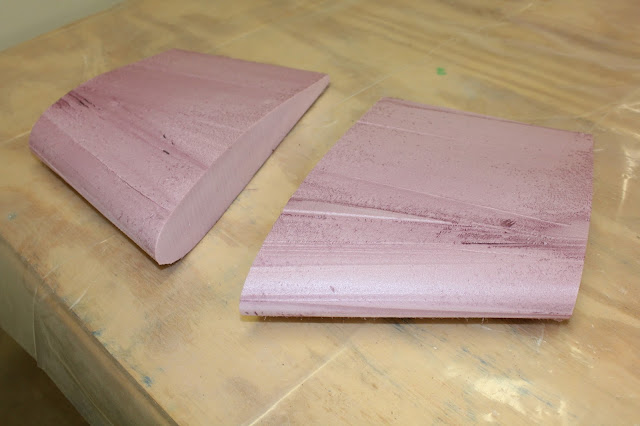 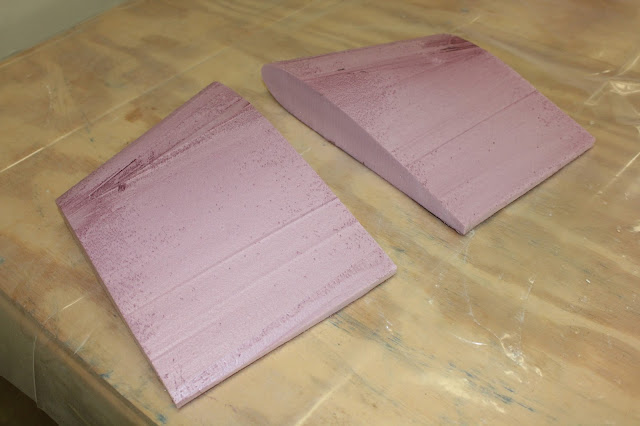 After the first couple failed attempts at cutting the foam sections I got the process down to where with careful planning I had achieved near perfection on the shape of the first section of the wing.  As you can see the number one rib and number two rib templates gives the wing a very different look as to compared with a normal straight wing where the rib pattern is all the same across the wing. 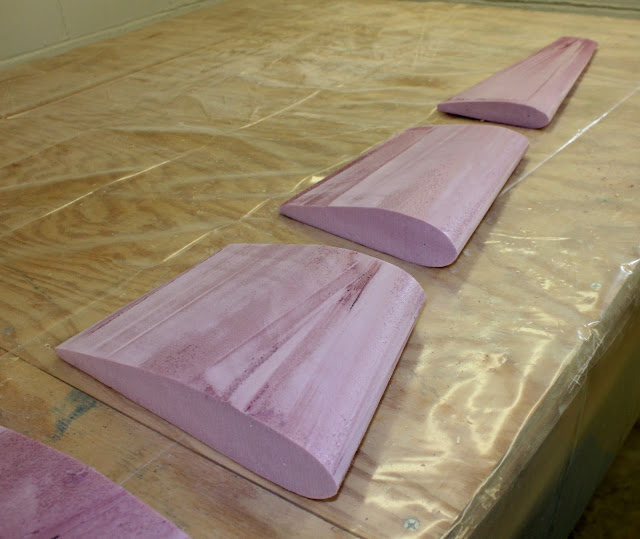 Here all of the wing parts have been shaped using the rib templates for the left side of the wing. Pretty impressive so far considering the wing has a long ways to go yet.

Here again is another shot with all of the major wing parts that I have completed.  At this point I will start sanding any imperfections that I have in each section of the wing and filling in any voids using a micro-balloon and resin mixture.  Then more sanding will be the order of the day to get the wings perfectly shaped the way I want. 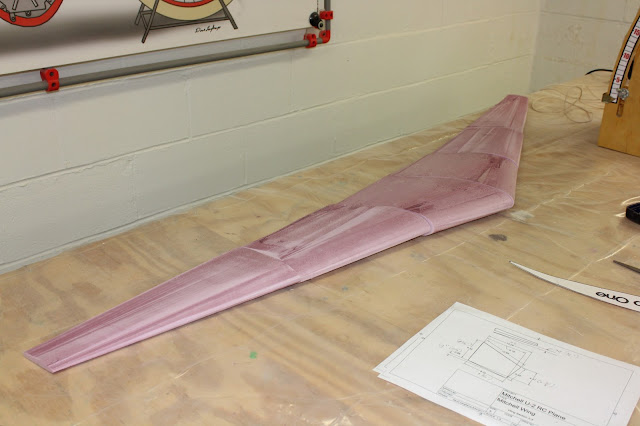 I had to slide all of the pieces for the wing together to check and see how close I was to that actual dimensions that I had designed on the computer.  The wing above measures 64" exactly.  This is perfect as there is no fuselage built yet but I do know that it will be 4" wide so this will give me exactly 68" as I had planned.

One other thing that I had to plan for while cutting out the Styrofoam for the wings was the dihedral that is designed into the wing for stability.  This took some carful planning in the cutting of the blanks for each section of the wing along with correct placement of the wooden rib templates.  From what I can see I think I have this worked out.  Just will have to see once I start test flying it.

The fuselage on the plane I had originally thought I would make out of fiberglass.  But after looking at the assembly in the computer I changed my mind and thought I would try and 3D print it instead.  The fuselage is 16 1/2" inches long, 7" tall and 4" wide at the widest section.   Quite large but I have it laid out in the computer and with some fancy cutting and splicing together of the 3D printed parts I think it is possible.  I'll give it a try anyway.  I printed just the nose section so far and that alone took four hours.  The next section going rearward looks to have to take nine hours+ so it will be a bunch of hours just to make the fuselage.  I'll keep track for sure on this part of the build.

To also work out some of the bugs that I will come across in the design the first plane will only be a glider. This way I can figure out the weight and balance of the plane and then later upgrade it so that the glider will then be radio controlled.  If that all works out then the final version will be a full electric powered motor glider.  So step by step.  I'll post more as I get some if not all of the parts for the fuselage 3D printed and put together.