Major parts of the ball chair were completed late yesterday so I thought I might as well let everyone know with this post how it all turned out.  The six wedge shaped pieces that make up the interior of the ball chair needed be covered for that part of the project.  This was a major undertaking as I had done some upholstery work but never on something as odd shaped as these wedges.  I had posted some progress on this process in an earlier and so I was more than happy to finally calling it done. 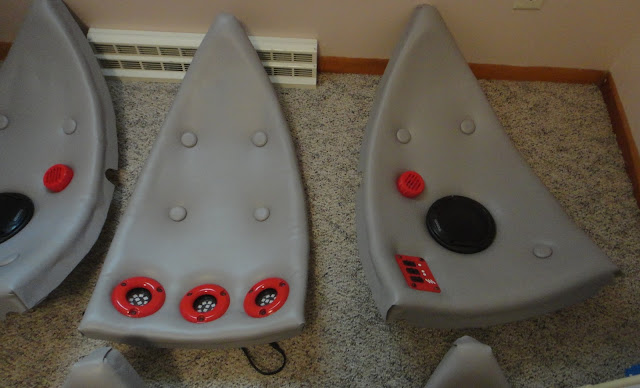 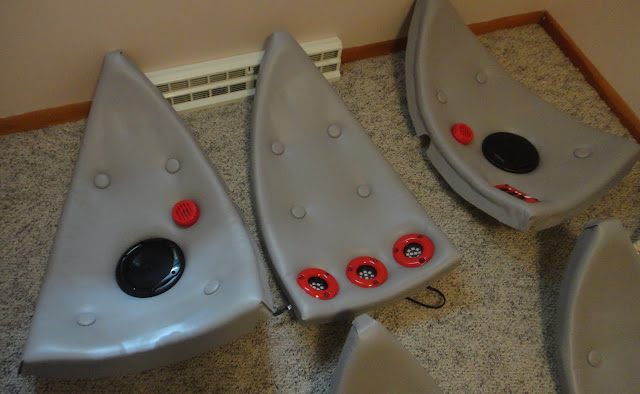 Here are three of the more interesting wedge panels that I completed late yesterday.  The upper photo shows the light panel with three LED light assemblies already mounted along with four vinyl covered buttons to pull the interior of the wedge down into the curved shape.  The other panel shows the control panel, speaker and ventilation assembly mounted into the panel along with several more covered buttons.

The lower picture shows the previous two panels along with the mating speaker panel also completed.  The buttons for each of the panels was a major struggle to assemble themselves as they are a fussy assembly to put together especially when trying to cover them with vinyl instead of cloth.  The buttons are 1 1/2" in diameter and work very well with the wedges.  I had to make a template that I could lay over each of the panels so that I could get the buttons uniformly positioned on each panel. If the panels had nothing on them other than these buttons there would be six needed for that panel.  This only happened on two of the six panels.  If I tried to put six into say the panel with the lights it would have been impossible simple because the lights and buttons would be in the same location.  It all worked out in the end and I'm happy for the result and the fact that this portion of the project is completed. 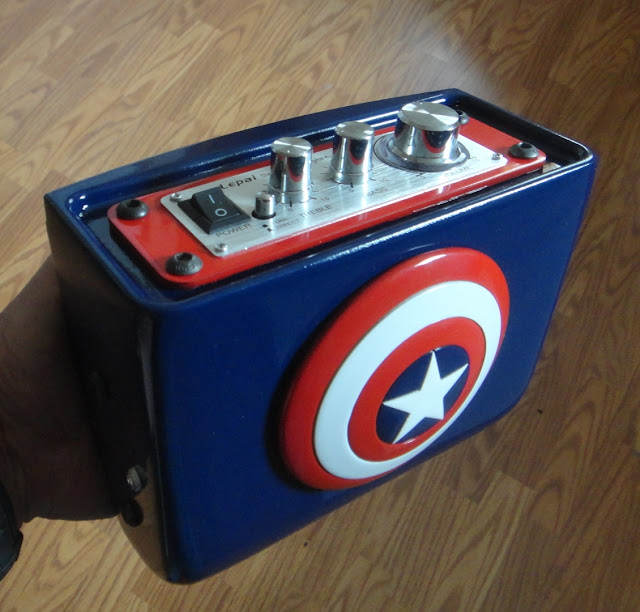 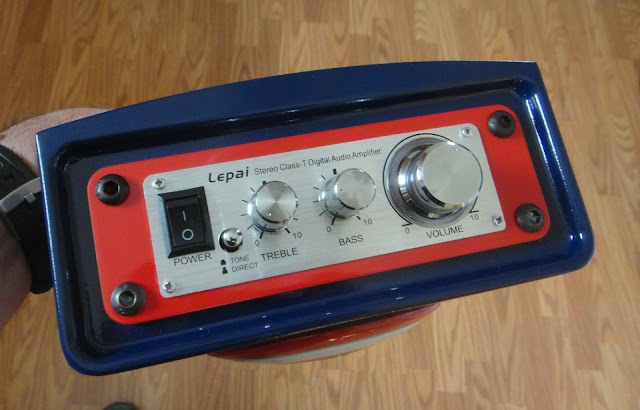 While I was waiting for glue to dry on the assembling of the upholstery to the wedges I went ahead and put the amp into the housing I had completed last week.  I am very pleased with the fit and finish of the this assembly.  The amp slid into the housing very easily along with the mounts and face plate.  The only thing I needed to change with this assembly was the hardware to mount the housing to the ball chair wedge it will be located on.  The original hardware only worked if there was no padding on the wedge.  Once padding and vinyl had been installed this moved the housing farther out from the wedge when it was mounted.  It was a simple task of just installing longer bolts to eliminate this minor problem. 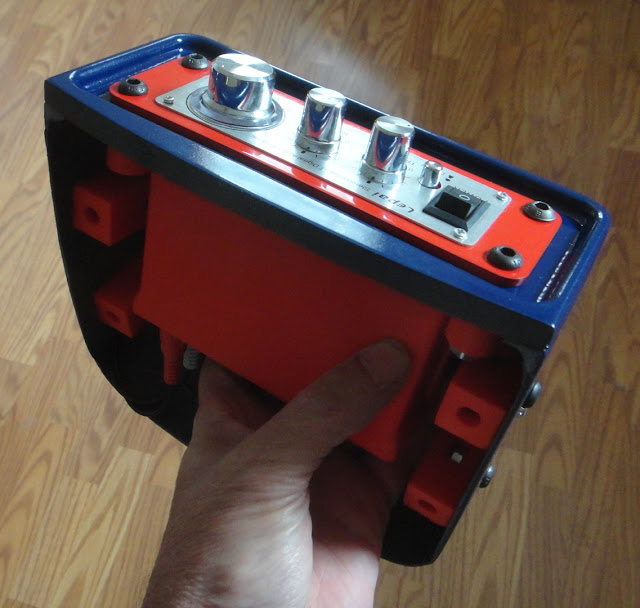 Here from the back of the amp housing I am holding the amp itself which is flanked by the mounting hardware on either side of it.  This allowed the housing to be mounted without any ugly looking hardware on the outside of the outer case.  Another happy result of planning on the computer before construction began.

With this portion of the project completed I can breath again as it has been a long process to get the six interior panels completed and be able to move on to final prep for painting of the chair.  I will get back to this in the coming days and hopefully will have the painting done in the next couple of weeks at most.  That is the plan anyway.

Current hours have come up to a total of 428 at this point. I suspect that I will be looking at right around 450 total hours to complete the chair give or take a few hours.....I hope.  At least now I can get back to working outside and not have to completed another six parts that are exactly the same.  That gets to be a bit boring after about the third part or so. Once I have painting completed and I am happy with that effort I will be looking at final assembly of the ball chair.  Should be quite interesting to finally see the chair all together complete with paint, upholstery, lights, ventilation and sound.  I'll let you know as soon as I get that far along.  Have a good one.

Posted by Dave Langkamp at 9:04 AM