Today in this section of the motorcycle cargo trailer project we will look at the mounting of the lid for the body, rear bumper mounting, lid latches and protective undercoating of the body. 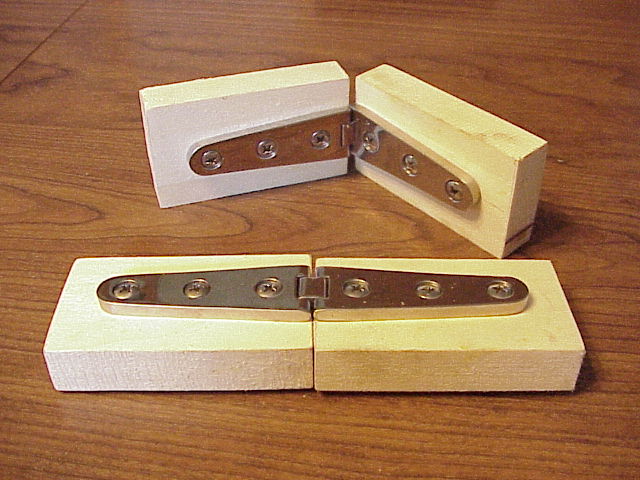 The lid hinges here are mocked up on wooden mounting blocks.  I found the hinges online at a supply house that handles parts for boats.  I thought that if it could stand being on a boat it would work well on the trailer.  Less likely to rust. 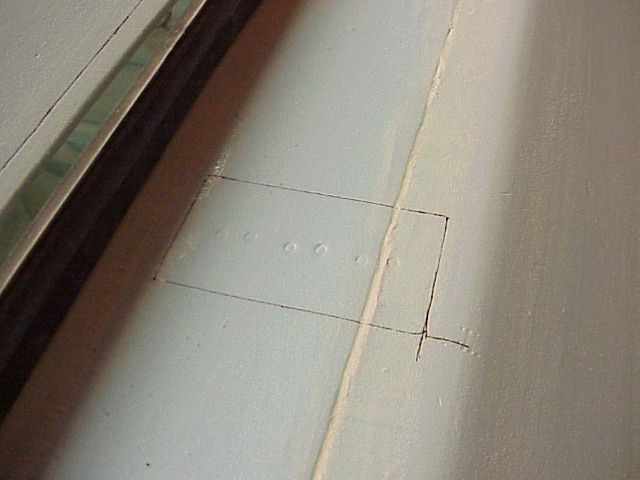 The area for cutting is laid out on the one the foam surface of the body of the trailer.  The two locations for the hinges is where the additional panel was added at the front of the trailer body opening. (see earlier post on this panel placement) 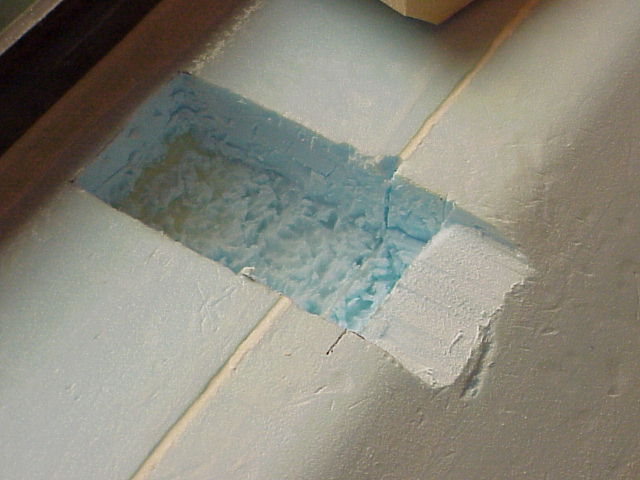 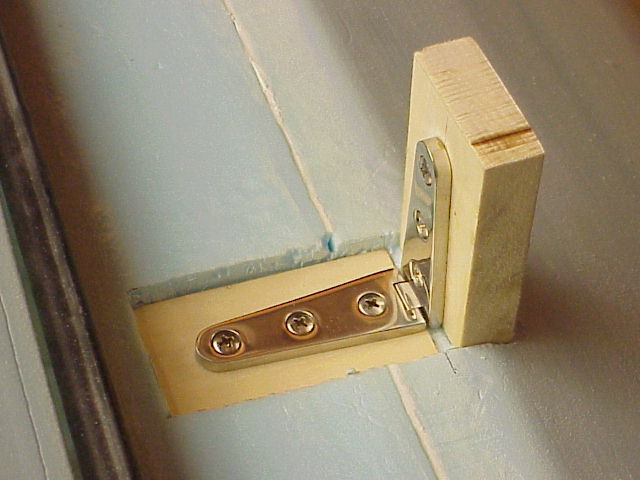 The front hinge is test fitted into the new opening to make sure everything looks and works right. 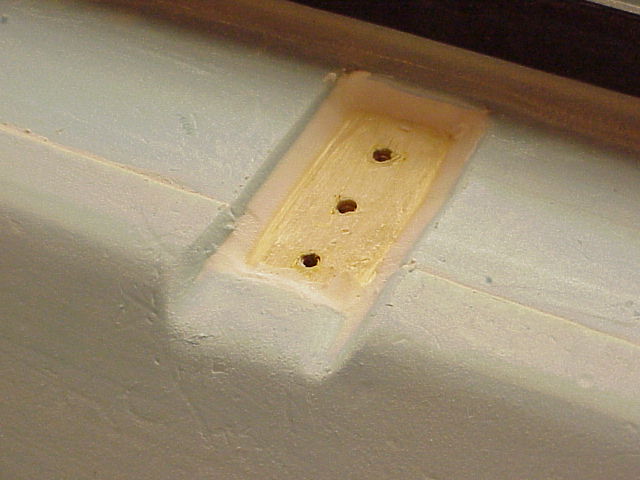 The hinge is removed and only the lower mounting block is puttied into place using a resin putty mixture.  This mount once it has cured will be totally glassed into place to seal it completely from the elements. 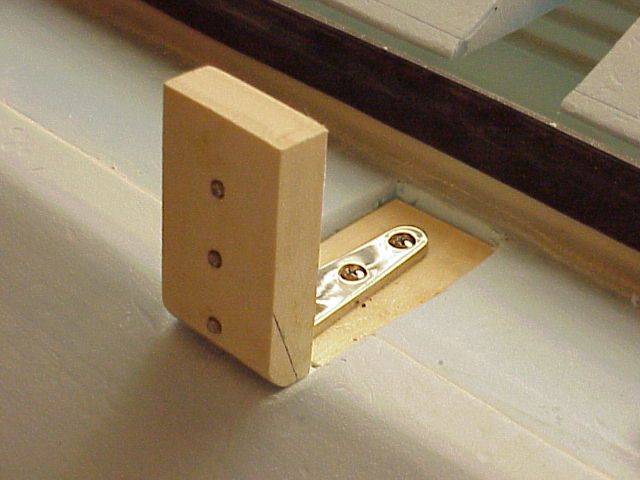 The hinge and upper block are reattached once again to check alignment and clearances. 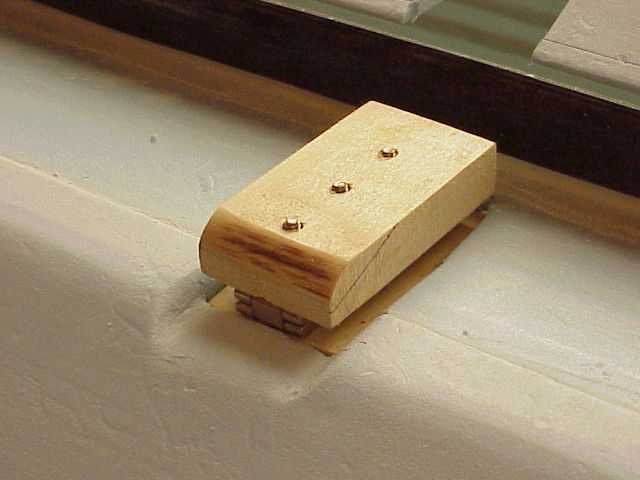 Here one of the hinges is closed and shaped to work out how the mount will look when done. 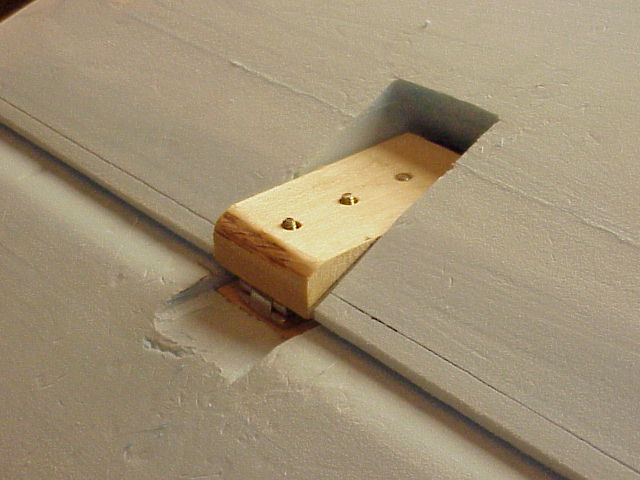 The lid of the trailer was put in place just to see where I was headed with the hinge mounts.  This was a trial and error kind of thing to work out.  As I was experimenting a this point to figure out what would work and look good all at the same time. 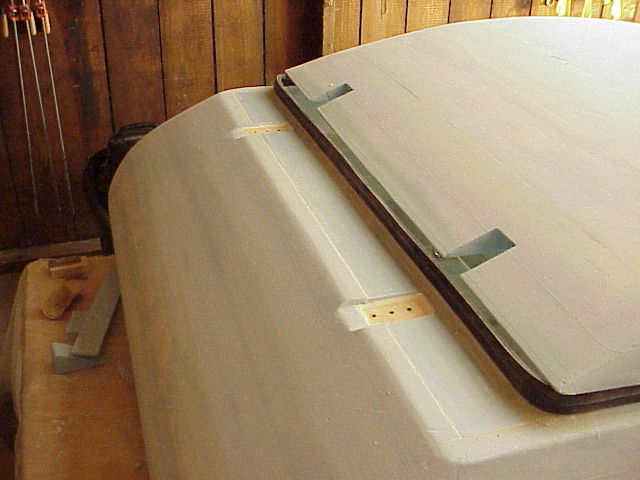 This is a good view of the hinge mounts that are glassed in and cutouts on the lid. 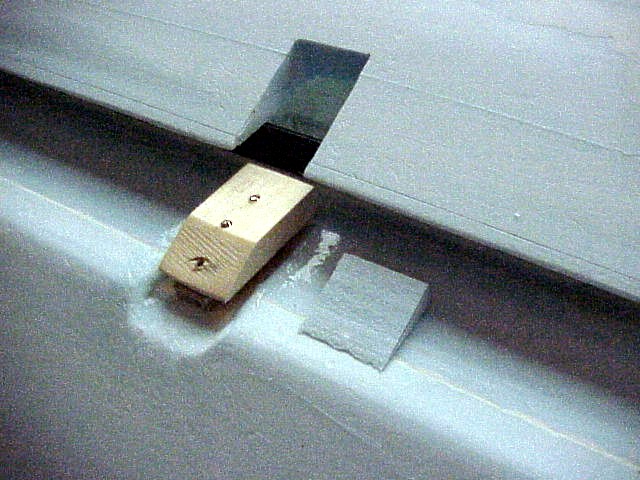 The upper hinge block is now cut down to match the angle of the top lid surface and a small foam wedge is sitting alongside to fill the upper void. 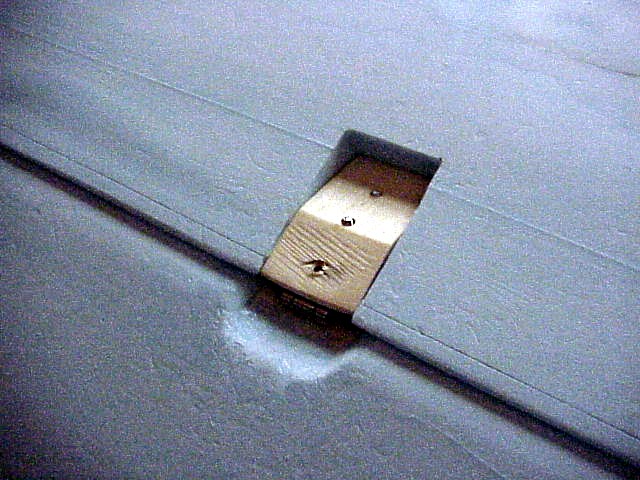 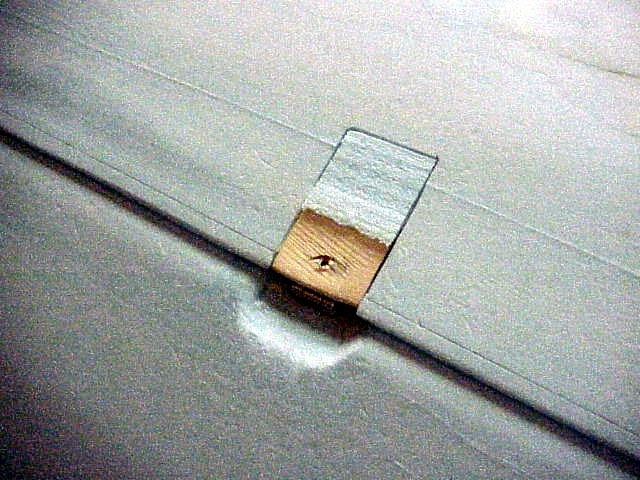 These two photos show the lid in place over the upper hinge block without the foam wedge and with it in place. 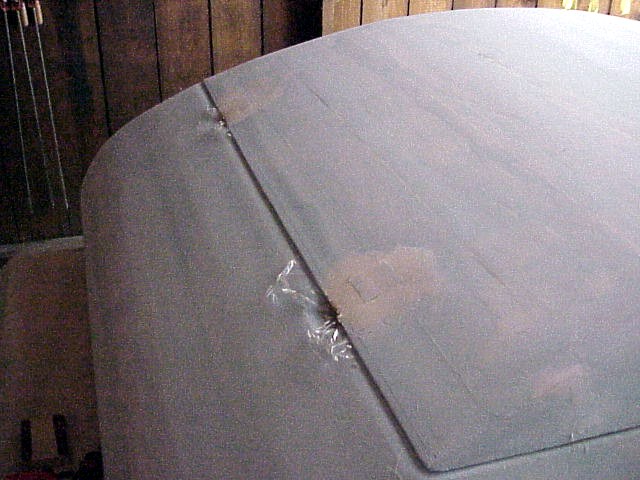 At this point the hinge assembly is covered with plastic film so that all the upper wooden block and foam wedge can be bonded into place using fiber glass resin putty.  The plastic film is resting between the upper and lower hinge blocks so that when I bonded the lid to the upper block it would not glue the hinge shut.  This would be very bad as it would make the assembly useless at that point. 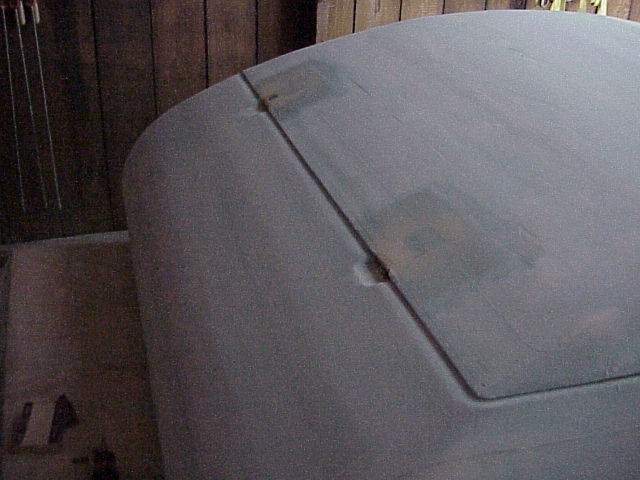 Once the bonding putty had dried it was then sanded smooth and the upper mounting block could be glassed into place for a strong, straight, tight fit.  The hinges now were in place and the lid could be removed completely by just removing the mounting bolts for the hinges.  Each of the holes in the wooden block had steel inserts in them so that if the lid needed to be removed it would not just have wood screws holding the lid on.  Otherwise over time the mountings could fail and you would have a heck of a time trying to fix or make a new hinge mount. 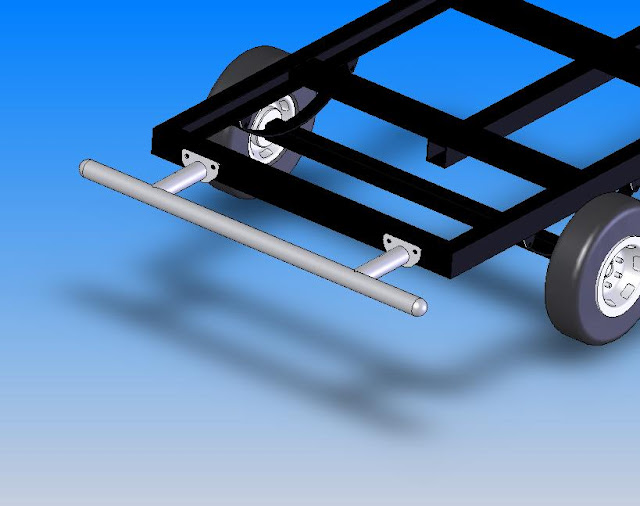 Here is a computer image of the design that I came up with for the rear bumper of the trailer.  In an earlier post I had told you that my first design of a bumper was to have it incorporated into the body of the trailer.  This was not a good idea as it would be difficult to not have the bumper damaged and then you would have to repaint the entire body of the trailer because of it.  What I did here was use a steel bumper that would mount directly on to the frame give it better structural strength and protection from damage. 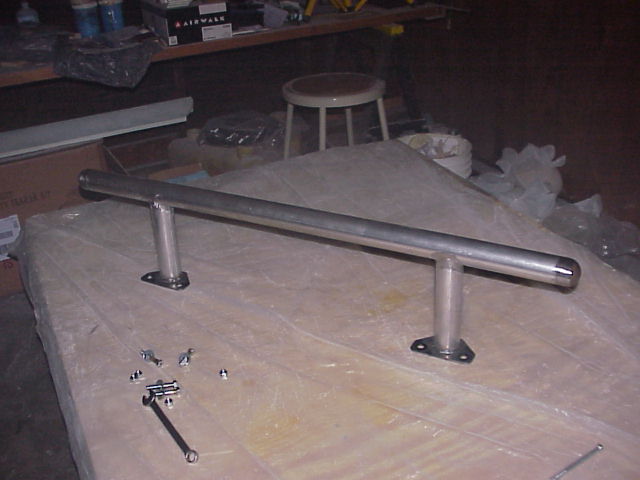 It took me some time online to find the exact parts that I needed for the end caps of the bumper.  These were hollow half balls of steel and were a real trick to find.  The bumper is made from standard muffler pipe that is cut and welded together using end plated that would mount the assembly to the frame. 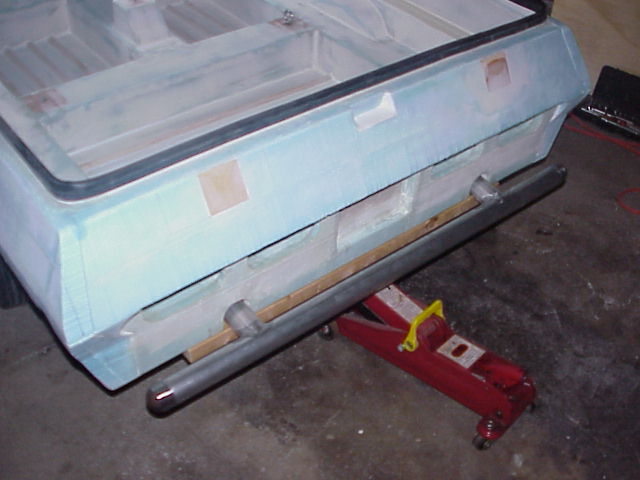 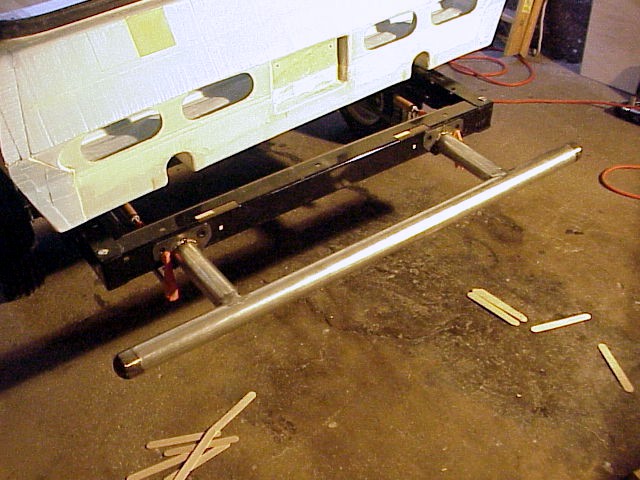 These two photos show the bumper temporarily mounted to the frame with the body in place and with it moved so that the mount could be more easily photographed. 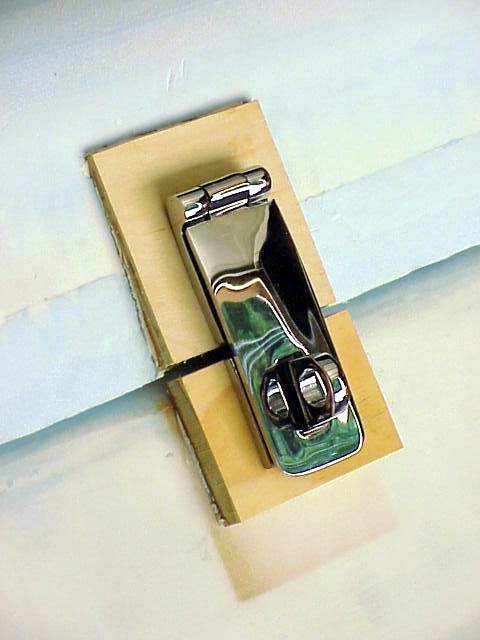 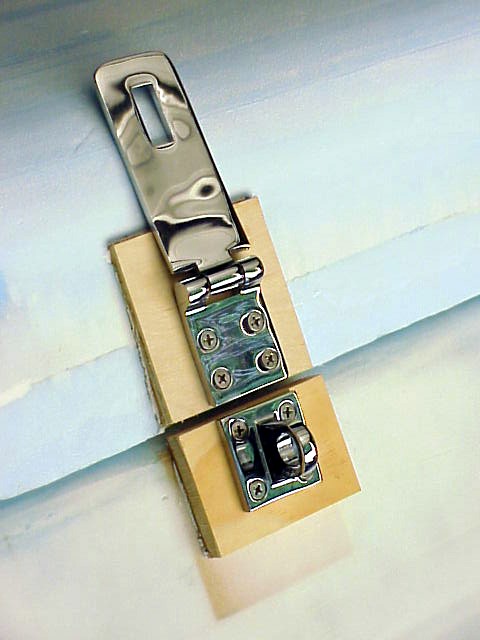 Next the rear chrome hasp mounts were created to lock the lid of the trailer down.  I struggled for the longest time trying to figure out an inexpensive and simple way to lock the trailer.  I originally wanted a lock system similar to what you would find on a car.  This proved to be way to complicated and expensive to duplicate so I came up with this idea of using two chrome hasps that would have locks on them.  Simple, inexpensive and easy to build. 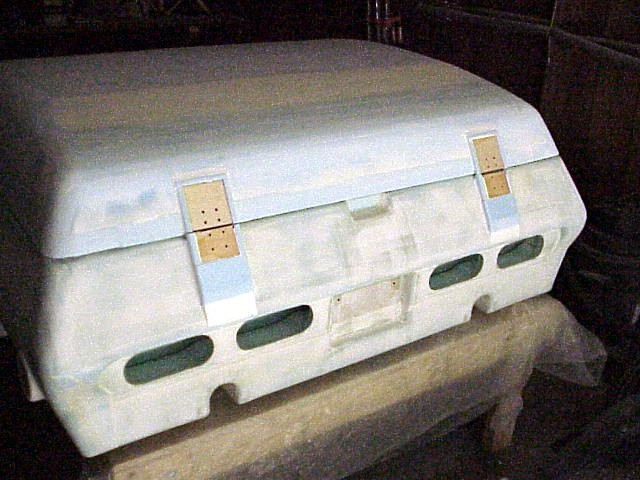 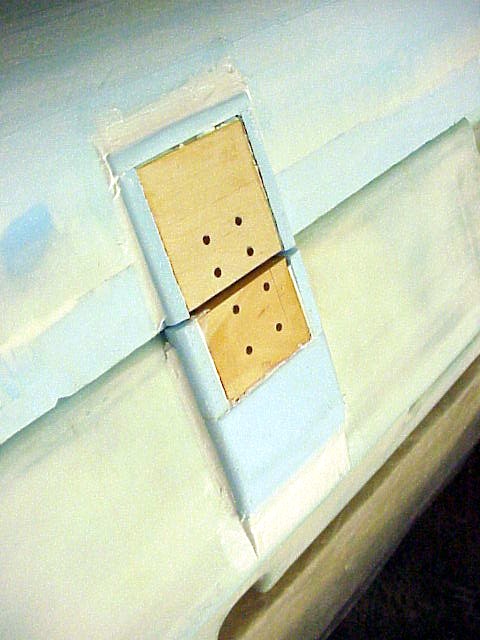 The mounts for the chrome hasps have a mounting block similar to all the mounts on the trailer with mounting holes for the stainless machine screws.  In each hole once again was a steel threaded insert so that you could have a sold steel mount that would not destroy itself over time.  The mounts were then wrapped in foam around the outer perimeter to give it a nice look when glassed.

Her the trailer is prepped with paper and tape so that the underside of the body could be painted with a protective truck bed liner material. 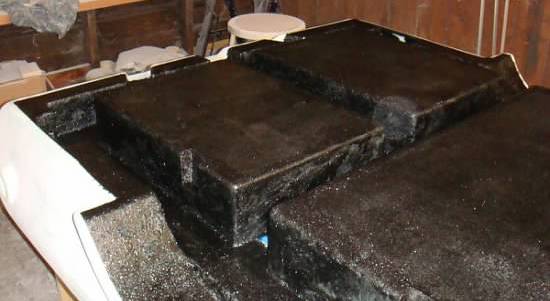 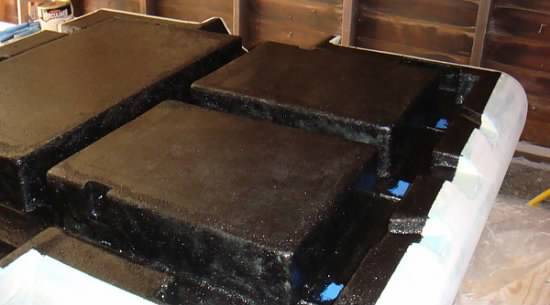 This is a black rubber compound that you roll on with a bush to protect a truck bed.  It worked out perfectly with the trailer as it gave a nice finished look to the underside of the body and protected it from rocks or what have you that the tires would toss up into the glassed fenders.  Again inexpensive and very strong so it was a great idea that worked out very well.

So once again with this installment of this project I've managed to show you some pretty complicated assemblies and simple solutions to head toward completion of the motorcycle cargo trailer.  Enjoy.