Last week I had made some nice progress with this project and I have been lucky so far again this week with what I have managed to get put together. 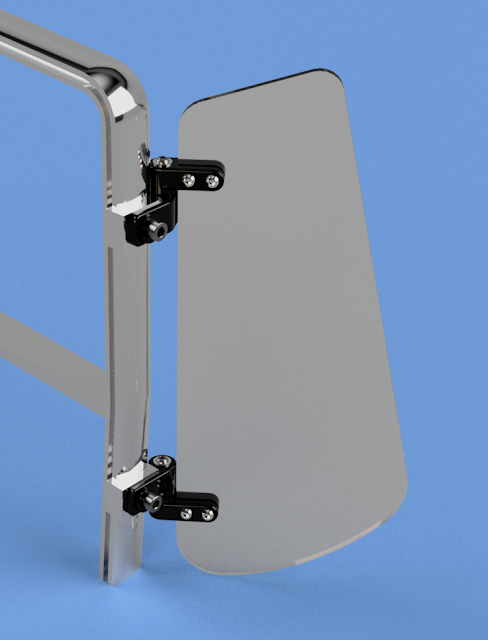 Some changes along the way needed to be done with the design simply because of the hardware that was available for the project that needed to be found and one or two errors on my part also. 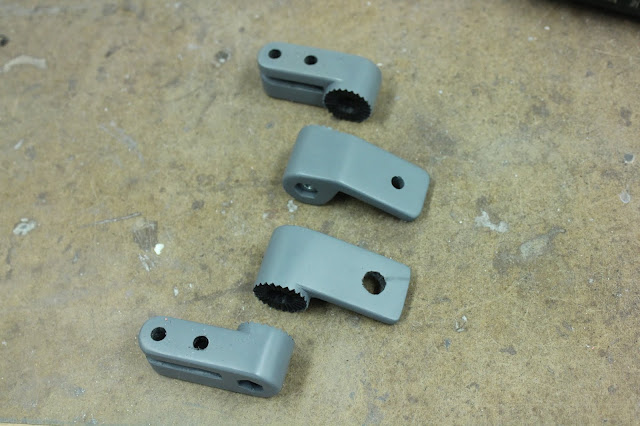 Pictured above are the mounts for the right side of the dune buggy wind deflector.  The upper and lower mounts look great but I can not say the same for one of the two inner mounts.  As you can see one has a large hole and the other a small hole.  I had missed this fact while designing the parts in Fusion 360.  Both of the inner parts needed a large hole to accommodate the 10mm bolt the holds these assemblies to the aluminum mounts.  So the upper middle mount needed to be reprinted, and painted in primer again for both sides of the deflector assemblies.  Another five hours of 3D printing not counting the sanding of the parts and priming once again. 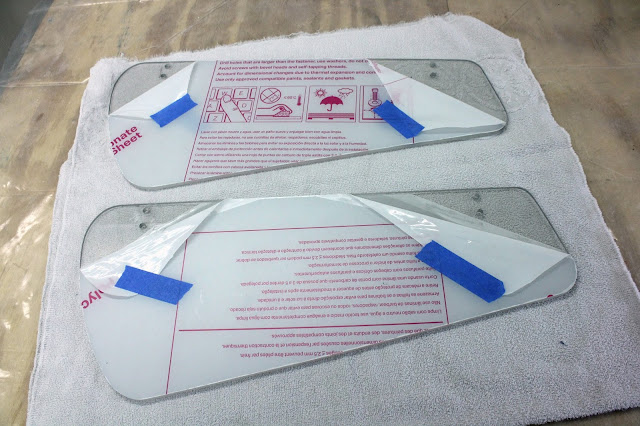 This past week the polycarbonate plastic that I needed for the wind deflectors showed up in the mail. I had contacted my local maker space and thought that it might be possible to have these parts cut out on the laser cutter that they have.  No such luck.  Polycarbonate is not something that should be cut on a laser cutter.  We tried before we found this out as the laser only would make the plastic turn yellow because of the heat along with some other issues that would not make it safe to do so in the first place.  So back to the workshop I set out to cutting the parts on my bandsaw.

I did have the foresight to buy a new bandsaw blade to do the job and was rewarded with the pieces that you see pictured above. The bandsaw blade had 14 teeth per inch and cut through the polycarbonate like a hot knife through butter.  I took my time with the cutting and was very pleased with the end results.    Also in the photo above you can see the holes for the mounts already drilled.  Another easy task using my drill press. 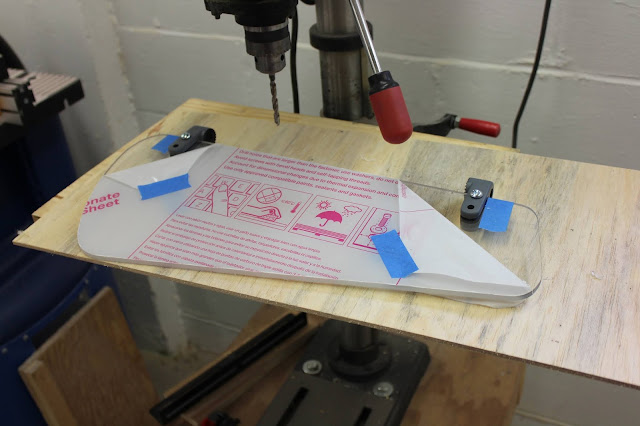 Here is one of the wind deflectors set up to have the second set of holes drilled into the polycarbonate plastic.  I took two of  the mounts that will be installed on to the deflector and carefully drilled a 1/4" hole through the mounts as a guide and then into the polycarbonate plastic.  Once I had gotten that far I slid a bolt into each mount so that the next holes that needed to be drilled would match up perfectly with the mount and the first holes drilled.  Not a difficult task. I just had to take my time and not rush the process. 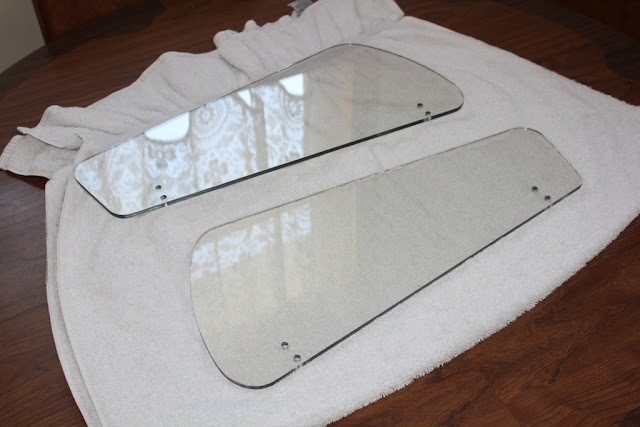 Once I had the four holes drilled into each of the deflectors my next task was to sand the edges smooth with sand paper.  I started with 120 grit, then on to 400, then 600, and lastly with 800 grit. This made the edges very smooth to the touch and cleared the edges very well.  To finish this part of the project I took a small butane torch and slowly heated up the edges to bring a nice clear finish back to the edges.  Again not a difficult task to do but one that needed to be done slowly so as to not damage the edges in the process.  This final step took less than ten minutes and as you can see the deflectors are ready at this point to be installed. 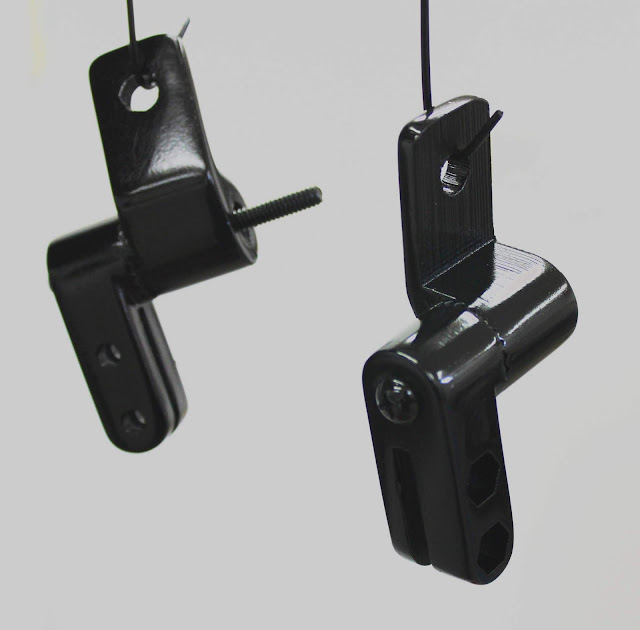 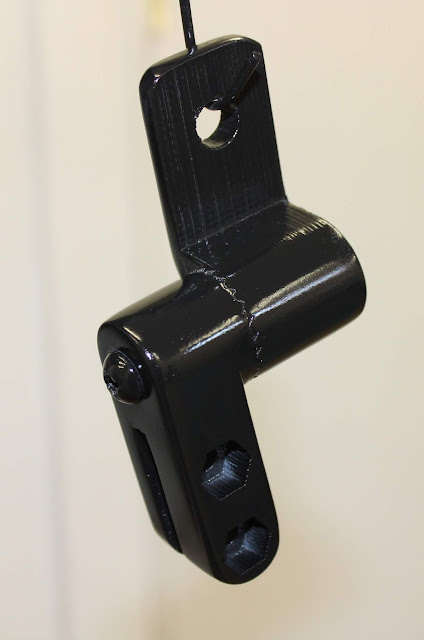 After having 3D printed the mounting hardware for the deflectors I sanded each part smooth and then painted them with primer. When I was happy with how the primer turned out I was able to finally paint the parts a nice gloss black.  I purposely assembled the two mating parts together when I primed and painted them.  I did this so that I could keep paint out of the toothed surfaces on the parts that keep them locked into position when they are mounted on the dune buggy.  I was afraid that if I had painted these surfaces that they would not fit as nicely as what you see here. 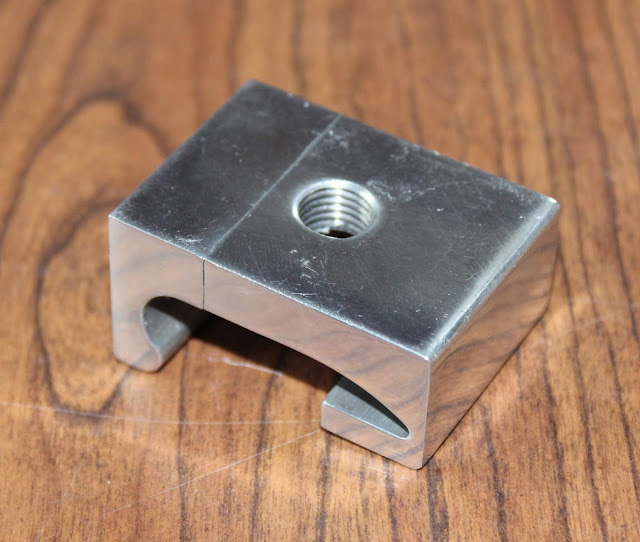 The picture shown above is one of the aluminum mirror mounts that are needed for the wind deflectors. This mounts to the windshield frame first and then the 3D printed parts are mounted to it to hold the wind deflector in place when the assembly is completed.  The 3D printed parts were printed with a 60% infill to make them strong enough for the job.  I think this amount of infill will do really nicely and should hold up very well.  I also think you would have to smack these parts with a hammer to break them so they should do the job.

The hole in the center of the aluminum mount is a 10mm in diameter with a fine thread.  It took some doing in order to find the right bolt for this portion of the assembly. I needed the right size bolt of course but I also wanted something that fit the look of the windshield and the wind deflectors. 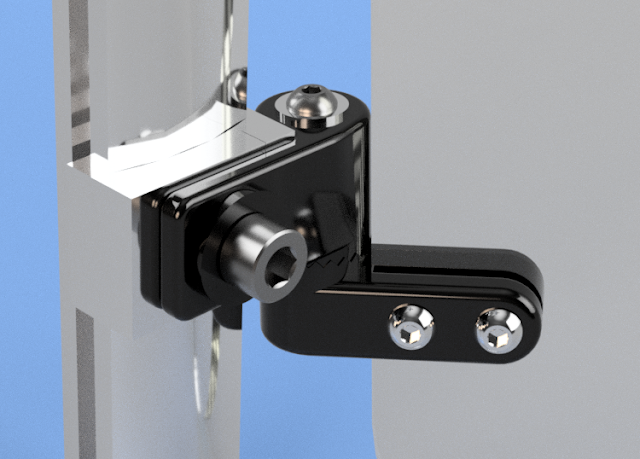 The bolt on the far left of the assembly in the image above is what I was looking for rather than a large standard bolt head.  This looks good and it took me some time to find it simple because of the size of the bolt (10mm) and it having to be fine thread along with only being 16mm or a little over a half inch long.  I contacted my local Fastenal company and at the moment have the hardware I need on order.  It will be here in a couple of days.  At that point I should be able to start the final assembly of the wind deflectors and install them on to the dune buggy.  Stay tuned for the final part of the build coming up soon.
Posted by Dave Langkamp at 9:55 AM