The last couple of days I have been varnishing the CNC enclosure part by part.  Eight doors, enclosure frame, enclosure stand, and enclosure top.  Lots of dismantling, varnishing, and reassembly.  This alone has been quite an undertaking with all of the varnishing to be done.  I ended up using almost a half gallon of polyurethane on the assembly but it has been worth the effort along with all the other details that you will see here. 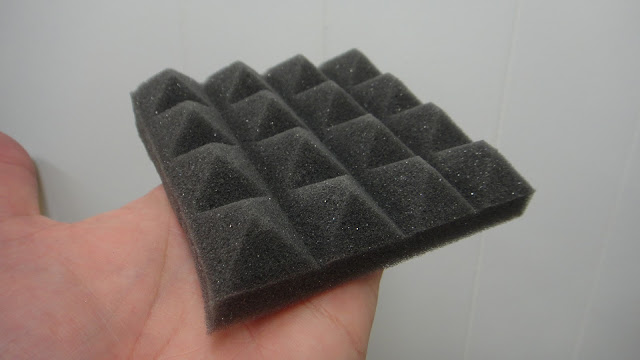 After all the varnish had dried I installed the sound deadening foam.  Here is a good shot of just a small piece of the foam.  Installing the 33 square feet of foam into the doors and top panel turned out to be the simplest thing to do in this project.  I simply laid out the one foot squares where I could and then cut smaller pieces with a scissors where they were needed to fill the smaller voids.  Once a door was set up with the foam I pulled all the pieces out and then sprayed in contact cement on the door and the foam parts. After a couple of minutes the glue had become tacky and it was just a matter of putting the foam back into it original location. Fast and easy just the way I like it. 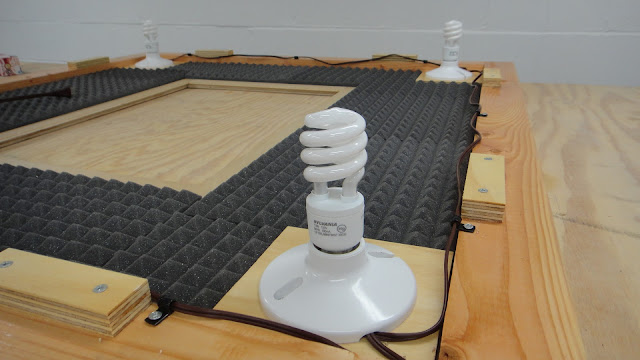 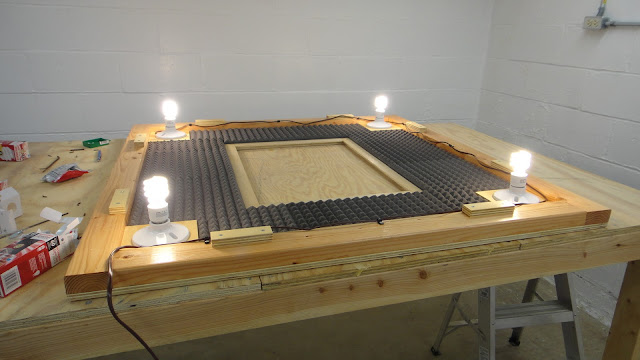 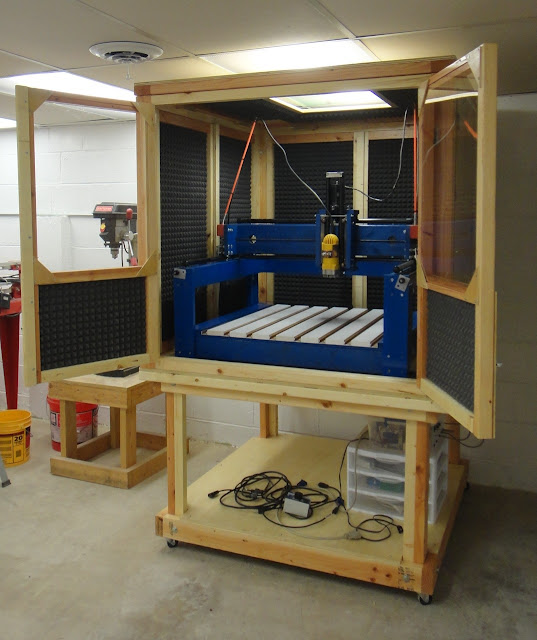 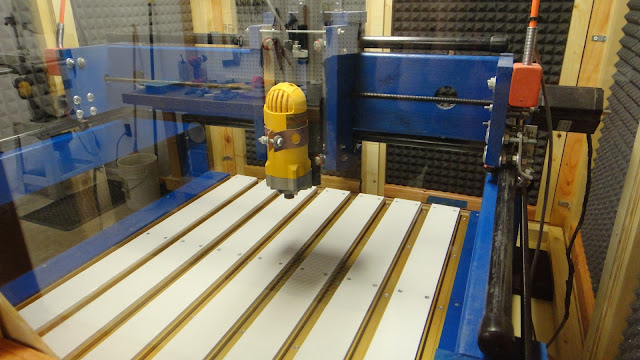 Here is a photo of the enclosure once again assembled without any additional lighting. The first thing that I noticed with the enclosure was the shadow below the router.  Not a good thing as it would always block the view of the bit cutting parts.  Also the enclosure as I suspected became much darker because of the charcoal gray sound deadening foam.  This was not a surprise. 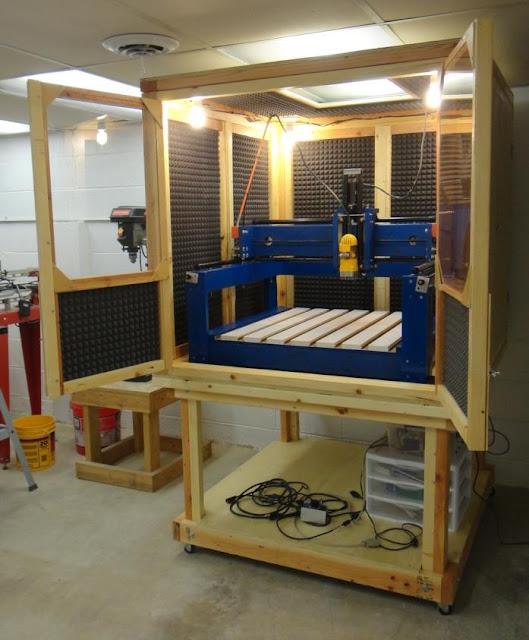 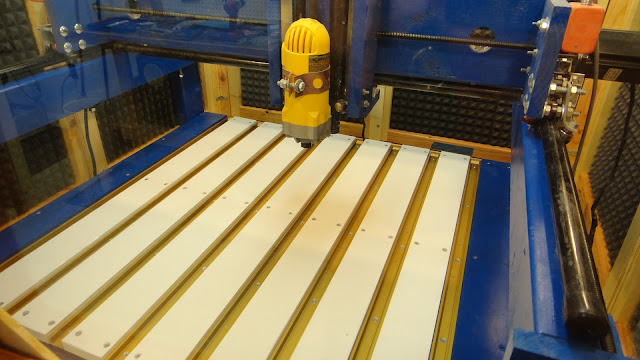 Now with the lights installed into the enclosure it is much brighter and easier to see the work table for cutting or engraving parts.  The shadow that was below the router head now is gone.  A big improvement.  The close up photo is what you will see looking through one of the front windows when milling parts.  A nice view! 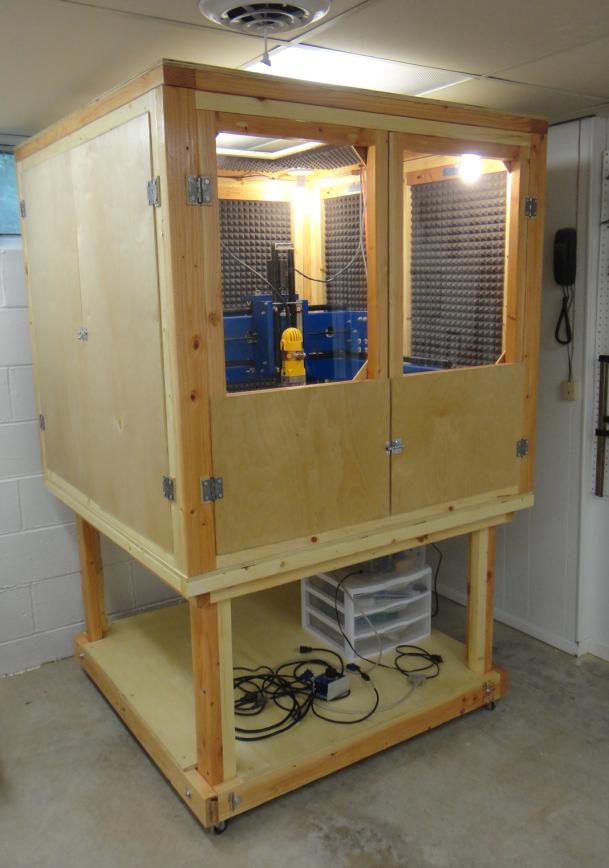 This is a good shot of the enclosure closed and lit up with the new lights.  I installed four 60 watt florescent bulbs which turned out to be more than enough lighting for the project.  Each of the lights are wired together so all are lit at one time.  The power cord plugs into a power strip for the machine and it all comes to life once a switch on the power strip is tripped.
The CNC machine now in the enclosure is a tight fit to be sure.  But I can already notice a sound difference in the enclosure just by sticking my head in to it to make adjustments to the machine.  I will put a sound meter inside and out once I get the CNC up and running again to find out how much the sound has changed because of the enclosure itself and the sound deadening foam. Should be interesting to see what kind of a difference it will make.
With the enclosure ready to be used with the CNC machine I will next put my efforts into completing the plans that are 90% done so that I can get them out on the plans page here.  I'll put together a post just as soon as they are ready.
One last thing.  The enclosure should stand up to almost anything I can throw at it.  This thing is heavy.  I thank my lucky stars that I put casters on the enclosure.  Even with them it takes a bit of effort to move it around the shop.  Luckily this is something that I will not have to do on a daily basis.  No matter what this addition to the shop will be a great to use with the CNC machine.  Enjoy the photos.

Posted by Dave Langkamp at 5:37 PM