The Scrooch Gun Project Is Born!

My latest idea for a project actually goes back to my childhood and a TV show called the Rocky and Bullwinkle Show.  On the show were various characters that I enjoyed as a kid and even more so when I became an adult as there was a lot of adult humor in the show that I never understood as a kid.  In the show there were two little characters named Gidney and Cloyd.  These guys were two little green moon men.  One of the interesting things that these characters had with them to protect themselves was a gun called a Scrooch gun.  When fired it would make the bad guy freeze until he was shot again with it to unfreeze him.  So the idea of making my version of a Scrooch gun was born one morning while I was shaving and looking at my can of shaving cream. 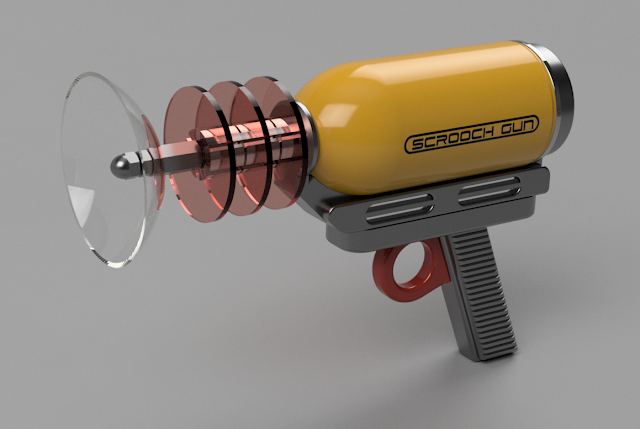 Here is a good image that I created of my Scrooch gun design.  I modeled this in Fusion 360 CAD software and have all of the components figured out on how to make it.  The yellow canister with the name on the side is actually an empty can of shaving cream.  Thus the reason why this project popped into my head while shaving.  The can had the perfect shape for this 50's style  SciFi gun so I started working out the rest of the design over the past couple of days.  The clear dome shape for the muzzle of the gun I have sitting on my desk as I write this.  I made it by cutting down half of a plastic sphere that is used for Christmas ornaments.  Next the red tinted disks I plan on cutting on a lazer cutter at the makerspace I teach at in the next couple of weeks.  This will give me time to get the materials together for the disks. The remainder of the gun will be 3D printed in my shop and various bits of hardware will need to be collected to put it all together. 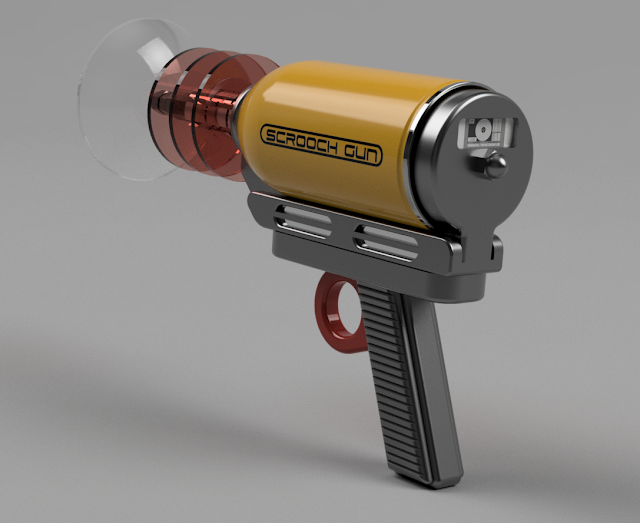 If the gun turns out as well as I suspect I plan on making a couple more designs to be mounted in a display case.  All of the components for the Scrooch gun are held together with a 10" long threaded rod that runs through the center of the toy.  The pistol grip and trigger are bolted into place to the lower mounting just below the yellow cylinder. I think it will be an interesting project that will be fun to make and display. 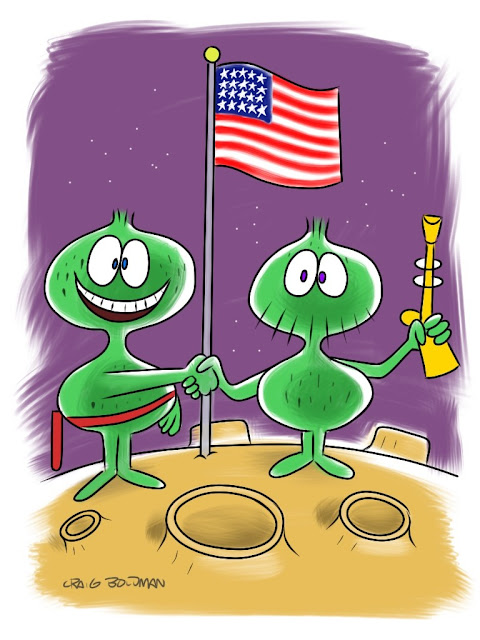 I just could not resist posting the image above that I tracked down online of Gidney and Cloyd from the Rocky and Bullwinkle show.  Here they are standing on the moon with their Scrooch gun in hand.  My version is a lot more elaborate then theirs but my version is at least 55 or 60 years newer than theirs.  Anyway I think this will be a fun project to play around with.  I will post more about the Scrooch gun once I get all of the parts gathered together and can show you the entire process of how I assemble it.

If you have never seen the Rocky and Bullwinkle show track it down online as I am sure you will get to see these little characters and get a laugh or two when cartoon were made during a simpler time.

Posted by Dave Langkamp at 5:14 PM