The Second Steadicam Is Completed!

This past week I was thrilled to finally find in my mailbox the last piece that I needed for my second Steadicam that I started work on in mid April.  This critical piece was the adjustable mounting plate for the video camera.  Without it I could not complete the build of my new design.  For those of you who do not know what a Steadicam is or what it does for video I will clue you in.  This device takes the roughness out of video being shot while hand holding a video camera.  It was first used and developed for the movie "Rocky".  Since that time you have seen the end result of this device in scores of movies.  Most commonly used where a camera is following or leading an actor down the street and the director wants a smooth flowing shot without the camera bumping up and down from the cameraman's movements.  These professional devices are VERY expensive and just now have started to show up for the amateur videographers like myself.  So with that in mind I decided to build my own Steadicam this being the second design. 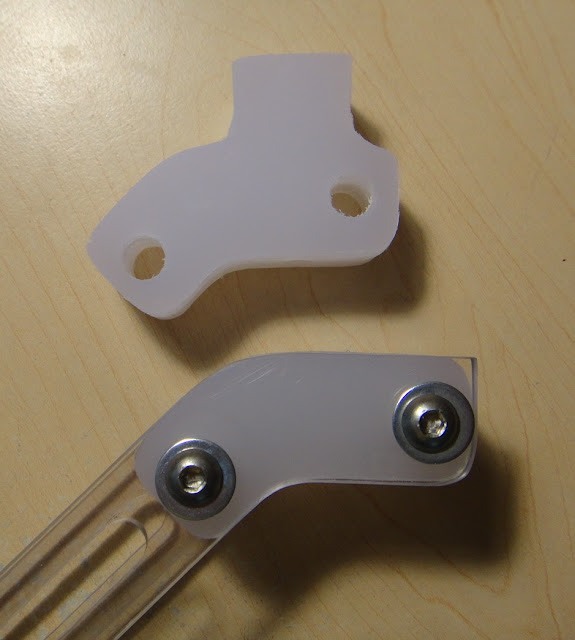 With any new design there are always bugs that need to be worked out of it.  This design was no exception to that rule. The picture above shows the upper mounting portion of the acrylic arm as I first designed it.  It looks good but that's about as far as it goes.  It simply did not work when mounted to the adjustable "C" shaped slider video camera rail.  I could not get the arm to balance and so a redesign was called for. The first arm being made out of fiberglass did not have the mounting hardware that you see in this shot.  This in turn caused the arm to be mounted further rearward on the slider rail.  This also caused an interference problem that would not allow me to make proper adjustments to balance the Steadicam.
What I did to correct this was redesign the original spacer mount that you see here with a modified spacer that has an extension on it to allow clearance for the balance arm.  Once this was done I cut it out the new part on the CNC machine and with a bit of sanding was ready to mount it. The original fiberglass arm on the first design was narrower and could be mounted on to the slider rail without the use of a spacer. 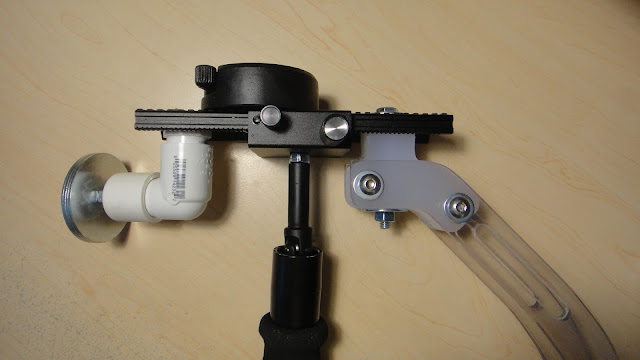 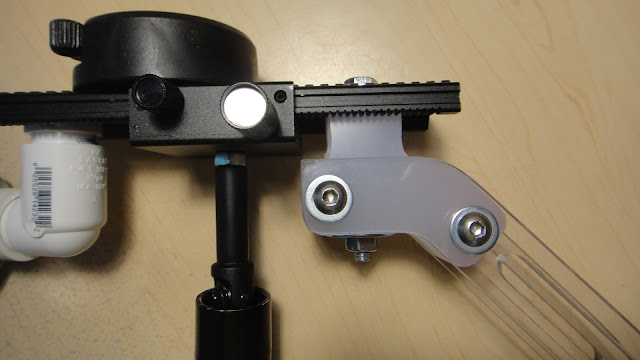 Here are a couple of shots of what the new upper mount looks like in place on the Steadicam.  The extension on the new mount allows for an additional clearance both vertically and horizontally as the slider is adjusted to balance the Steadicam with the camera mounted to it. 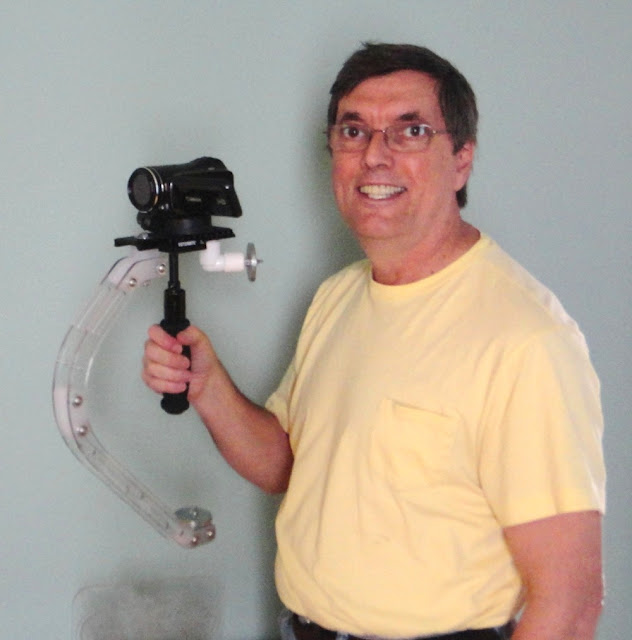 Here is a good shot of me holding the new design which gives you a good idea of the size of the Steadicam.  This completed arm took around two hours to construct using my CNC machine to cut out the balance arm parts. Then came sanding, polishing, and assemble.  This is a vast improvement over the fiberglass design as it took around eight hours to build over a weeks time. The cost is higher on this arm due to the material used but in the long run will be much easier to fix should something catastrophic happen to it. (I don't even want to think about it!)

Here is a little video that I put together this morning showing you the difference in what the Steadicam can do for your camera work. Keep in mind here that I have only had about a half hour of practice using this new Steadicam so I am no expert when using it yet.  But just with what I have shot here is a vast improvement over the video shot without using it.

For those interested in the numbers.....  The original fiberglass design cost around $40 to build.  This new design is closer to $80 to build.  Both turned out well and both had their advantages and disadvantages in the building of them.  I for one like the new design simply because of the ease of construction, less build time, and easier repair.  If you had to repair the fiberglass design or replace it due to major damage it would take another week to build a new one.  This design you could salvage all the good parts and only replace what needed to be to make it work once again.  A lot less time to do so.  All in all it will make a nice addition to my video camera equipment.