Another CNC Machine Build..... But Smaller And Cheaper 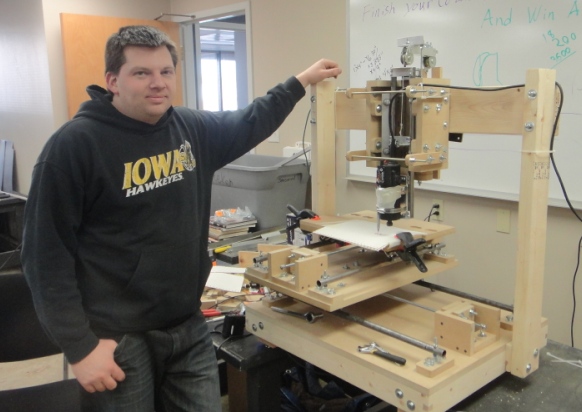 This is my friend Neal Meeker from the QC Co-Lab maker space in Davenport Iowa with his newly designed and hand built desktop CNC machine.  I was fortunate enough to be at the Co-Lab yesterday to give advise and watch his new machine come to life after Neal had spent the last couple of months building it.
Neal did a lot of research online to figure out how to come up with his design that only cost him around $300 to build.  As you can see from the photos below he managed to get the machine to do some test drawings for the first time running which is a big step forward for any new design.  Drawing on a piece of paper is cheaper than ruining a good piece of wood or worse yet damaging a CNC bit or the machine itself.
The machine is mostly made of MDF board and stock hardware parts. It can run up to 20 inches per minute using small stepper motors and a USB connection to Neal's laptop.  The software is also custom designed for the machine and is fed to the stepper motors using an Arduino circuit board.   This in turn will make everything move including the trim router for cutting and engraving of parts up to twelve inches square.
Great work Neal!  I can't wait to see it cutting the first parts. 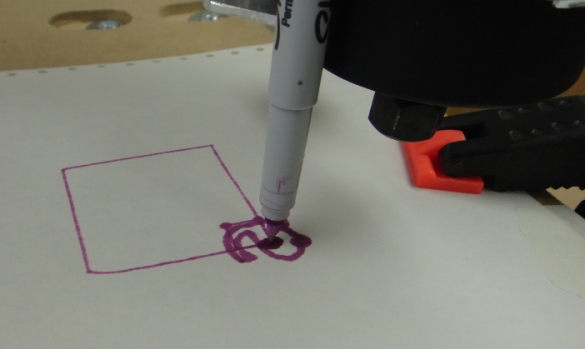 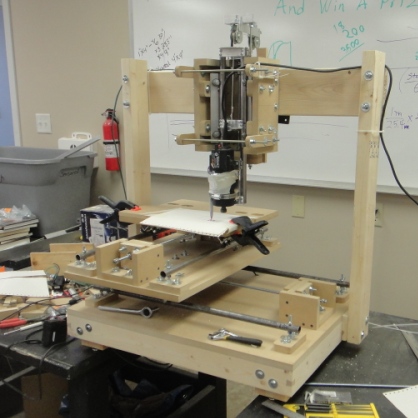 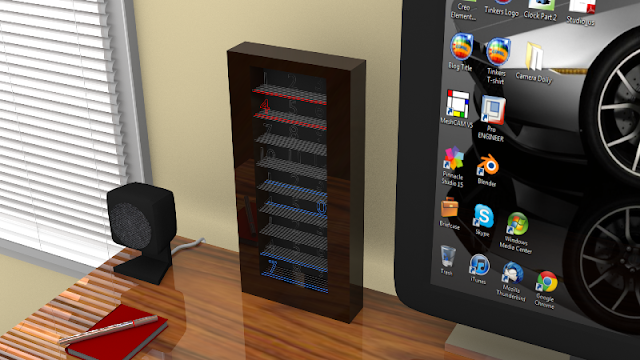 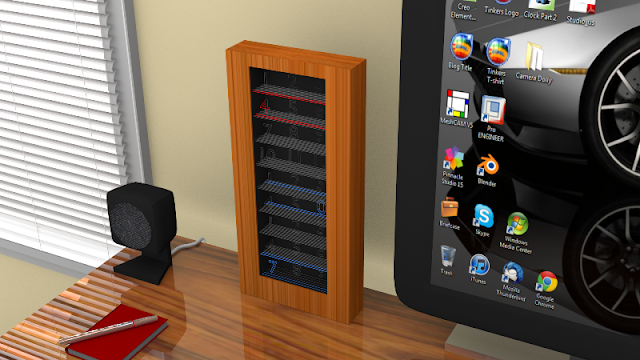 Today I have been working on some concepts of a new clock that I have in mind. The internals of the clock are displayed using the same principals as the Angel display shown below.  I used Blender 3D software to do this work and I think my efforts have once again paid off nicely.  I have two similar yet different clock displays shown as though they were already built and sitting on my desktop. 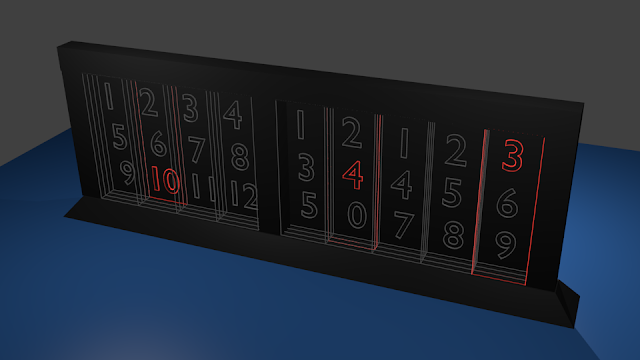 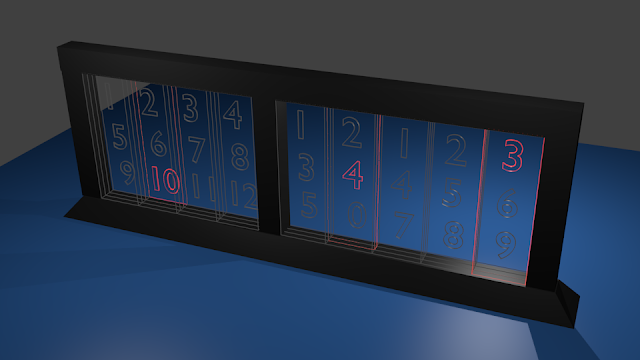 The original clock was laid out in a horizontal layout but after doing some calculations and looking at the dimensions of it, this did not look good.  It would have taken up way to much desk space. The vertical layout you see here seemed to be a better idea.  It still could display the clock numbers the way I wanted and yet take up a lot less space at the same time.  Also the clear display was discarded as it made reading the clock more difficult to do so.

As you have seen in previous posts I use Blender 3D software a lot in the creation of many of my projects.  It's a free way to see if and idea is even worth looking at and I can do the concepting work in a fraction of the time it would take using engineering modeling software.  I think the clock will be a worthwhile effort to put together.

My friend Steve Hamer from the QC Co-Lab maker space in Davenport Iowa helped me test out the display idea using high intensity LED lights and so far it looks promising. The next step is to make the display a bit brighter (maybe double up the amount of lights?) and figure out the outer case as you see here.  I like the black case but the wooden case would also be very nice and probably simpler to put together. Just will have to keep plugging along on the idea. Once step at a time..... one step at a time. 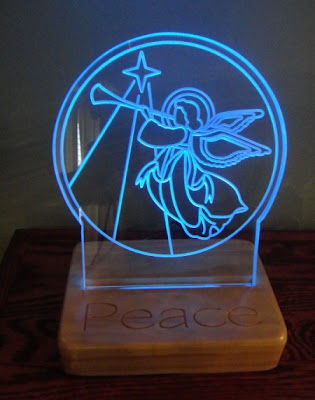 Posted by Dave Langkamp at 5:42 PM No comments: Links to this post

This is a little video that I put together to show off the update that I just completed on the Makerbot Video Camera Dolly that I had built months back.  The video looked so good that I decided to use it as a promotional video for my blog site here.  Check it out and let me know what you think of this project, the video or anything else that I have up on my site.  Enjoy.
Posted by Dave Langkamp at 6:30 PM No comments: Links to this post

Today I was able to finish the video editing for part two of the tour of the QC Co-Lab maker space in Davenport Iowa.  In this video we continue the guided tour of the maker space with Steve Hamer the president of the group that we started in part one. Steve shows us the different work spaces, tools, and equipment that is available to anyone interested in creating, build, or designing a project that they need help with or simply do not have the space to do so at home.
I have been with the group for almost a year and a half now and there is always something new being worked on or planned at the Co-Lab.  Check out the videos and the website (www.qccolab.com) for more information.
Posted by Dave Langkamp at 9:36 AM No comments: Links to this post

Today I spent a good portion of the day working on the Solsylva CNC machine I have been building in Davenport Iowa which I've video taped for my blog here.  Along with this work I was able to persuade my good friend Steve Hamer of the QC Co-Lab maker space who also is the president of the group to allow me to video him giving a guided tour of the space.  The amount of video that I filmed was quite large which I was happy about but I had to split it up into two parts for easier viewing, editing, and placement online.  Here is part one of that video. Part two will be posted here as soon as I get it edited.  Enjoy the tour.
Posted by Dave Langkamp at 8:46 PM No comments: Links to this post

This week members of the QC Co-Lab maker space (Davenport Iowa) and I started assembling a good portion of the parts for the Solsylva CNC machine. With the helping hands of John Richards, Ben Ziegler, and Steve Hamer work progressed nicely.  Steve is the president of the QC Co-Lab maker space and is a driving force when it comes to projects like this one.  These friends of mine are shown in the video putting the machine together as I directed the construction and handled the camera work.  It's much easier having someone else handling the tools while trying to create video at the same time.
A group effort that makes this whole project that much easier, fun, and better in the long run. Enjoy this installment of the build and see how easy it is to put one of these great machines together.
Posted by Dave Langkamp at 3:13 PM 1 comment: Links to this post

This week at the Tinker's Workshop I continue on with the building of the Solsylva CNC machine designed by David Steele.  This video covers a lot of the parts that I have made which will be assembled in the coming weeks (with videos of course) for the CNC stand and major components of the CNC machine itself.  It will start taking shape here very quickly in the coming weeks so keep checking in and see what it is all about to build your own machine for your workshop!
Also if all falls into place I will be putting together a video tour of the QC Co-Lab maker space in Davenport Iowa very soon. I hope to get this video shot over the coming weekend along with interviews of a few of the members of the maker space. This should be interesting and fun at the same time.
Posted by Dave Langkamp at 5:30 PM No comments: Links to this post